April 10th, marks the 23rd anniversary of your brutal assassination. At the time, I was 17 years old and in church with my family, as it was Easter weekend. Our priest, Reverend Hlazo, abruptly departed from his prepared sermon and said: "MaTopiya amahle, amabhulu ambulele uChris Hani. Thixo! Sisilingo santoni esi?".

After these words, the mood in our church changed instantly and there was a pervasive feeling of deep sadness. I spent the remainder of that day in front of the TV with my Timer, watching the various reports on your death. And one image that remains forever etched in my memory is that of you in your blue tracksuit, with your head buried in a pool of your own blood, outside your drive way.

In addition to the pain I felt as a human being, as a Black Consciousness/Pan Afrikanist adherent, the pain was made worse when I later learned that the person who pulled the trigger was a white settler. You may be wondering why I am sharing all this with you.

I am sharing this with you to make the point that, at the time of your assassination, I was fully aware that you and I don't necessarily share the same political ideology, but I was connected to you by two things. The fact that you were one of those Sons of Azania, who had dedicated his life to our people's quest for dignity and that, as a Black person, you and I had a common enemy.

You are obviously not around to speak for yourself and express a view on the things that now characterise our national politics, and in particular those that have now become a feature of your political home-the ANC. I naturally continue to wonder where you would be standing in relation to all that is now happening in our country and your political home.

In my incessant search for answers, I found a memorandum, which you reportedly co-authored while in exile and sent to the ANC leadership in exile. I thought on this day, given the national mood and need for us as a people to periodically pause and ask ourselves difficult questions-it may be useful to share an extract of what is now known as the Hani Memorandum. Bab'uHani, I have immense respect for you (and others like you) and appreciate your sacrifices. The memorandum follows here below.

This is an extract from The Hani Memorandum for which he and six others were expelled by the ANC NEC in exile in 1969 (and almost executed) but later reinstated. 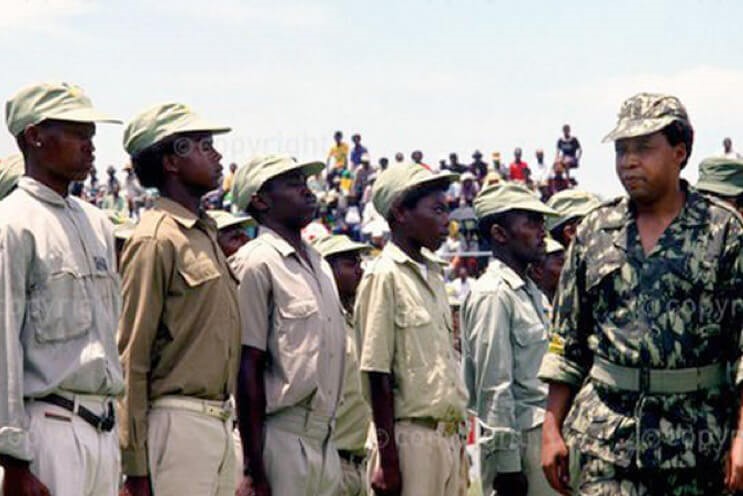 The ANC in Exile is in a deep crisis as a result of which a rot has set in. From informal discussions with the revolutionary members of M.K. we have inferred that they have lost all confidence in the ANC leadership abroad. This they say openly and in fact show it. Such a situation is very serious and in fact a revolutionary movement has to sit down and analyse such a prevailing (sic) state of affairs.

As the leading revolutionary core of the Organisation it is imperative for members of M.K. to participate in all matters affecting the revolutionary struggle in South Africa. We raise the above points so as to arrest the present trend.

We, as genuine revolutionaries, are moved by the frightening depths reached by the rot in the ANC and the disintegration of M.K. accompanying this rot and manifesting itself in the following way: The ANC Leadership in Exile has created machinery which has become an end in itself. It is completely divorced from the situation in South Africa.

It is not in a position to give an account of the functioning branches inside the country. There has never been an attempt to send the Leadership inside since the Rivonia Arrests. There has been an overconcentration of people in offices – this has become a fully-fledged activity in itself.

We are disturbed by the careerism of the ANC Leadership Abroad who have, in every sense, become professional politicians rather than professional revolutionaries. We have been forced to draw the conclusion that the payment of salaries to people working in offices is very detrimental to the revolutionary outlook is of those who receive such monies.

The Leadership of the ANC abroad must be committed to a resolution and programme of going home to lead the struggle there, which resolution and programme must be seen to be implemented. Presently there is a Leadership vacuum as all the leaders are either locked up in Vorster’s prisons or are in exile. This has deprived the S.A. masses of leadership which is so vital at this crucial moment of our Revolution.

There are certain symptoms which are very disturbing and dispiriting to genuine revolutionaries. These comprise the opening of mysterious business enterprises which to our knowledge have never been discussed by the leadership of the Organisation.

For instance, in Lusaka a furniture industry is being run by the ANC.47 in Livingstone a bone factory whose original purpose was to provide cover for underground work in Botswana is now being used as a purely commercial undertaking. As a result of these enterprises more and more M.K. men are being diverted to them. And some of the people in charge of these enterprises are dubious characters with shady political backgrounds.

We are therefore compelled to conclude that there is no serious drive to return home and carry on the struggle. An equally disturbing situation is that M.K. is being run completely independently of the Political Organisation. The Political Leadership Abroad is not aware of the activities and plans of M.K. We therefore infer that M.K. is separate from the ANC; that there is conflict between the ANC and M.K.; that the ANC has lost control over M.K.; that there is no co-ordination between the ANC and the M.K.

All this has brought about a situation where the ANC is run single-handedly by the Commander-in- Chief who appoints and dismisses arbitrarily – as a result there is a tendency among members of the Headquarters to owe allegiance to the individual who appoints and dismisses them and it takes a genuine revolutionary to challenge him. We are compelled to blame the National Executive for this anomalous situation.

The Security Department is internally directed. It is doing nothing against the enemy. It has achieved nothing of military importance. The failure of the so-called Security Department has been shown by its inability to furnish the Organisation with the fate of our most dedicated comrades in Zimbabwe.

Or how is it possible that so many comrades have been able to desert so successfully? In the prosecution of its internally directed activities the Security Department has become notorious. Those who serve in it have the central task of suppressing and persecuting dedicated cadres of M.K. who have nothing to lose by participating in the struggle except their chains.

The tragedy of the Zimbabwe campaigns is the fact that we have been unable to analyse our operations so as to be able to assess and draw lessons that would make it possible for us to formulate a correct strategy and tactics vis-à-vis the enemy.

It is a cause for serious concern that comrades who have come back from the battle front have not been accorded a comradely reception and the fact that there has been no re-appraisal of their combat experience. We are shocked by the criminal neglect of our most dedicated comrades who have either fallen in battle, sentenced to death or serving long term imprisonment in Zimbabwe.

We are perturbed by the fact that certain members of M.K. are receiving payments from the External Mission, e.g. the C-in-c and the C.P.O. who as a matter of fact are getting allowances and the fact that the C-in-C has a posh and militarily irrelevant car at his disposal. The fact that these soldiers are paid has a very demoralising effect on the other revolutionaries.

Individual leaders keep cars and run them and this coupled with the fact that they receive salaries alias allowances is in every way building them up as a middle class in our revolutionary organisation and in M.K. A strange and alarming trend is developing whereby secret trials and secret executions have been carried out. We are not against the execution and liquidation of traitors but we are against the veil of secrecy.

The ANC is the vanguard of the revolutionary struggle in South Africa and it is strange that its leaders have not been obliged to take the M.K. oath. We strongly feel that there is no difference between the leaders of the ANC and men of M.K. who are obliged to take the oath, for such an oath might have dealt with J. Radebe’s 63 desertion and will definitely deal with any other leader harbouring right wing designs of sabotaging our revolution.

The development of the Revolution has necessitated a renewal and rejuvenation of those who are leading it. We must guard against the fossilization of the leadership as this is likely to hinder the progressive development of the Revolution. There has been a tendency to appoint people to the National Executive outside. We would like to know what is the yardstick for these appointments.

It is very alarming that double standards as regards to health of the members of the Organisation are maintained. Whenever leaders are sick, arrangements are made for them to receive excellent medical attention without delay but this sort of concern is hardly shown to the rank and file of the movement. We maintain that all of us are important in so far as the Revolution is concerned and should thus be accorded the same treatment.

We consider the youth in M.K. as the most revolutionary. We strongly feel that we should be consulted on matters affecting the youth. For instance, we must be informed about the revolutionary International Youth gatherings and we should be given priority in the sending of delegates. The farce of the Bulgaria ANC Youth delegation should never be repeated and those responsible should acknowledge the mistake they made.

The Youth of South Africa is not located in London or in any European capital. We therefore take particular exception to the appointment of certain students as leaders of the ANC Youth. Thabo Mbeki who went to London on a scholarship sponsored by NUSAS is a leader of ANC’s bogus Youth Organisation.

We are convinced that the ANC leadership in Exile is according better treatment and attention to the students. This attitude and practice has had a disastrous effect of diverting many would-be revolutionaries into the academic field.

We call for a full definition of the ANC-Z.A.P.U. alliance, its form and content. We demand that a serious and genuine effort should be made towards the intensification of ways and means of going home. This should be one actively involving the most dedicated members of M.K. and it should be on the basis of a correct strategy.

In conclusion all these problems must be resolved by a conference between the ANC Leadership and members of M.K. and not just handpicked individuals.

1
The Nyaope Of Whiteness
2
Black World Salutations: Brother Arnold Ap
3
They Are Capturing Our Young