Goodman Gallery is pleased to present Markers of Presence, an exhibition of colour photographs by David Goldblatt. In the late 1990s Goldblatt began exploring the use of colour in his personal photo-graphy. Prompted by a new political dispensation in post-apartheid South Africa, as well as techni-cal advances in digital reproduction, Goldblatt felt that colour best captured his feelings about the time.

“Lyricism seemed not only permissible but possi-ble. In the late ‘90s I became aware of colour as a particular quality of this place and its light that I wanted to explore. It seemed ‘thin’, yet intense,” wrote Goldblatt in the publication, Regarding In-tersections (Steidl, 2014). 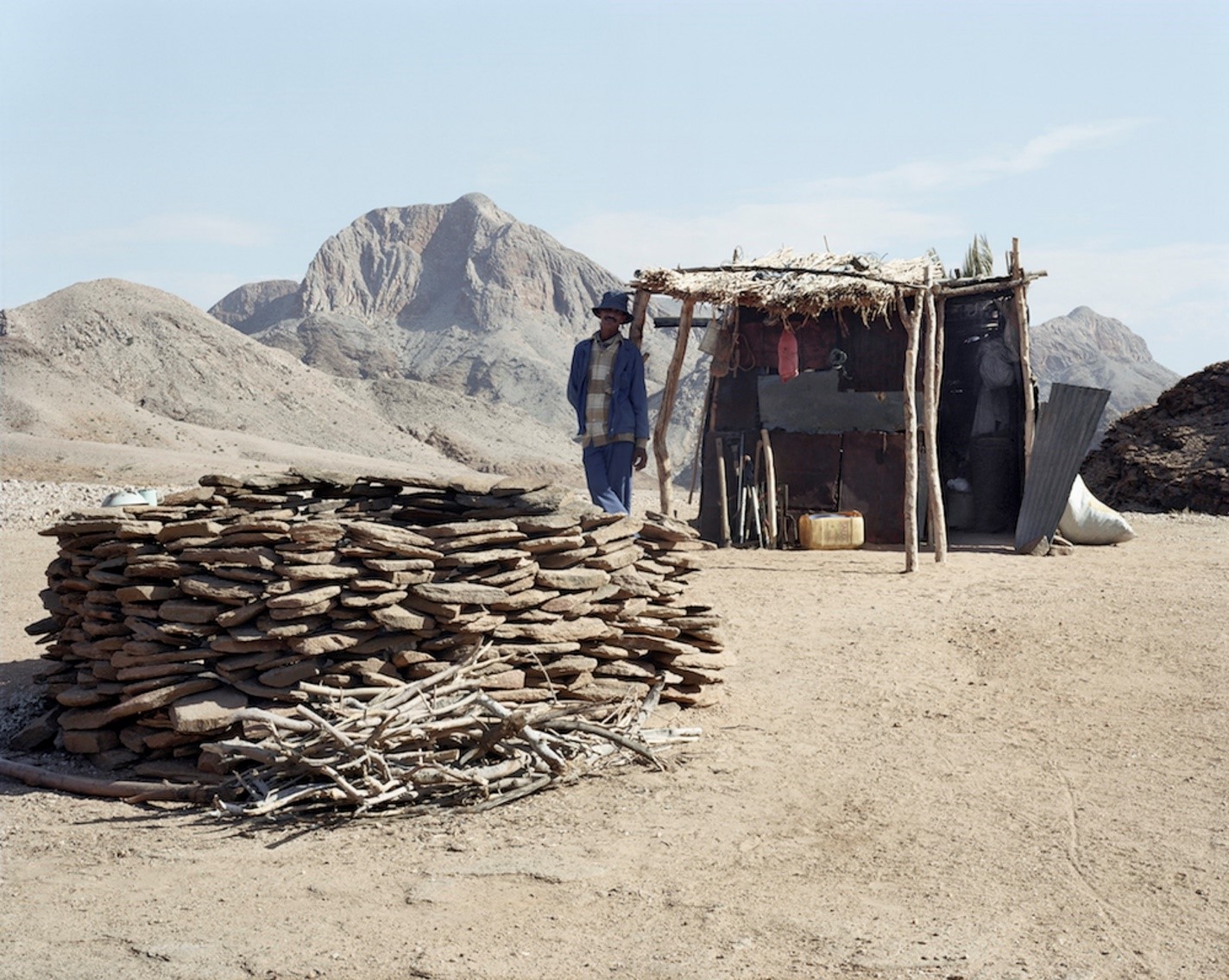 Goldblatt’s colour photographs are collected un-der a wide-ranging essay, Intersections, a body of work made between 2001 to 2012, subsequently published as Regarding Intersections and Inter-sections Intersected. This work included explo-rations of land and landscape, people, towns and monuments - all held together by Goldblatt’s fun-damental interest in our values as a society, and how we express those values in the marks we make and leave behind. Markers of Presence presents a cross-section of photographs from Intersections. In light of the searching spirit that preoccupied Goldblatt during this period, the exhibition brings together five currents that underpin the series.

i. Fuck All Landscapes

Driving across South Africa in a kitted-out camper-van, Goldblatt describes the landscape as “deep, bland, vast and seemingly featureless.” He wrote that “precisely in these qualities is a presence that is difficult to hold or suggest in photographs. As soon as you try to bring what is before you into some sort of visual coherence, it eludes, it seems to move away. There seems no focal point, no way of coherently containing it. Often it is what I call a ‘fuck all’ landscape. Somehow one has to find ways of being true to what is there and yet brin-ging it fully to the page or print.” (Regarding Inter-sections, 2014)

On the farm Frenda, near Warden, Free State (4 May 2002) speaks to this predicament - one that Goldblatt confronted and embraced in succeeding photographs of the Highveld and Greater Karoo. There is nowhere for the eye to go, no centre to hold. There is something to be sensed, a narrative or feeling that could reveal itself to those who are willing to look.

“I don’t see a farmer’s fence so much as an intru-sion as man’s way of being in the landscape. It se-ems a necessary way of adapting himself to the land and the land to him.” (David Goldblatt, Regar-ding Intersections, 2014).

Many of Goldblatt’s colour photographs contain markers of human presence: roads, fences, tele-phone poles, farm gates and road signs. Yet, as Goldblatt wrote “I don’t think that I actively look for some marker in the landscape, I look rather for landscapes in which these aspects have come to-gether in some way that has integrity about it.” (Regarding Intersections, 2014) The presence of fences that traverse the landscape, as seen in Ui-tkyk, Bushmanland (27 June 2004), are also in Gol-dblatt’s view, symbolic of the division and posses-sion of land in South Africa. 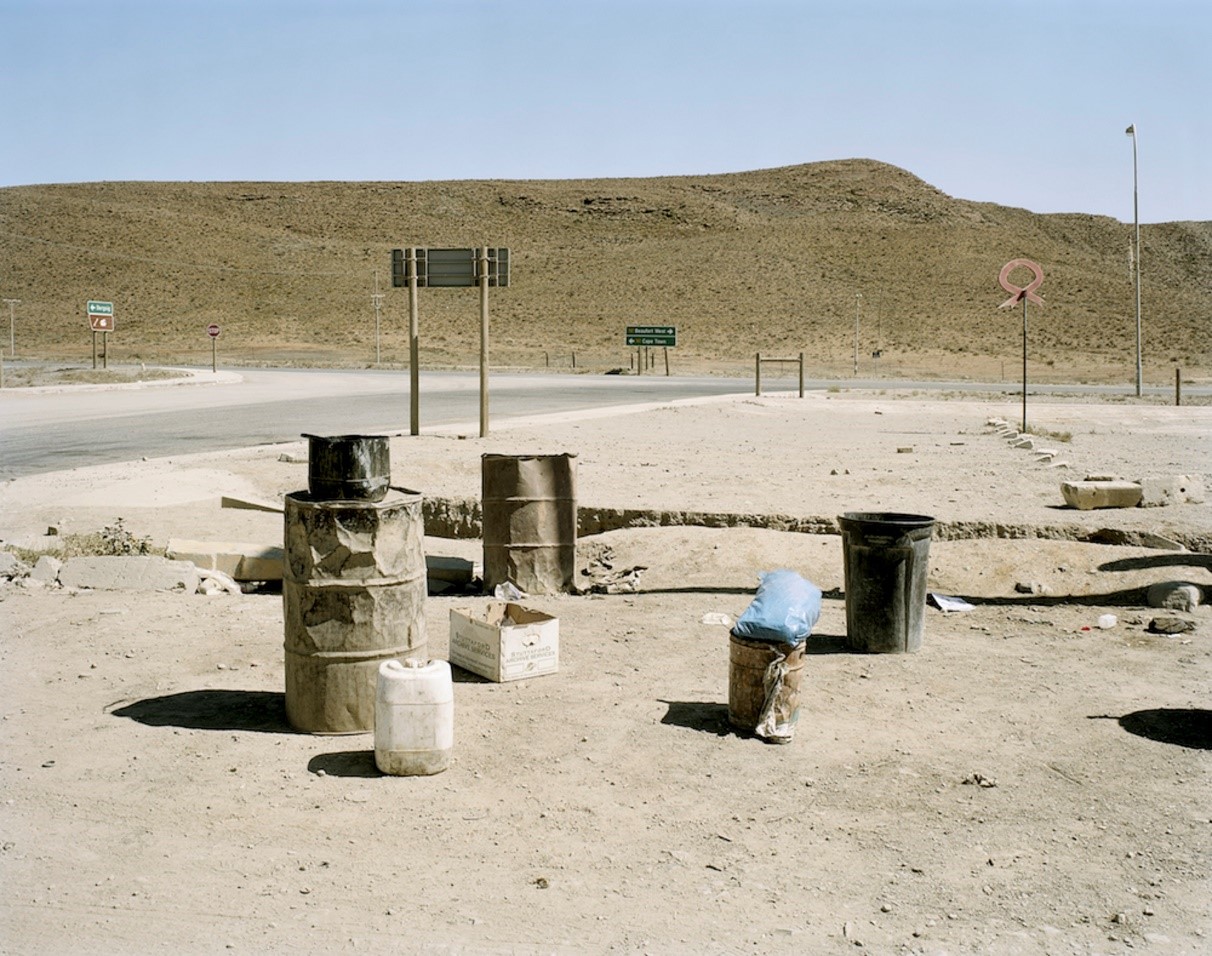 The centrality of land ownership and disposses-sion to South Africa’s history and present perme-ate the images from Intersections through Gol-dblatt’s oblique way of looking. Johnny Basson, goatherd, Rooipad se Vlak, Pella, Northern Cape (2004) features a member of the swerwer com-munity, people Goldblatt often encountered on the road. Goldblatt wrote, “the swerwers are by nature nomads, preferring to be on the move. But where their ancestors roamed territory freely, as hunters and pastoralists, the swerwers are confined to the spaces between farm fences and roads.” (Regar-ding Intersections, 2014)

In the Time of Aids is a grouping of photographs Goldblatt made within Intersections. As he drove around the country during the time when the AIDS epidemic was seldom discussed openly, and acti-vely denied by some leaders in the South African government, he looked for signs that people made in their landscapes that spoke of the crisis. Entran-ce to Lategan’s Truck Inn, In the time of Aids, Lain-gsburg (14 November 2004) depicts a circular ar-rangement of debris and metal drums on the side of a road. To the right of the koppie in the back-ground is a pole with the AIDs ribbon attached to it - a barely visible reminder of the epidemic.

Willem Voster with friends, family, home and gar-den, Merweville (2 March 2009), devised as a trip-tych, sees Goldblatt photograph Willem Vorster’s property within and then outside the fence, looking back at the place he had just stood. Goldblatt brin-gs his position within the photographic frame to the fore and presents different perspectives throu-gh which he might compose an image. This gives the viewer an awareness of Goldblatt’s presence in the scene and his relationship to the subject.

A poem by Maneo Mohale, titled the names, written in response to the exhibition is available to visitors.

Markers of Place is taken from the title of an es-say by Michael Stevenson, written for Regarding Intersections.