Neo Matloga (South Africa, 1993) lives and works in Amsterdam, where he had a two-year residency at De Ateliers. In 2018 he won the Royal Prize for Modern Painting. The jury called him a storyteller with guts. Early this year Matloga was also nominated for the Volkskrant Beeldende Kunst Prijs 2019. His collage paintings reflect on love, intimacy and family life after apartheid and is portrayed in black, grey and white tones. In his large paintings he tries to bring to life missing elements in Western history. The exhibition neo to love is his first solo museum exhibition and can be seen in the Fries Museum from 20th April to 18th August 2019.

Neo to love presents new life-size works by the young artist, which depict socially confirmed scenes from his childhood. His intimate paintings, drawings and collages portray people having conversations, dancing or showing affection in turbulent times: all universal social expressions. Matloga questions notions of what is normal and what is exotic, a criterion that is strongly influenced by Western perception. He has created the new works especially for the exhibition in the Fries Museum. Inspired by a visit to Rembrandt & Saskia: Love in the Dutch Golden Age, he immersed himself in the theme of intimacy during the 17th century. With his new works Neo Matloga fantasizes about the impact he would have had as a painter in Rembrandt’s time. 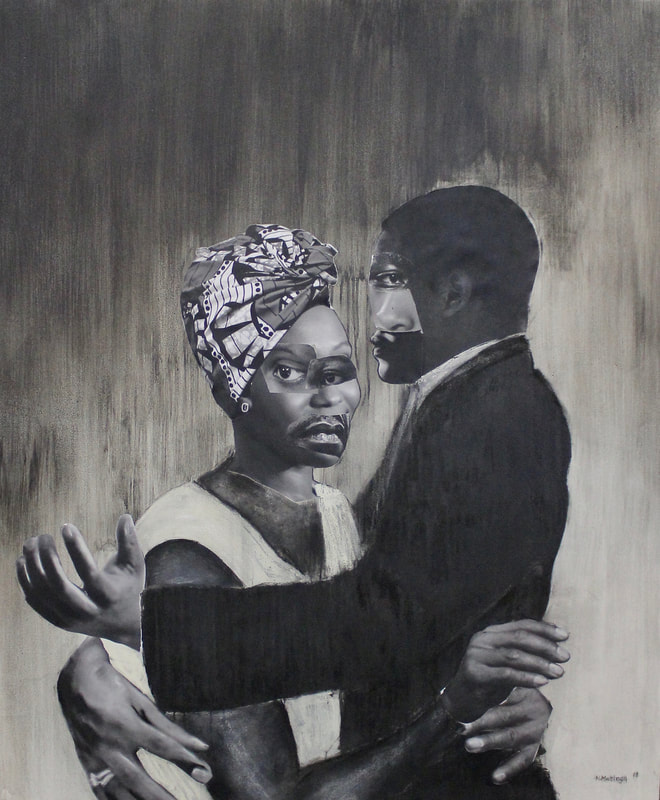 Although the subject matter of Neo Matloga’s canvases is domestic - daily life in black households in the artist’s native South Africa - they often have the epic scale of 19th century history paintings. Like his use of primarily black, white and grey palette, or the way he titles most of his works in his mother tongue, Sepedi, this decision is not without its political connotations, or its ambiguities. With their enamel tableware and crocheted tablecloths, his interiors are ordinary spaces, no more exotic than a suburban American home, although - to a global audience, at least - they are considerably less familiar from movies and TV. On these vast, charcoal and ink wash stages, Matloga’s cast of characters play out every-day dramas, experiencing all the struggles and consolations of desire and intimacy. Above all, the people in his canvases are as he says, ‘moral agents’, however much socio-economic and political conditions shape life outside (and, indeed, inside) the four walls of their homes.

Notably, Matloga’s characters are hybrids, their faces formed by collaging together photographic images of friends, family, and famous South African figures from politics and the arts. Physiognomy, here, is often out of whack. Eyes, mouths, and ears appear outsized, skin tone undergoes abrupt changes, hairstyles and hats sit atop the wrong heads, and accessories such as jewellery and cigars are often comically misplaced. On one level, we might interpret Matloga’s hybridisations as pointing to the vicissitudes of individual identity - the fact that the self is a kind of Frankenstein’s monster, in a state of permanent flux - but they also have a more pointedly political purpose.

Writing about his use of this technique in his series of works on paper, Black collages (2018), the artist has commented that ‘if there’s a possibility that a black face is seen as a distortion, what I’m saying is, OK, here, you have this image of the distortion, which was already there in your prejudices or racist gaze. The process of cutting, reconfiguring, and collaging facial anatomy is my way of trying to identify with the racist gaze, thereby dis-appropriating its oppressive power’.

In contrast to the characters that Matloga presents in his domestic canvases, all of whom inhabit the same physical space, and all of whom (no matter how smooth or rough the current emotional weather) are bound by the ties of family and community, those that populate the Black collages are isolated against a white, featureless ground. Facing the viewer, their bodies cropped at the neck or chest, they look like images from a bureaucratic database, assembled to unknown ends. Presented en masse, these works have a curious, cumulative power. We begin to wonder what connects them, beyond the obvious answer embedded in the series’ title. Then we begin to wonder what keeps them apart. – Tom Morton