“You’ve Got to Sneeze the Knees to Disease with Ease”

In these quasi-apocalyptic quarantine days of The Rona, The Cororo, The Coronavirus, fede fede known as COVID-19, we are reminded of the most popular sneeze in our country, not the one from that other bhayskop penguin, but the one that has become a landmark of South African lyricism; this is the timeless sneeze of the knees.

There is thus moreover hitherto no better time than the now to overhaul the hallowed pandemic that has plagued the magnum opus of one of the first South African woman rappers, The Queen Herself, The FYI (Forever Young Indefinitely), and Forever Blazing Bae, Thembi Seete. For over two decades people from all over the globe have wondered restlessly about what The Queen spits in her lyrics from the Boom Shaka classic, It's About Time. Now, Lil’Hussil with a team of lyrical experts unearthed the lyrical genius for the new breed of rappers to learn the importance of Bars, but most momentously, for all of the world to be in awe. 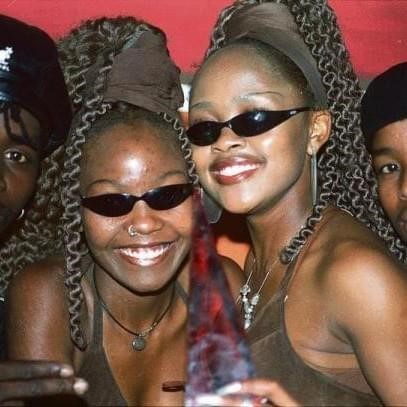 It's About Time by Boom Shaka!
Thembi Seete AKA Thè Thè:

Oh yeah! This the time for Boom Shaka
No need to bore me,
It can do something for you,
'Cause yeah, Thè is the place and I’m gonna kick the roster,
I break it, I kick, I hit, hard yeah!
That’s how Boom Shaka does yeah!

Ah! Aha! Check check this out!

Aha! Don’t let people ever tell you to do what, (yeah)
Ask for something in nothing and nothing goes to you,
You’ve got to cease the needs that disease with ease,
And lets get busy yoh with my gift.

What you think about this Lebo?
(About what Thembi?)

Bringing young African rap, Lebo,
You know their lies and their big yap cause,
And the rhymes that I get from the caricatures they sketch,
When I step in their area they’re always scared!

There isn’t much to say about this lyrical genius except that we were wrong all along, The Queen does not say, “You gotta sneeze the kness…” Even in her grammar The Queen bares no blemishes.

With the State of Disaster and 21 days of quarantine, a many of us find ourselves, humming at the deepest core after hiding a sneeze in our elbow’s pocket, “I don’t know what can I do with myself.”

This takes us to another need to remedy an epidemic. There have been acres of shade cast upon The Queen about her most popular hook:

"I don't know what can I do with myself? x3 Ha ke tsebe nkae ketsang!"

This is the part where Lil’Hussil points out The Queen’s failures, but even in her lyricism the Queen bares no blemishes. After much deliberation we deciphered the accuracy in The Queen’s hook. Behold:

The hook is comprised of a statement, a question, and a reply. "I don't know" is the statement, disclosing her present stance. This leaves us with a question of what it is that she doesn't know, she then brings us to light with her question, "What can I do with myself?". She subsequently gives a reply to this question saying, "Ha ke tsebe nkae ketsang." expressing that she actually really doesn't know what to do with herself.

Furthermore, there’s a brilliant poetic device at play in this most slept-on hook, "Revolution", this is when a line is phrased through repetition to give two or more different meanings; it sounds as though the line is revolving bringing a different meaning at the end which is another beginning. Now in The Queen’s hook, the initial stance found in, "I don't know" becomes a reply in itself when revolved:

Note how the "I don't know" shifts from its initial stance of not knowing to being a reply of confirmation and certainty to that stance; she then brings an emphasis of this stance by declaring with her native tongue that she actually does not know. The native tongue in this instance is used as another poetic device, that of Emphasis, it expresses that when one is at a state of complete confusion they surrender themselves to their root selves. The Queen serves the rhythm with her phrasing. Note that there are 4 one-syllable words in the first phrased line, "I don't know what /" and 4 one-syllable words in, "Can I do with..." aided by a two-syllable word, "myself" to complete the second phrased line. You have to admit that even the sonic approach to the hook is sound. Bars on Bars!