Spring in Johannesburg is set to be filled with sounds created by a diverse range of amazing artists at one of the city’s most eagerly anticipated annual events.

The headline acts for this year’s Fête de la Musique Joburg have been announced. Award winning jazz trumpeter Mandla Mlangeni; afrocentric ancient futurists The Brother Moves On; pioneering art rockers Blk Jks and SAMA awarded songstress Maleh will be on stage at four locations as part of this popular festival on the 18th of September 2021.

Selen Daver, the Cultural Attaché for the French Embassy of South Africa, said, "Over the last decade, Fête de la Musique has grown to be one of the most anticipated experiences amongst avid festival-goers in Johannesburg. After the postponement of last year's event, we are happy to be back again, this time in four different locations, with limited capacity to ensure everyone's safety. Our goal is to make live music accessible for all while giving young musicians a space to reach a broad audience." 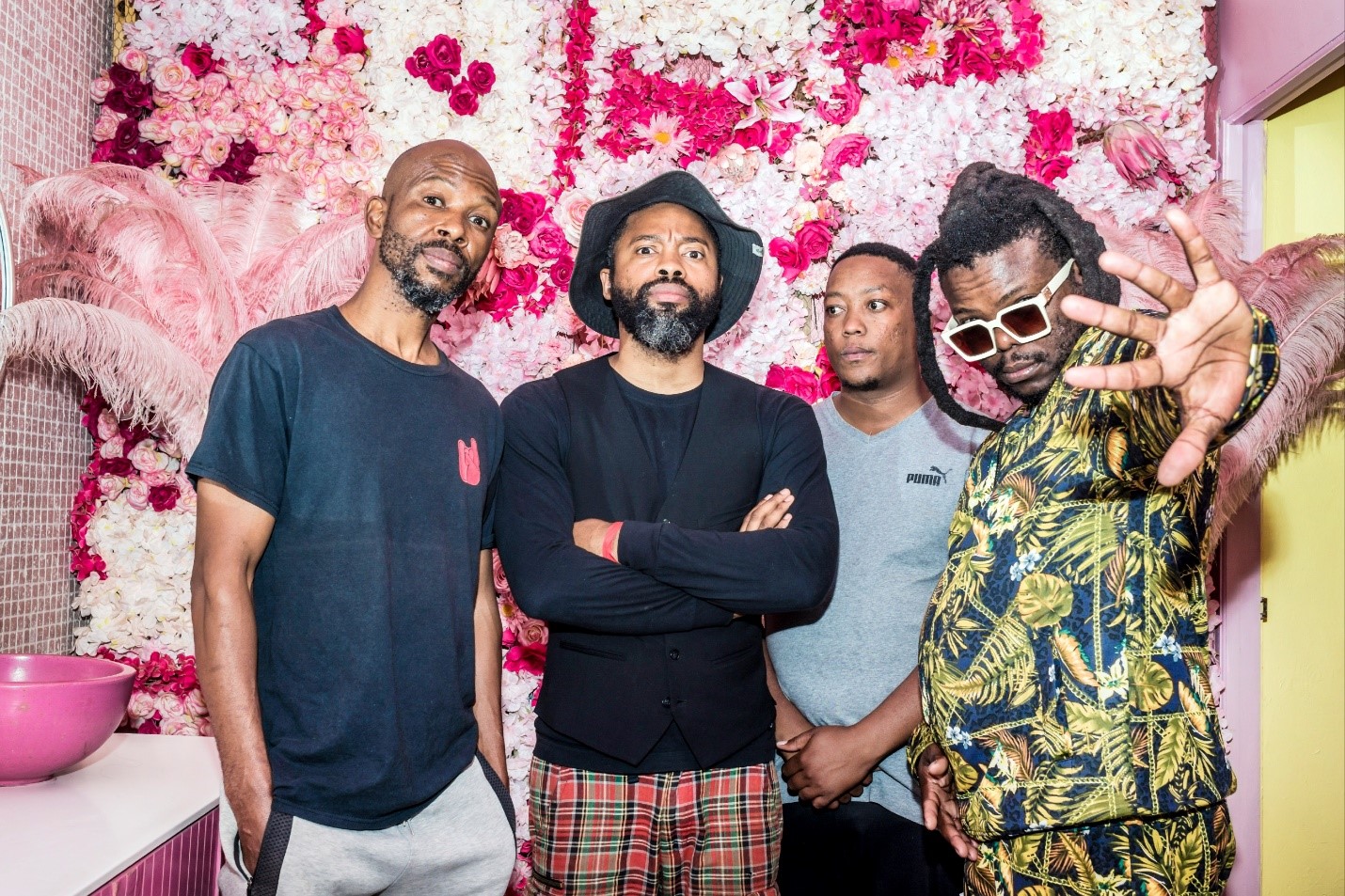 The Fête de la Musique (or World Music Day) is a popular and free music festival that has been taking place each year in France, internationally and was established in South Africa in 2010. In Johannesburg, it has become a great platform for both renowned and upcoming talents to make themselves known. Many local and international artists have taken part in the event throughout the years and contributed to its success, including Samthing Soweto, Msaki, Nakhane, Zoe Modiga, Blk Jks, Urban Village, BCUC, Berita, Baenz Oester and the Rainmakers and Bombshelter Beast.

The Fête de la Musique Joburg is brought to you by the French Institute of South Africa and the Alliance Française of Johannesburg, in partnership with Bassline Live and Newtown Junction. It is made possible by the continuous support of TOTAL South Africa to the arts.

THE BROTHER MOVES ON

Globally acclaimed The Brother Moves On is made up of Ayanda Zalekile on vox & bass, Simphiwe Tshabalala on vox & drums, Siyabonga Mthembu on vox & chants, Zelizwe Mthembu on vox and guitar, Mthunzi Mvubu on alto sax and flute, Muhammad Dawjee on tenor sax and Malcolm Jiyane on trombone.

The collective have recorded two new albums, a retrospective of the South African jazz tradition “Tolika Mtoliki”with Matsuli Records (out December 2021) featuring Bokani Dyer, Muhammad Dawjee and Mthunzi Mvubu, and their sophomore album “S/he Who Feeds You..” due out on Native Rebels Records(UK) in March 2022. The collective is part of the acclaimed “Indaba Is” compilation which came out on Brownswood Recordings in January 2021 having recorded a track with Thandi Ntuli entitled “Umthandazo Wamagenge”.

Milestones: 1. First solo exhibition in a commercial gallery - “Hlabelele” 24 September 2016: https://www.goodman-gallery.com/exhibitions/683 2. Six European tours, two SADC tours,one East Africa tour and two United Kingdom tours to date. 3. Represented South Africa in both the South African Season in France and the South African Season in the UK. 4. The band was invited to the Berlin Festspiele as part of a William Kentridge celebration where they presented their work in reaction to “Ubu and the Truth Commission” entitled “Ubu Never Loved Us”. 5. The band has opened for Saul Williams at Mimi Festival in Marseille, opened for Hugh Masekela and have been regulars in the London underground scene sharing stages with Yussef Kamaal, Shabaka Hutchings, and United Vibrations. 6. The collective has grabbed the attention of CNN, The Telegraph UK 1 and The Mail and Guardian 2 and the Guardian (UK) 3 and their debut album was the Bandcamp featured album thanks to the curatorship of Giles Petersen.

Standard Bank Young Artist for Jazz 2019 and 2019 fellow at UWC’s Centre for Humanities Research, Mlangeni honed in on his talents on some of the worlds most esteemed opera houses in Europe with the Cape Town Opera’s production of Porgy and Bess from 2009- 2014. As founding member of the critically acclaimed Amandla Freedom Ensemble (Bhekisizwe 2016 SAMA nominated Best Jazz Album and Born To Be Black: A Celebration Of The Conscious Soul). Mlangeni’s other outfit aptly named the Tune Recreation Committee (TRC) listed as New York Times’ Best Albums for 2017 and made their debut appearance at the 2017 Cape Town International Jazz Festival. The New York Times mentions, “this alliance of young South African musicians delves into the country’s syncretic cultural heritage — then ventures beyond. You hear Balkan folk, American funk, West African high life, South African free jazz. Most of all, you hear five bristling improvisers dancing together, modelling a kind of thoughtful communion”.

As recipient of 2016 Pro Helvetia Artist In Residence in Bern, Switzerland he collaborated with many esteemed musicians culminating in a SADC Album Tour Launch. Mlangeni has participated in a wide range programs namely OneBeat by Found Sound Nation in the US and the Take Five Residency Workshops presented by SERIOUS Music UK at the Bore Place Residency in Kent England 2016.Mlangeni has performed and collaborated with several distinguished jazz musicians such as both locally and abroad including but not limited to David Murray, Evan Parker, Feya Faku, Louis Moholo, Shabaka Hutchings (UK), Ganesh Geymeier (CH), Barney Rachabane, Hotsix Mabuse, Hugh Masekela, Khaya Mahlangu and Afrika Mkhize, to name a few. Mlangeni is curator of several other initiatives in Johannesburg and Cape Town namely t the Afrikan Freedom Principle and a host of other independent music ventures under his company MMMusic

Malehloka Hlalele, popularly known as Maleh, is back with a brand-new Afro Pop album titled ‘Tones of the Queen’ which celebrates the journey women take into finding alignment, realising their worth, and pursuing their destinies, against all odds. The album title also refers to the variety of musical sounds and influences by different genres, showcased throughout the project.

Maleh began her musical journey in the heart of the majestic mountain Kingdom of Lesotho where she was born and raised. The vocalist’s professional career took off in Bloemfontein where she joined Afro-Pop group Kaya, which released their debut album ‘Kunzima’, winning them the Metro FM best newcomer award in 2005. She later parted from the group to further her studies at a film college in Johannesburg. Upon graduating, Maleh later worked for several events production companies as a production coordinator, producing various major music festivals. Discovering the music industry from behind the scenes, so it was not long until the stage would call back the songstress. She returned as a solo artist in 2010. Between 2010 and 2011 Maleh featured on several hit collaborations including Dj Qness (‘Uzongilinda’ & ‘Time’), DJ Ganyani (‘Not so Far') and the international hit with DJ Kent, 'Falling'.

Maleh’s much anticipated 2011 debut album ‘Step Child’ was a twelve (12) track Neo Afro-Soul production earned her two nominations in the 2013 Metro FM Music Awards in the ‘Best African Pop’ and ‘Best Contemporary Jazz’ categories and at the the XIX South African Music Awards in 2013 she won The Best African Adult Album .Her follow-up album and first single ‘You Make My Heart Go’ was released in December 2014 it was nominated at the 2015 XXI South African Music Awards and won the award for the Best African Adult Album.

BLK JKS released their second LP “Abantu / Before Humans” on the 7th of May 2021 via Glitterbeat Records (Worldwide) & We Are Busy Bodies (North America).

The story of BLK JKS reads like a veritable rock’n’roll legend. For a couple of years around the end of the 00’s, the enigmatic South African rock quartet was the darling of the local and international underground scene. Apparently “discovered” by Diplo in SA, they went on to meet and befriend everyone from The Mars Volta to TV On The Radio, two bands they were often compared to. They jammed with The Roots, snapped pics Pharrell Williams and hung out with Lou Reed at the SXSW festival in Texas. They played double bills with Squarepusher at South Bank (UK) and Femi Kuti at the fabled Irving Plaza NYC. Recording an EP aptly named “Mystery” by chance at Jimi Hendrix’s iconic Electric Lady Studios. This and a Fader Magazine cover feature in March 2008 then led to the band signing with indie label Secretly Canadian in 2009. Their debut album “After Robots” went on to blow down the walls of rock'n'roll Jericho with its heady yet seamless mix of post-apocalyptic African funk rock, jazz, kwaito, folk, renegade dub, psych prog-rock, tv channel hopping, internet surfing, mbaqanga, soul and pretty much everything else in between. Rolling Stone Magazine championed the BLK JKS as “Africa’s best new band”. But just as quickly as they arrived on the international scene, BLK JKS disappeared….

The years of international touring had begun to take its toll. By 2011 the band were back in South Africa, a hiatus where each member pursued their individual creative muses was inevitable and necessary. Guitarist Mpumelelo Mcata directed and produced two feature length creative documentary films that twice premiered at The Berlinale. Drummer Tshepang Ramoba whom Billboard Magazine named Best Musician at SXSW ’09 became an ‘in-demand’ producer helping to launch and develop the signature sound of rising stars like Moonchild Sanelly. Bassist Molefi Makananise became a farmer and music-centric pedagogue, and front man Lindani Buthelezi left the band to pursue his own musical direction. When the bands contract with Secretly Canadian ended in 2014 fans and critics alike doubted whether BLK JKS would ever record again.

Yet while they flew largely under the mainstream media radar, for the next five years the three remaining members continued to work together. Now, it’s the year 2021. We are here in the future, where BLK JKS finally re-enter the musical fray with their long-awaited new album “Abantu / Before Humans”. They see it as a prequel to “After Robots”. “Abantu” is a surreal journey of an album, beaming with laser-like vision and power… that in parts possesses an almost hauntingly vulnerable beauty.

About the Embassy of France in South Africa

The Embassy of France in South Africa serves as the main representative office of the French Republic, headed by Ambassador Aurélien Lechevallier. The Embassy works to build and strengthen cooperation and collaboration between South Africa and France in various fields, including politics, education, culture and business. This is done through close relations not only with the South African government, but also local businesses, non-governmental organisations, the media and educational institutions. Embassy staff constantly monitors and analyses local developments and is responsible for looking after the interests of French citizens in South Africa.

About the French Institute in South Africa (IFAS): Over the 20 past years, IFAS has worked with multiple public and private partners in South Africa and in more than 30 African countries, prioritising the development of skills and ecosystems for innovation in the cultural and creative industries sector. With each project, IFAS develops unique collaborations with the shared goal of making the exchanges between the countries within creative industries more rewarding, complementary, dynamic, innovative, creative and ambitious. The Institute facilitates and implements these collaborations with key players of the French creative industries in training, innovation, business development and public policies to design programmes with a win-win approach.