Isifebe asilele sitshele kwisende le’engcinizelo (Impotent), marks another chapter in artist Ayanda Mabulu’s personal mandate to depict the political situation in the country as it is. The man has always maintained that his is not a preoccupation with the artistic sensibilities espoused by galleries which often render artists’ works “meaningless” in a bid to fit into the “white walls of those spaces”. For Mabulu, the matter is not personal against the president of the republic, but he cannot sit aside and mask what is happening by “being metaphorical” in the approach to his work. The two works are a response to allegations of state capture by the Gupta Family and the constitutional court outcome regarding the Nkandla upgrades where it was determined that President JG Zuma was found to have failed to uphold, defend and respect the constitution.

“Why must I hide the truth when it is as blatant as the sun,” Mabulu says in response to a question about his use of sexual scenarios in depicting the political leadership of the country.

The artworks form part of the Post Its exhibition currently doing duty at Constitutional Hill. The exhibition features artists who “contest and trouble the notion that the South African present is a radical break with the past. They disrupt conventional narratives that differentiate the past from present and future, artists that grapple with the lingering effects, politics and aesthetics of the past within the present day, and both engage the euphoria of African political independence, and lament the stubborn persistence of ‘apartheid’ and ‘colonialism’ within the declared postcolonial and post-apartheid 21st century”.

Co-curator of the exhibition, Asanda Madosi regards Mabulu’s work as an important part of the realities of a post state and believes that the artist has captured the current state of affairs in a manner that will have a historically lasting impact on the times that we live in. 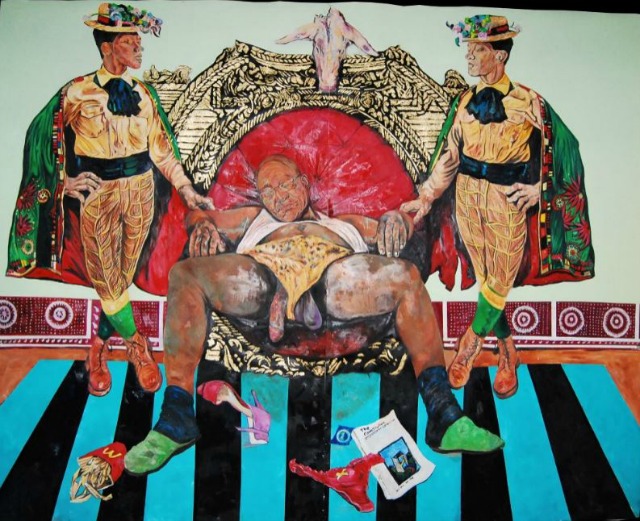 We trusted these people with our hearts and voted them into power and it is sad that post-1994 nothing has changed. In Pornography of Power, we used hyenas to depict the masters who are pulling the strings; but this time it was important to be even clearer if that was possible and put it out there blatantly that unfortunately the Gupta family is at the centre of state capture and that Zuma is the person who is going out of his way to please them. Our country’s well-being is deteriorating and the work is just presenting our leadership in its natural form; naked for all to see.

There is a lack of accountability on the part of the powers that be.

The work is really aimed at the masters who are controlling our leader. And the Guptas are one of those masters. It’s not personal because it goes beyond the president.

For me it is about the abuse of the office; abuse of power. We can’t be complacent about it. The paintings depict what is in the news every day. The painting is nothing new. Before talk of state capture; there was Guptagate which saw the family landing at Waterkloof for a wedding. So there is nothing new here.

The show asks what is happening in a post society, and the artists have interpreted this in their own way. Some people have had a ball since post 94; and for some the situation has not changed since apartheid. So the show and the artists question what it all means; what does a post anything society mean for all concerned. So we have to question…(Mabulu jumps in).

No man. How long must artists question things? The problems are out there for all to see. It is blatant. We are tired of questioning things when the answers are there and are as clear as daylight. The painting with a member of the Gupta family is very clear. As artists we end up doing meaningless work because we are on a quest to “question” when the truth is there to see. I think it is time that artists started providing answers instead of questioning all the time.

Yes. These are the conversations that the exhibition is addressing. We went through something atrocious as a country. What are the current effects of that? What does it mean for black people? Employment based migration still affects our families. There is this interaction with whiteness for us as the economic underclass in corporate spaces which results in our beings and languages suffering. Our identity is put into question everyday due to this duality of our existence as black people.

We need to be more radical. We need to forge ahead towards a particular path. We know what must be done. As a country we are inside this plane that is going to crash as the painting shows. We can’t afford to sit around and do nothing.

*There will be a walkabout with the artists featured at the exhibition at Constitution Hill on Wednesday July 13, 2016 at 13H00.