At first glance, Days of Cannibalism is a documentary which cautions the tensions between Basotho and Chinese immigrants in Lesotho.

“We would like the Chinese to come talk to us” urges a radio host from Lesotho’s Mojodi FM.

The host appeals to greater unity between Basotho and the Chinese, urging for dialogue and cultural exchange. However, this is not possible. These immigrants have resolved only to exploit.

“There seem to be other nations and cultures coming into our country and mixing with us,” the radio host states. “But they haven’t assimilated to our way of life.”

This is a common and simple story. However, the nuance of the documentary is in its underlying message. Subtitled “Pioneers, Cows and Capital”, the film is commentary on racial capitalism. It posits that the relationship between the Chinese pioneers and the local Basotho is inherently exploitative and serves specifically to enrich the Chinese, at the expense of Basotho.

In one scene, these Chinese pioneers talk about keeping wealth “in the family”. By this, they mean keeping wealth among fellow Chinese, excluding Basotho. Their agenda is clear. It is revealed that they migrate to Lesotho specifically to attain its economic opportunities. In revealing this, the documentary comments that pioneering is equivalent to racial exploitation.

Still, the documentary does not want us to detest these Chinese pioneers. It only wants us to understand that racial capitalism is a serious problem with consequences for the people who are subjected to it.

The Capitalist Owns the Cow

In the past, it is explained that the communities of Lesotho would raise cattle together. The documentary states there was a culture of cooperation and sharing.

Now, cattle belong to businesspeople who are often wealthier Chinese immigrants. As cattle is a representation of wealth, Basotho are poor. They also do not own local stores and struggle to collect money to buy basic food necessities. The documentary explains that the immigrants arrive with great wealth and capacity which many explain how they came about to become store owners.

The shop counter becomes a vertical barrier between the customer and the store owner. We observe many Basotho struggle to bring enough money to pay the cashier. On the other end, the cashier has much money and continues to collect more from the people who have so little. The consumer buys the food but the capitalist eats.

The Chinese shop owner would have no wealth without their customers, who are exclusively Basotho. In fact, the documentary states that the Chinese regularly outbid Basotho for more cattle. This creates a system where Basotho struggle to own cattle and are forced to become consumers.

The wealth of the shop owners continues to increase while Basotho continue to struggle. This inevitably becomes a vicious cycle because the Chinese pioneers have even more wealth to acquire more cattle. Their success is premised on creating conditions of inequality.

Given Basotho do not have enough money and do not own sufficient cattle, they are forced to become labourers. The money they earn, however, goes right back to the wealthy who they buy their food from. It is an inevitable transfer of capital to the “pioneers”. At one point, the businesspeople are talking about expanding their warehouse. Strikingly, they conclude that Basotho will be the ones to build it.

In one scene, we see these shop owners enjoying large servings of beef, while Basotho struggle to afford food. Their hunger contrasts the immensity of food on display in the store. On the other hand, the capitalist eats because the capitalist owns the cow.

The documentary also explains that the labour which produces the cow is performed by Basotho. They shepherd the cattle in the field, inject necessary fluids (at great danger), slaughter the cow in the abattoir, and they cut up and package its parts. Always, Basotho are the labourers. The capitalist eats but the poor prepare the food. 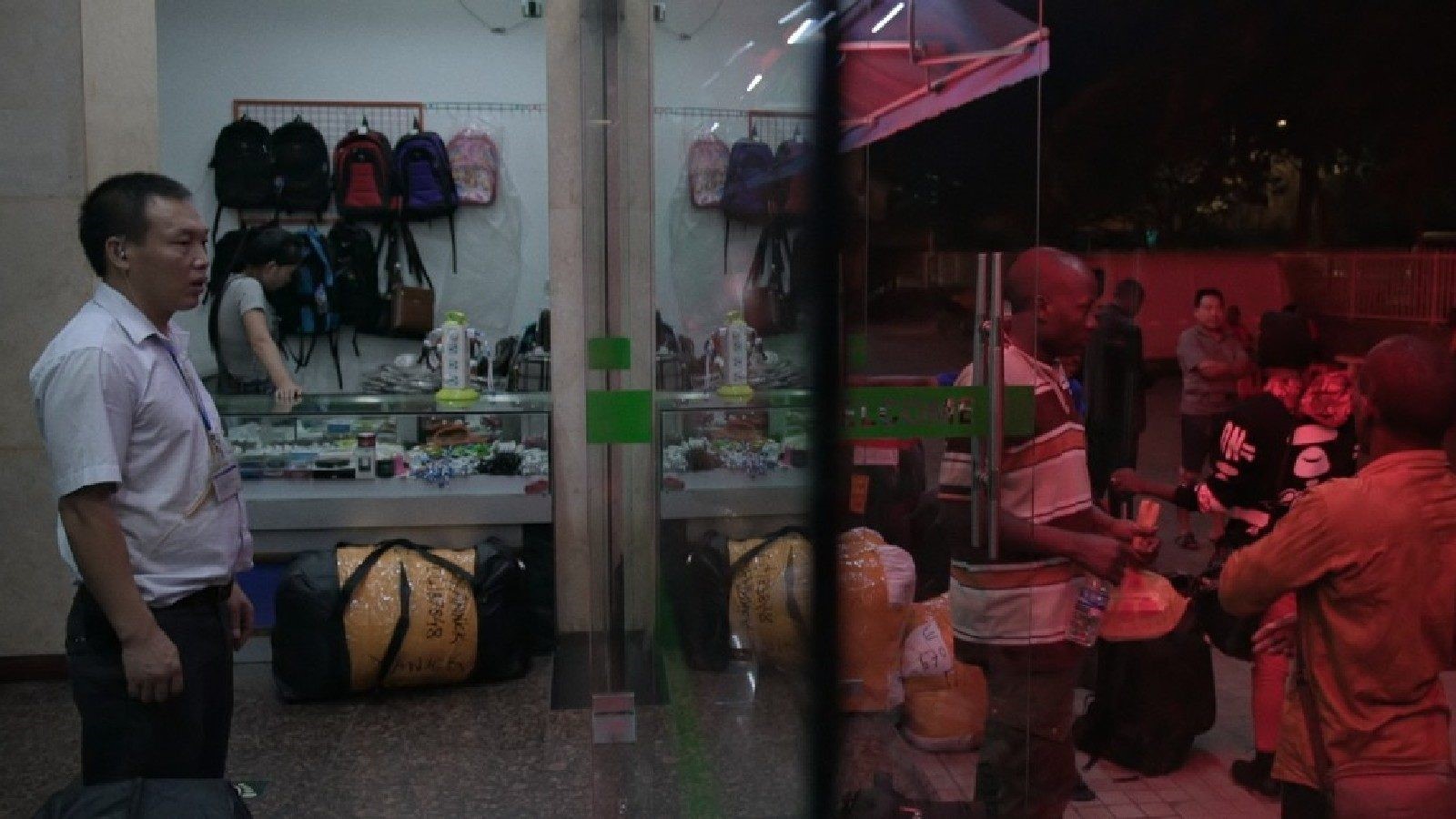 The documentary reveals exactly how racial capitalism functions. Black people are shut out from owning wealth and so struggle to sustain their lives. They are forced, therefore, to become workers. They are paid very little money. They starve and so they buy food from the very people that pay them little. All the while, the people that own capital know all too well exactly what they are doing. It is for this reason that they are called ironically (or intentionally), pioneers.

For the labourer and the poor, there is only the option of cannibalism: to compete among each other to eat. Survival requires a selfish determination to care for one’s own interests and take as much of the little available resources that are not enough for all.

Still, suffering is inevitable. If they do not work, they starve. Else, they commit crime and are punished. If they work, they are exploited. All their options will result in a failure to climb. There are no routes for their social mobility. There is only the continuous falling which keeps them below.

Days of Cannibalism attempts to understand the falling of Black people in Lesotho, set mostly in the town of Thabe Tseka and Sehonghong Village. The documentary explains how poverty was introduced as a result of racial capitalism and expresses the loss of their way of life with no hope of recovery. Most importantly, it is the cannibalism of racial capitalism. Black people compete for jobs, steal from and enact violence upon each other, and can only eat at the expense of the other starving. This is the horror explored by the film.

Two Faces of the Same Suffering

Blackness takes on two presentations in the documentary. There are the people who tend the cattle and the land. These are owned by the wealthy businesspeople. Then there are the jobless thieves who steal cattle to feed their families. They are jobless because there simply is no employment.

Racial capitalism does not need all Black people to work. In fact, it requires that there always be a large supply of unemployed which pressures the people who are employed to accept low wages and poor working conditions else they will be replaced.

In Days of Capitalism, we hear directly from the Black workers that they are scared of their employers. In one scene, a Mosotho sings, “The Chinese are abusing us. We are suffering in their factories”.

We also hear directly from the thieves, who explain their sole motivation for theft was their inability to find work.

“There is massive unemployment in Lesotho. This is what forced me to cross the border and steal those cows. It was to keep my children alive.”

A scene shows a group robbing a Chinese store at gunpoint. But, these efforts are rarely rewarding. A duo of Basotho in another scene are sentenced to a decade in prison for stealing cattle. They stole cattle from fellow Black people. They were sentenced by a Black judge. This is a greater form of cannibalism which the documentary explores. Black people enact violence and justice on each other.

These thieves are, in fact, just a different face of the same suffering. After all, the documentary reveals that the cattle are stolen to be sold, especially to the wealthy Chinese businesspeople. So crime also involves itself in transferring wealth to the “pioneers”. The thief is, in the end, a labourer. They are often caught and punished, but the wealthy who create the demand for that crime are unscathed.

Is There a Way Out?

On Mojodi FM, a radio presenter argues for a return to the cultural customs of cooperation. In earlier scenes, we see the Horse Riders of Mashai who ride joyously into glory. Basotho culture has not entirely corroded.

They must escape capitalism altogether if they are to liberate themselves from its suffering. For some voices in the documentary, there needs to be a reestablishment of their community. It’s not clear how this vision can be reconciled with the exploitative ideals of the pioneers. Racial capitalism has entrenched itself so much into Basotho society that the cannibalism might never end. It remains unclear how to stop Black people from eating each other.