Two intellectual tsotsis converged upon a gallery. The first, writer and black arts auteur, Percy Mabandu, is a sjambok wielding Ga-Rankuwa jazz man prone to calling on his internal thesaurus in speech and within the written word. The other, Limpopo beanpole, surrealist painter, existential theorist and hipster ex-convict, Blessing Ngobeni, sat down with Mabandu to spar about the intricacies of his artworks. With a glass of white in hand, Mabandu adjusted his hat and tipped it to Ngobeni who reciprocated the gesture, before starting the discussion off in Xitsonga which flew over the heads of Gallery MOMO’s black artistic class. 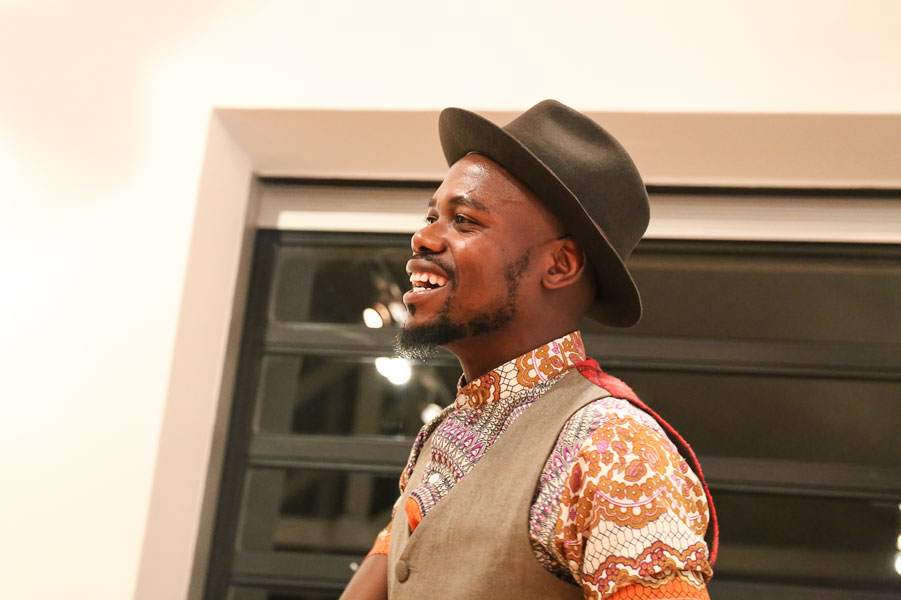 Mabandu’s introductory passage painted Ngobeni as a “vernacular creative intellectual that interacts with what it means to be alive now, with a very serious visual language”. Indeed, Ngobeni’s narrative has been well documented but the evening probed deeper into the process that informs some of the work and how it had its genesis in portraiture when he was a resident at Sun City during his teenage years.

Ngobeni has always been one to interact with his surroundings whether it was when he was living on the streets, or fending for himself in the wilderness as a child. His has been a journey that responded to the immediate environment and he continues to do that in his work. The politically inclined artwork combines his current mental dispensation while harking back to his struggles that still haunt him through his dreams. His face is always etched with a permanent smile, and this sunny disposition, despite all the hardship, prompted Mabandu to call upon Stanley Crouch to aptly describe the path that Ngobeni has travelled. 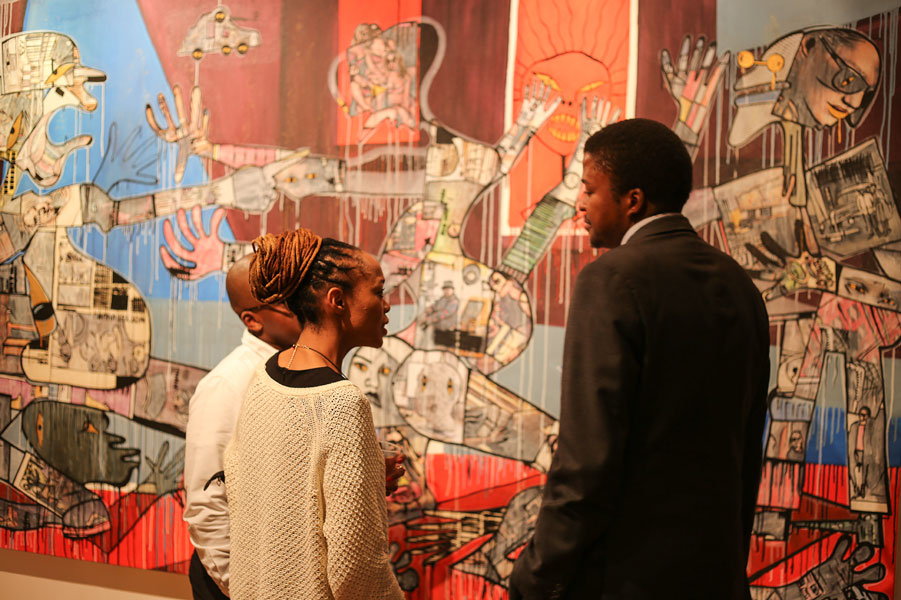 “Blessing has made his journey look easy. I have no doubt it was not easy but he made it look easy.”

It certainly does appear that way.

“I obtained my degree in the streets of the city,” Ngobeni starts.

“I was influenced by what I saw around me when I was living in the streets of the city. Those experiences along with experiences of my childhood and the current situation all connect to produce my work.”

Mabandu then raised the subject around the deformed images than accompanies most of Ngobeni ‘s work.

“The deformed images in my work are due to all the things that have wounded me in my life and some of them come to me in my dreams,” Ngobeni explains.

“It is hard for me to focus on what is regarded as beauty. When I wake up in the morning and go to work, I simply project my dreams onto the canvass. It just pours out and sometimes I am not even aware of what is happening when I am painting. The images are sensitive and ugly, but it is the state of things that we are surrounded with.”

Ngobeni’s work took a political turn after his first solo exhibition titled After Earth at Gallery MOMO. The exhibition was a success and set him up for a very successful career which is devoid of portraits these days.

“Politics jumps into my work because it affects me and all of us so I cannot avoid it,” Ngobeni says.

“We are all politicians in our own way. People on the street are affected by politics, as much as any of us. The wealth of this country does not reach those who are struggling, because of what I refer to as ‘the bellies of freedom,’ because we think about our stomachs and forget that there are people in need on the streets.”

Just as Mabandu was about to wrap up proceedings, Ngobeni had a parting word regarding the making of a masterpiece.

“When two cars collide in an accident, that moment can change your life forever,” Ngobeni teaches.

“That collision is what art is all about. It is not planned; it must happen suddenly like a crash. The explosion of the mind combined with external elements like music, life, challenges, family, and politics etc. All these elements come together in a crash to create art. These are the makings of a masterpiece.”