It’s fucking hot. The shack comprises an embroidered concoction of bodily sweat, weed and sex. Zito is all smiles wearing an afterglow stemming from a sexual encounter that concluded just 10 minutes before my arrival. As per the norm, he lit a joint to calm himself down; hence the spot still reeks like a scene from a Tijuana brothel. The body odour is courtesy of the unwavering heat which seems to have deposited itself just above Zito’s shack.

“I can feel myself getting darker,” Zito says about his decision to stay in his overextended shack rather than venture outside. 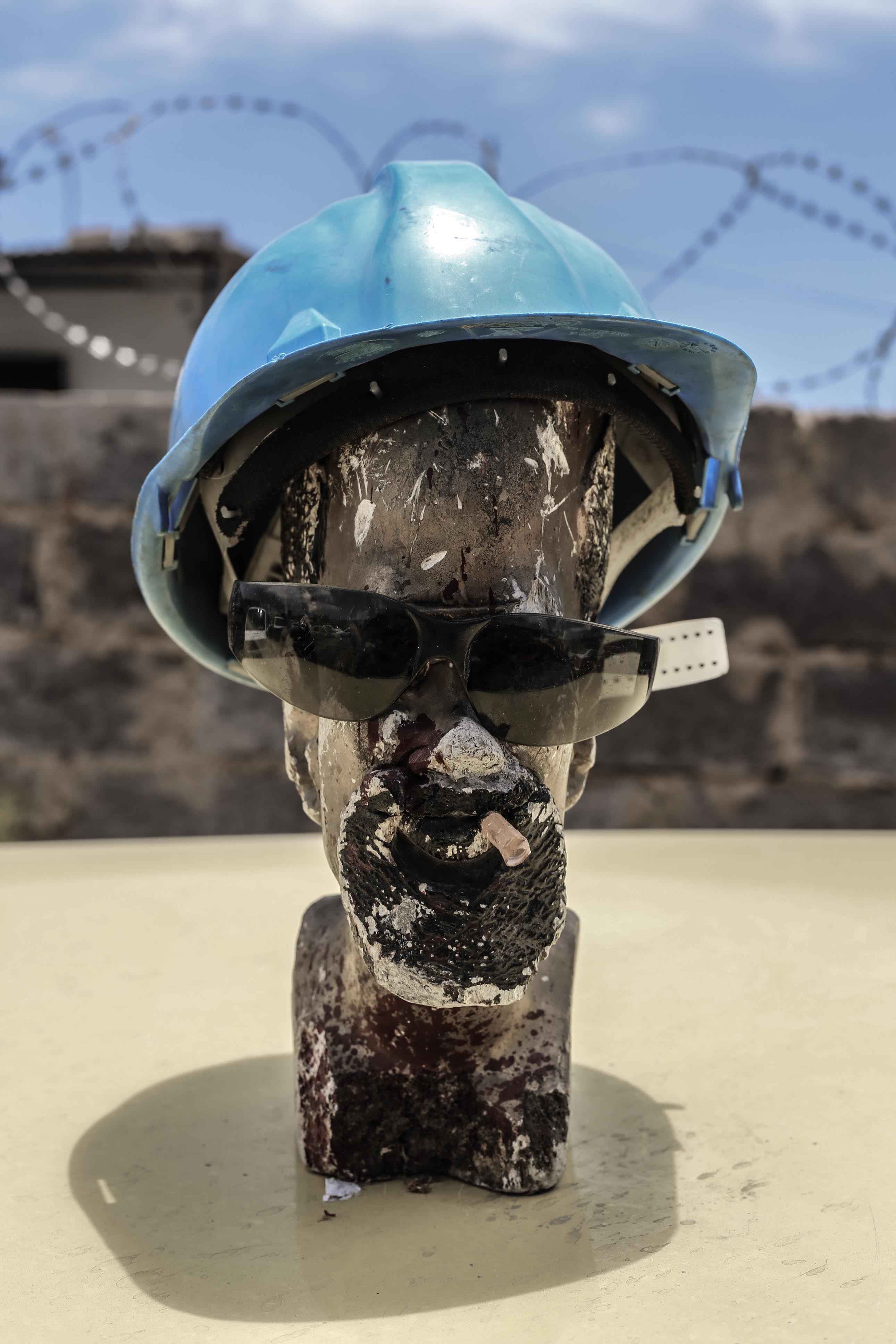 How Zito can get any darker than he already is, is a question for the ancestors. But we indulge him. Maybe it’s the weed. Luckily he gets a call and has to finish a paint job on a taxi that the owner needs post haste.

On the feet of Zito’s home is a scrap yard somewhere in Soweto. Scrap metal, discarded cars and all forms of brokenness greet the amorous panel beater every morning when he wakes up. There isn’t much of a view as his dwelling is surrounded by large concrete slabs that enclose his spot and the scrap yard.

His neighbour Tony, a mechanic, looks curiously at Culture Review photographer, Siphosihle Mkhwanazi, who is snapping away merrily at the disjointed setting where folks bring their possessions to be revived. Zito still wears a post coital glow and is now bragging to Tony about getting some. Tony looks his braggart of a neighbour up and down and offers a wry smile before returning to observe Mkhwanazi’s activity.

Things almost come to a head when the lens man trains his camera on Tony who responds by threatening him with grievous bodily harm. Zito interjects and the pair conducts an exchange in Portuguese which results in Tony disappearing underneath a car which looks all but beyond repair. 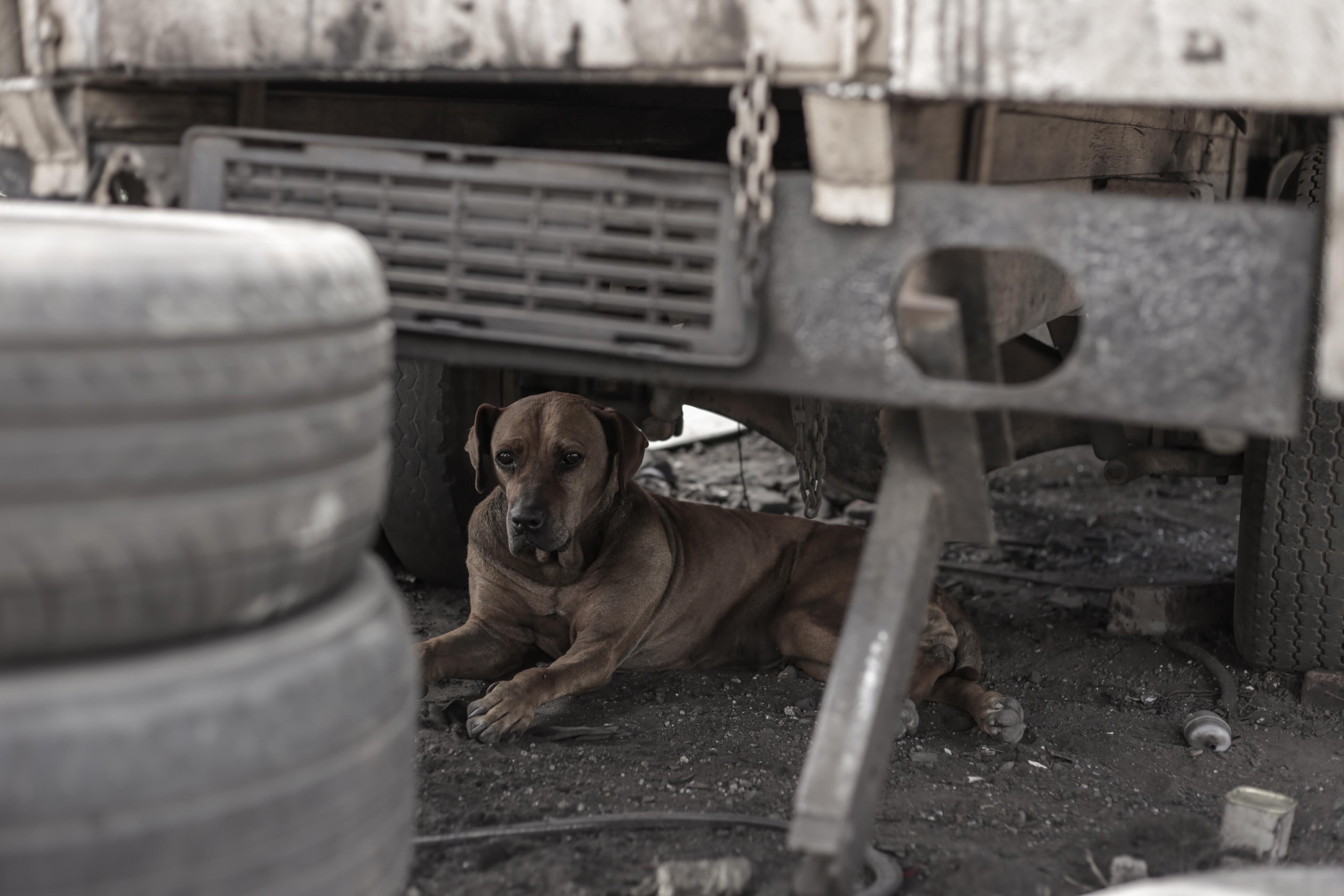 Both Tony and Zito come from Mozambique and they have not been home in over a year. Sibongiseni, a burly imposing figure approaches our party. He is from Swaziland and runs the operation. He too did not go home this December. Sibongiseni is decked in oily mechanic overalls, but I have yet to see him touch a car the whole day beyond opening the bonnet. He has two local assistants in Sipho and Mavusana whom he doles out directives to with regard to the remedies the respective vehicles require.

It is a few days after Christmas and the scrap yard crew carry on wilfully indifferent to the so called festive season that is in full swing beyond their walls. “There wasn’t any money to go home this year,” Zito proclaims in Xitsonga.

In an unexpected twist to our prior agreement, Zito has also changed his mind about being photographed following Tony’s lead and decidedly Sibongiseni who also refuses to have his likeness captured.

“Christmas around here is just another day makwavo,” Zito continues.

“There are no bonuses here. We still drink the same Castle Lager we drink everyday and we still wake up to the same bread and butter with tea breakfast even in this heat. Life only changes for people beyond these gates in December.”

The streets that flank the scrap yard are lined with residential houses with well-trimmed gardens and folks enjoying festive libations under the protection of shady trees.

Sibongiseni’s festive season was a bit more colourful as his nephew took him to a strip club wherein he slept with a white woman for the first time. He recalls the night with grave detail, but expresses disappointment that this encounter was not as mind blowing as he had imagined. But this little revelation will not stop him from bragging about it.

Tony emerges from underneath the car and enters the fray in a better mood, no doubt buoyed by all the sex talk involving strippers over quarts of beers that have since arrived courtesy of a happy customer. Zito tells me that his lady lives in similar conditions in Diepsloot and is unemployed after losing her job as a domestic worker after her employers relocated to Mpumalanga. She is from Zimbabwe.

Diepsloot is some distance from Soweto which can make relations between Zito and his lady quite cumbersome due to taxi fare costs.

“It is not easy to find women around here,” Zito concedes. 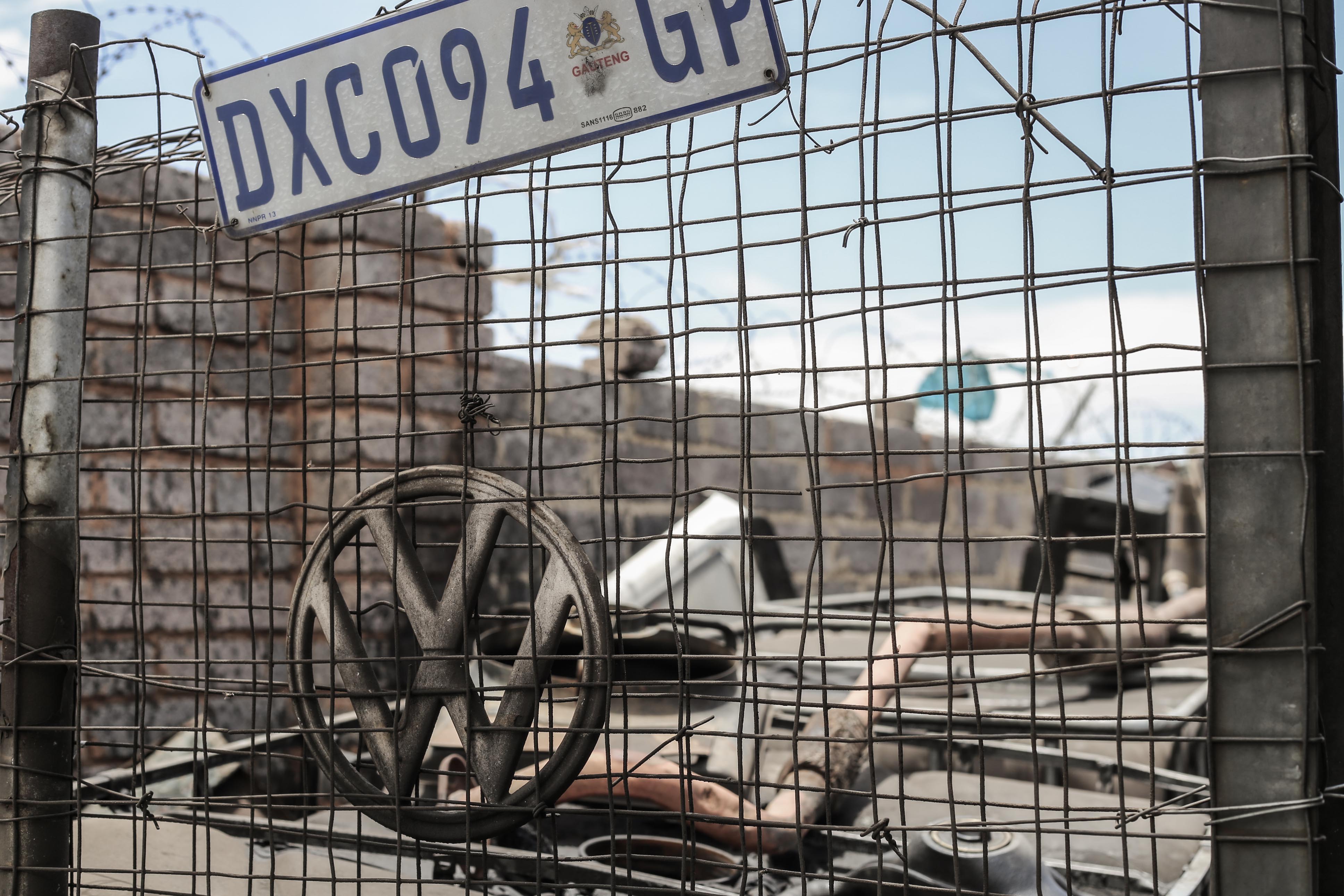 On a normal day they work until the sun retreats into the darkness, but today spirits are high and the beers get replenished after the ones gifted to them by a client are finished.

I return to the yard a couple of days after New Year’s Day, and find Zito and Tony taking a breather under a makeshift garage. He tells me that New Year’s Eve came and went without any fanfare, pretty much like Christmas. Sibongiseni however is not around as he managed to wangle some bucks to go home just before New Year’s Eve.

“We came into the New Year nicely without any problems.” 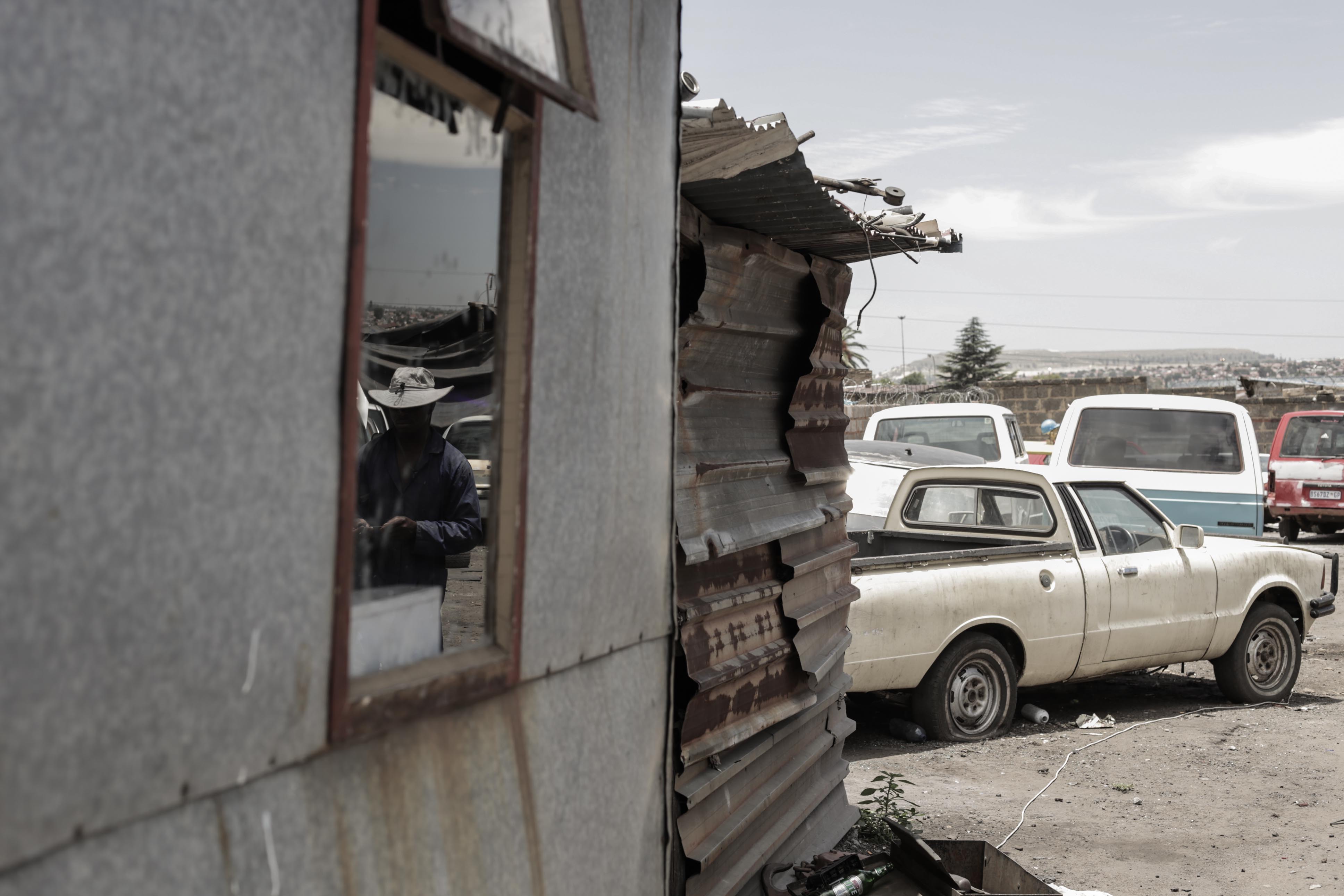 “Like I said, it is like any other day, but this time we were drinking Castle Lite,” he chimes in with a chuckle.

Tony disappears to wash up because he is going to visit a lady companion later.

I make another attempt to persuade Zito to pose for a photograph but he remains resolute.

“You want to put us in the papers and tell people that we came here to chow South African money and that we don’t want to go home,” he protests with a sly chuckle.

“But I must go home soon,” he considers.

“Maybe by April I would have saved enough to go home with some money for the family. The problem with saving sometimes is that the money comes in and goes out immediately. Next year I will definitely spend the holidays at home. You have to be with family. It is not pleasant being here all year round, especially during this time of the year.”

Tony comes out laced to the nines in his Sunday best. Brown corduroy pants, a washed out blue long sleeved shirt and black shiny shoes that look like they have a three month lifespan remaining in them. He is all smiles. But before he leaves, a car saunters into the yard helmed by a customer in desperate need to get it fixed immediately due to “pressing” engagements later. Tony tells him to come back the next day, but the client is insistent, pleading with the mechanic. He informs Tony that he will pay him more than his usual rate. Tony lowers his head to the ground and pauses for a moment in frustration.

“As you can see, I am clean, I have just bathed and ready to go,” Tony lambasts in an interesting Zulu accent.

“I understand, but please I beg of you man,” the customer retorts.

“Eish you people don’t want us to have a life ne,” Tony says. 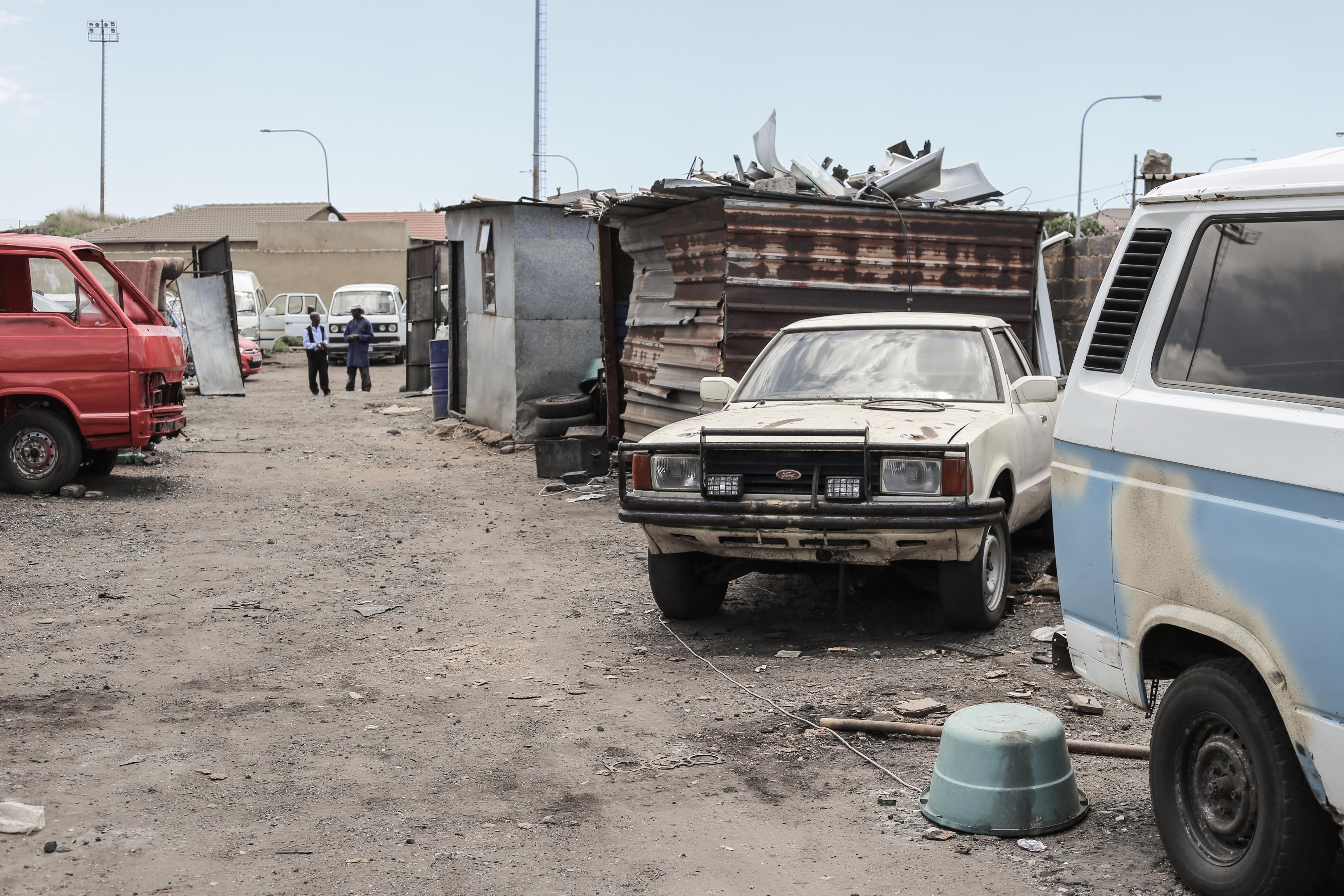 The customer laughs at Tony’s painful joke. Tony retreats into his shack and comes out in his work overalls and begins work on the car. Zito abandons his own duties and offers to assist his friend and countryman to complete the job quickly.