The National Arts Festival, held annually in Makhanda (formerly Grahamstown) dates back all the way to 1974. It is a celebration of various forms of art, including: theatre performances, visual art showcases, poetry readings and performances, book launches and fairs, and the much-aattended musical performances. South Africa has a particularly rich jazz history, and one will never be starved of the beautiful sounds this genre has to offer, when attending Makhanda’s (and,some would argue, Mzansi’s) premier arts festival.

The Covid-19 pandemic had put the festival on hold in 2020 and 2021, but this year the organisers have confirmed that the festival will be happening live and direct. Judging from the programme, this year’s offering promises to be a spectacular one. It is, without a doubt, important that this festival goes on and continues to grow. The Covid pandemic dealt a debilitating blow to the social and economic security of many, and artists faced amongst the worst of the effects. The resumption of the festival will not only lift morale in the sector, but indeed energise the various artists in their different genres and forms. Ranging from both the prominent and the peculiar, arts practitioners get to showcase and share the many things they have been working on, while also making a buck or two; patching here and there. Of course, the festival is a cultural feast for the various audiences.

From Irving Berlin’s When the Midnight Choo Choo Leaves for Alabama (1912), to Gladys Knight and the Pips’ Midnight Train to Georgia (1973), Buddy Guy’s Midnight Train (1999), and Tuks Senganga’s Ticket to Jozi, taking a midnight train has typically symbolised leaving and never looking back. Leaving an old place, self, love… and beginning anew in the morning, when the train arrives at its destination. Midnight Train to Makhanda is the name of the upcoming show headlined by Makhafula Vilakazi. As its name suggests, taking a midnight train to Makhanda represents the exhilaration of leaving behind, albeit temporarily, the suffering and loss faced by many artists since the advent of the Covid pandemic, and the economic and social devastation this has brought with it. Considering that the festival is going to be back after two long years, the sense of new beginnings that getting on board this train conjures feelings of joy, newness, abundance and excitement. In many ways, it represents opportunities for starting over and leaving the suffering of the last two years behind; arriving in Makhanda in the morning of what promises to be a new dawn (not Ramaphosa’s one!). 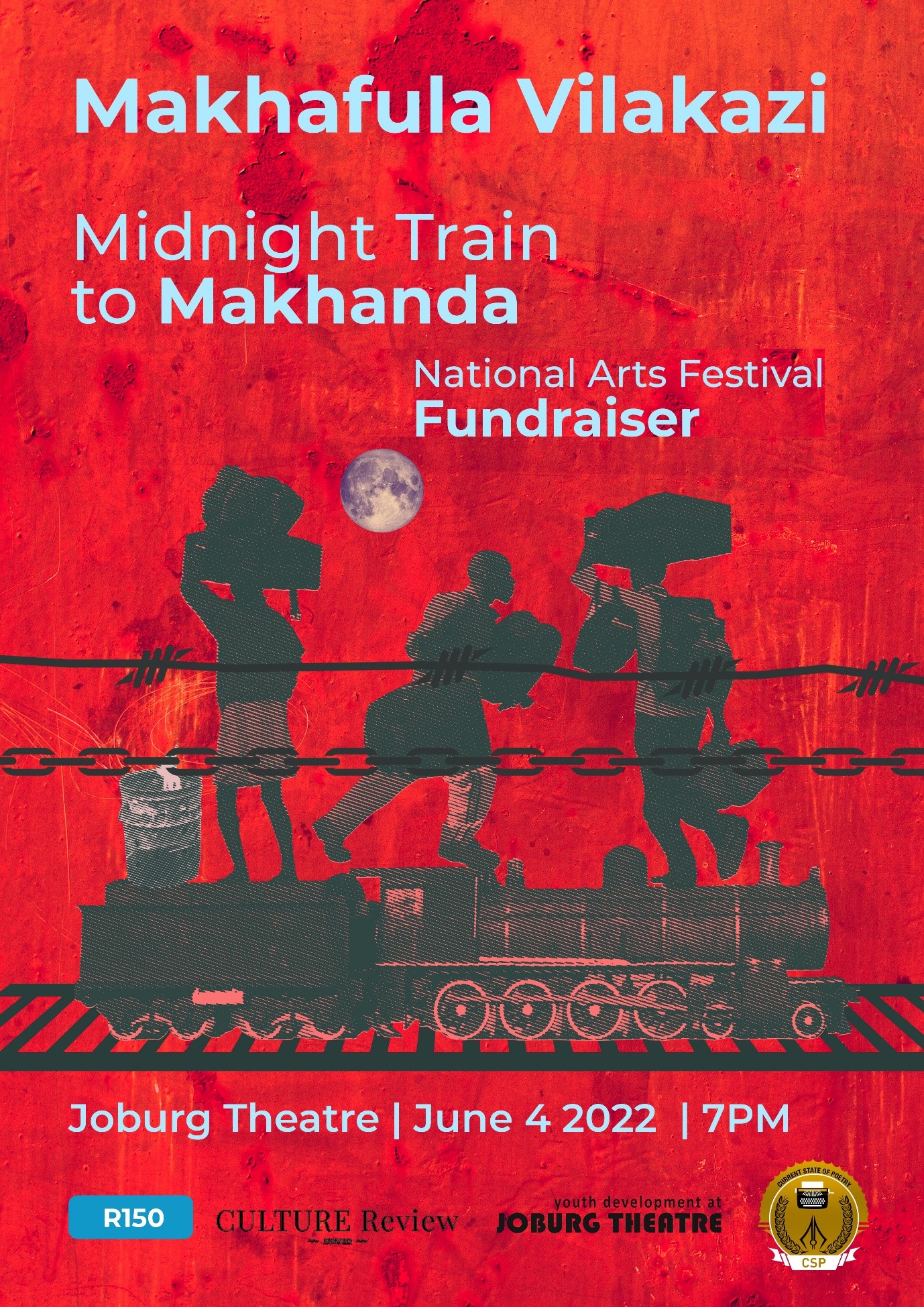 The poet Makhafula Vilakazi, who delivers densely lyrical critiques of the enduringly anti-Black status quo, and the lack of significant change for Black people still interred in the desperate, tragic dance of what life in the township continues to look like. In his trademark brutally honest, strikingly visceral poetic delivery, Makhafula chronicles the (structural and institutional) social and political impediments that are designed to ensure Black folk remain in an interminably developing state but are never fully developed. The poet highlights the endless vicious cycles of debt and destitution, repeating generational nightmares that are never meant to be broken… in a world designed to privilege white heteronormative beings. He also delves into the all-too-familiar odds-defying love between Black lovers and Black families, a bitter-sweet kind of love, exploring the prevalence of abuse within these relations and relationships; and the varying complexities that define Black intimate heterosexual love. The no-holds-barred bard does not pretend to give solutions for overcoming these struggles, but shines an uncompromising spotlight on them nonetheless. In this, Makhafula is both artist and philosopher, archivist and activist, poet and prophet…

If you are unable to make it to the Makhanda festival, and yet would still like to experience a touch of the brilliance that the festival promises to offer and deliver, you are implored to make your way through to the Jo’burg Theatre on the 4th of June for Midnight Train to Makhanda featuring the man, the moment, the poet, Makhafula Vilakazi. Owing to the devastation wrought by the pandemic, the show will also serve as a fundraiser for the trip to the National Arts Festival, and promises to be one for the books. For those fortunate enough to attend the festival, be reminded that it will take place between Thursday 23 June 2022 – Sunday 3 July 2022.

1
Midnight Train to Makhanda – Makhafula Vilakazi
2
From Your Lips To My Soul: A Soulful Instrumental Connection
3
URIZE! and UMDALI @ Joburg Theatre: A Live Musical Assemblage