It has been a little over a month since this here, fine publication, released unto the world, Ayanda Mabulu’s seminal art work Pornography Of Power, starring President Jacob Zuma. A media storm that extended well beyond these borders ensued as it sought to decode Mabulu and the reasoning behind his painting.

It has been an eventful month that saw the artist hop onto media platform upon platform to give his side of the story and what he believes to be the current situation in South Africa for the majority of its citizenry. For his sins, he was met with death threats, went into hiding, witnessed a march against him by the ANC’s Woman’s League and promised a beat down by the president’s son, Edward Zuma.

But rather peculiarly, a mysterious Frenchman happened upon Mabulu’s premises of creation with a briefcase full of cash offering to take the artwork of Mabulu’s hands. The briefcase was purported to contain some R80, 000 in cash. The artist refused and kindly escorted the gentleman out of his space.

Back in 2012 his “controversial” Umshini Wam (Weapon of Mass Destruction), was sold to a mysterious buyer whose details and credentials were not traceable. The painting was collected by a guy whom Mabulu said looked like “he lived on the street”.

He is adamant that he does not want people close to the ANC buying Pornography Of Power because, “they will buy it just to burn it”. None the less, he has been busy producing new works that continue to speak to the “material conditions of black people in this country”. Despite all he has endured during the past month, Mabulu remains resolute in creating artwork that “addresses those in power candidly”.

Born in 1981 in Zwelitsha Zone 10, King William’s Town, Mabulu’s house was just ten to fifteen minutes away from where Steve Biko was born.

“You can imagine what sort of blood and ideologies that ran through that place through siblings and those who inherited what Steve Biko was about,” Mabulu recalls.

“I happened to be one of those who were familiarised with the man’s work and teachings from an early age. You can see from where I come from what sort of ideology I posses.”

This is where the romance about growing up in Zwelitsha ends for Mabulu as his expression changes from jovial to tense when considering his childhood.

“Growing up in Zwelitsha was not a nice experience,” Mabulu says.

“Although I am a proud to be from that area, it was not an easy place to grow up in because of the political instability in the eighties. The townships were burning and our big brothers used to set government officials’ cars on fire. On some weekends we enjoyed hearing the sound of drums and trumpets from a funeral of a sell out policeman.

“If I remember correctly, there was a policeman called Mamba, who was fighting against the revolutionaries in our township. One day he was confronted at his house by people who wanted to deal with this apartheid collaborator. I remember him standing in front of his door, wearing black shorts, holding a grenade and a Kalashnikov threatening people by saying that the ‘first person to walk into my house will catch a bullet’. We were there at the back of the army as little kids. His house burnt down and he vanished. But I must admit that this was a scary experience. It was not an ideal childhood, because sometimes we would be at assembly with our little eyes closed during prayer and then next thing we would be hit with teargas.”

Mabulu’s first drawing was political as he was mired in the struggle in Bisho as a young child who followed older members of his community around. Their mission sought to remove Oupa Gqozo who was the Brigadier General of the Ciskei in the early 90s.

“My first drawing was of Gqozo and it was his face attached to a body of a dog,” Mabulu remembers. 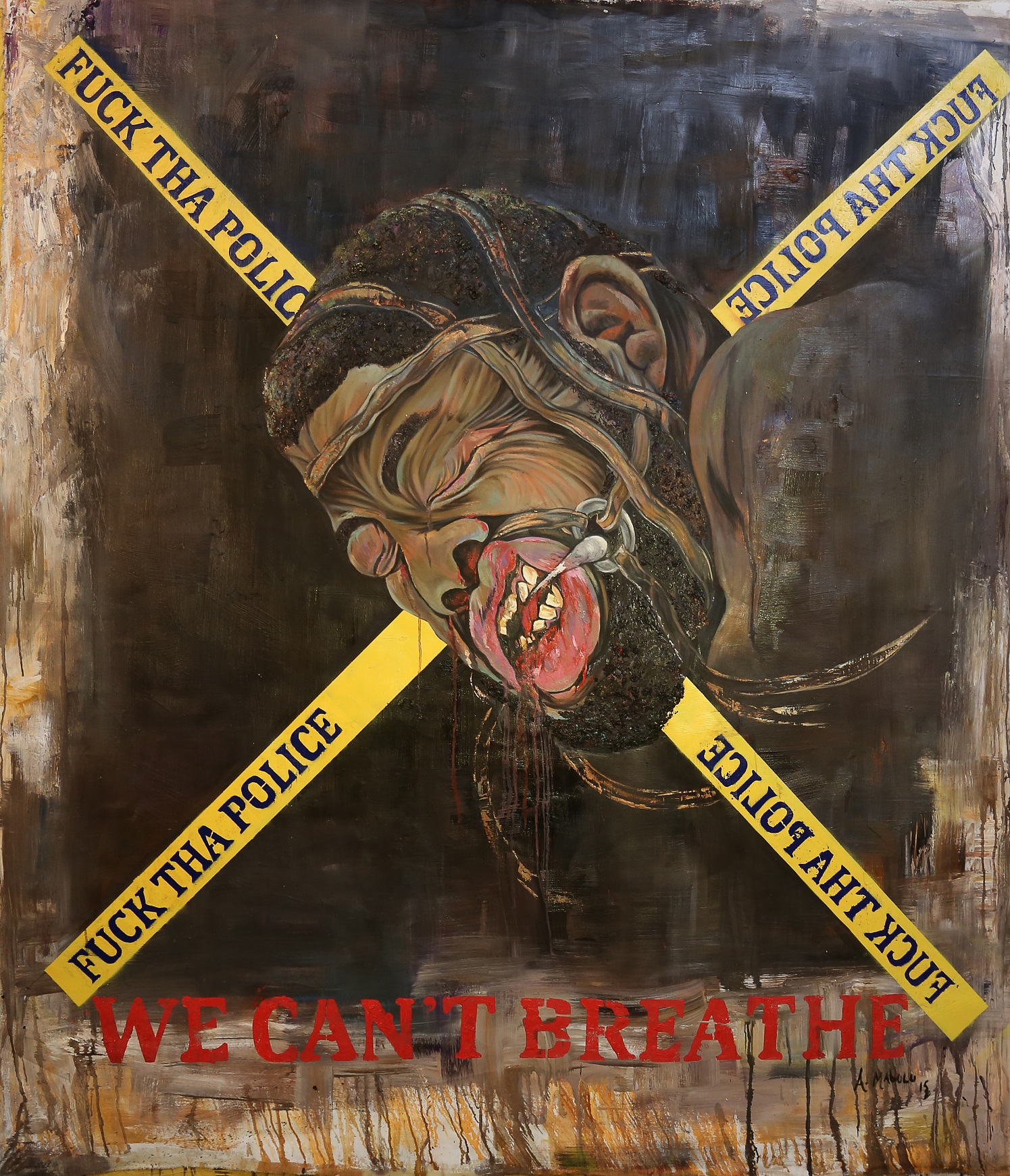 “And that is why you see me painting Jacob Zuma with hyenas because I have always seen how these leaders tend to dehumanise people.”

Today Mabulu is happy to be still standing and remains dedicated to his cause after the hullaballoo from Pornography Of Power is beginning to die down. His new works features paintings that take aim at Zuma once again depicting him as the Joker character in the Batman films, especially as portrayed by Heath Ledger in the Dark Knight. The image is imposed on a Lucky Star tin of fish with some rather stark words that describe Zuma as a “treacherous beast” and identifies the ANC as the “enemy to black lives improving”. Another similar painting done on a Lucky Star tin features Nelson Mandela with the caption, “Sold Out” and that piece is titled, Dignified Bastard. The words on both works are self explanatory and do not need further elaboration.

“It seems that everything is a joke to our president, and this is some sort of circus nightmare that we are living through,” Mabulu says greatly annoyed.

“You see what happens in parliament. We are not being taken seriously. The people have become the laughing stock of those in power.” 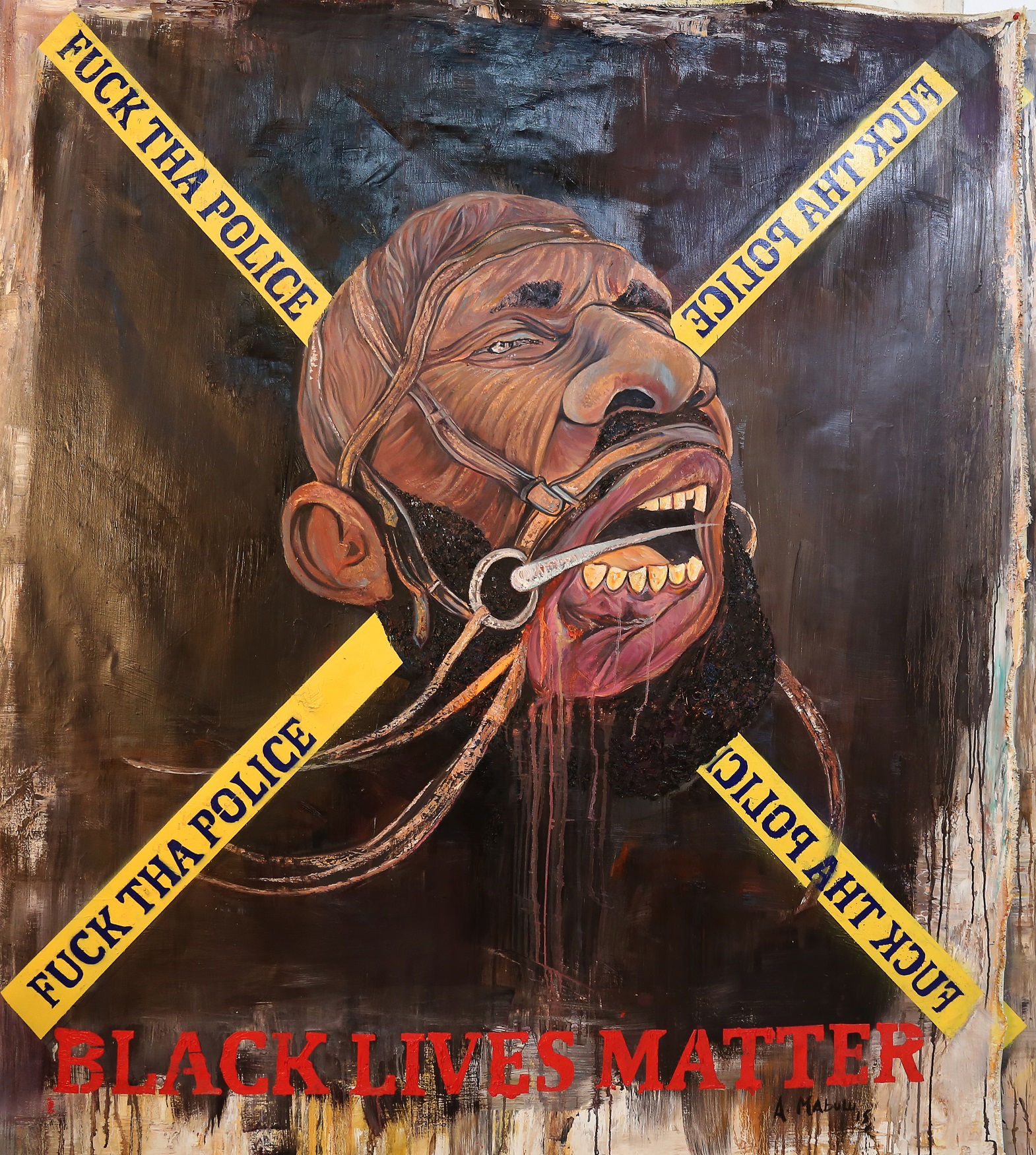 The works depicting police brutality titled Black Lives Matter and We Can’t Breathe illustrates the depth of a problem involving police that exists here at home, in America and the world at large. The work is based on slave master Willie Lynch who bred slaves to be physically strong, but mentally weak.

“If you look at how the government treats people on the ground and how mineworkers in Marikana were treated, you will realise that they are the ones who are victims of the Willie Lynch venom,” Mabulu states.

“As a black man, I value the lives of black men, women and children. Willie Lynch made it a point that slave owners hung one slave in front of the others in order to discourage any ideas of rebellion. This is what happened in Marikana where the mineworkers were treated in such a fashion. We are being dehumanised at the hands of the police and the state. It is important for me to raise these issues because I love my people. I will continue to do so, for as long as I have my brain and these hands to paint the truth.”