What is The Value of Black Life?

The right to life is said to be the most fundamental of all rights. If ever there was a ranking systems of rights, the right to life would assume prime position. It assumes priority over all, particularly in a country like South Afrika that abolished capital punishment.

In my experience as a Black person the right to life and dignity are the same rights that have been violated consistently through systemic violence and associated material conditions this system creates. The conditions under which most Black people live in are not just inhumane, but pose a direct threat to their right to life. The Covid19 situation has crystallized a lot of things that have been in plain sight. One of these is that the world will not come to a standstill for Black lives. It also brought to the fore the extent to which these non-derogable rights have been violated if one analyses the existential crisis that has been persistent for Black people.

The right to water for example directly links to the right to dignity and life. Denying a human being (Black person in this case) access to clean drinking water only received urgent attention during the lockdown. What makes matters worse is that this provision is as a stop gap measure and all the areas identified affect Black lives without exception.

Black people are scrambling for food parcels because they are severely deprived and dying of hunger. Our inability to afford basic necessities for both personal nutrition and personal hygiene strips us of our dignity and threatens, or ends our lives. One wonders what will happen in the post lockdown period.

It is Black people who have an abnormal mortality rate that is fuelled by existential conditions that result directly from our dispossession, subjugation and poor responsiveness by both the state and the private sector. It is the same Black people that are facing judgment and false beliefs that they are lazy, dependant and not skilled enough to provide for themselves.

All these are ignorant of the reality that Black people have been violently dispossessed of our land which in essence is the basis for our right to life, and our right human dignity. It is ironic that the same constitution that pronounces on the non-derogability of their right to life and dignity, is the very one that legitimizes the conditions that violate the very rights it purports to protect.

There is both a relationship of causation and correlation between the violation of the non-derogable and inalienable rights of Black people and the Constitution of South Afrika. The popular narrative though is designed to put to slumber our cognitive ability to discern these contradictions.

Our existential problems as Black people are not of our doing. We may be complicit in how they are sustained but we sure have not been party to their creation. We also cannot escape the reality that the systemic violence we experience daily has a face that we all know. We may be afraid to say that it is white but it doesn’t and won't change the reality. The state is an extension of the system and not the system itself.

The question then is; what price are we prepared to pay in defence of our lives and in protection of our dignity? It is only this question that will answer the question; of what value are Black lives? 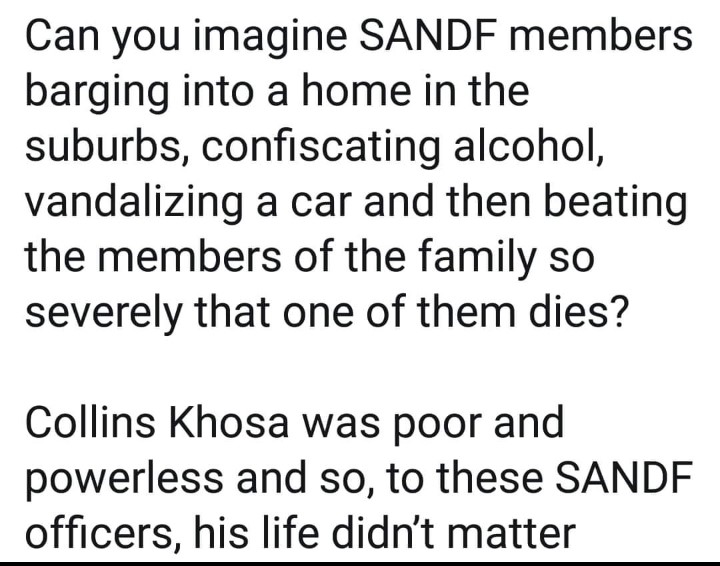