It cannot be that those who are dead remain dead. In any case, those who are dead always refuse to die. At least this is the case our continent, AFRICA. For us death means a different thing. It means not a cessation of existence, but symbolizes an eternal living, something perennial if you like. Ancestors we call them. Rituals we perform for them. Sacrifices we do for them. Their spirit we invoke. In times of crisis. In periods of confusion. In need of healing. In fact it is not just that the dead refuse to die but we too refuse to let them die because without their spirits and memory we will forget who we are. We will forget where we come from and we will not know where we are going.

The name is familiar. The name is well known. The man is famous, a legend of some sort. For many things, his lifestyle, his style, his wives, controversy, music and politics. But what stands out the most is how unapologetic he was about his blackness and Africanness. At a time when Africa was under the yolk of colonialism and when everything western was a standard of greatness Fela said ‘Teacher Don’t Teach Me Nonsense’. Fela in many ways told white people (colonizers) that FUCK YOU and your ‘Expensive Shit’. He told us that there is nothing wrong with being Black. He told us that we are beautiful and fabulous and capable and loveable. That is why his legacy continues to live on. That is why Fela Kuti will not die. That is why we must not let him die because if we do, who will remind us of our strength, resilience and power? 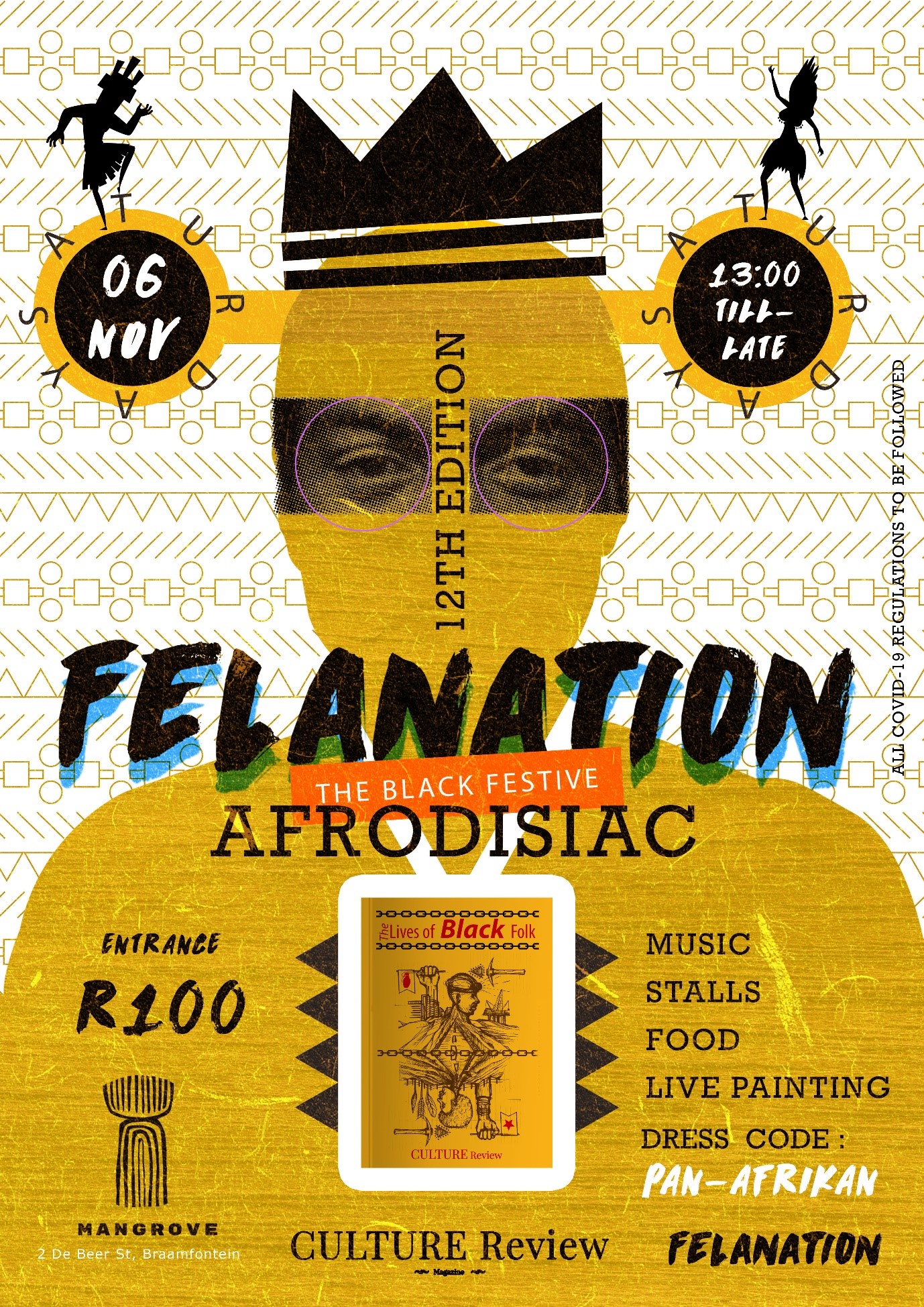 This year we invite you to celebrate the life of Fela Anikulapo Kuti with us. We call it the Felanation to emphasize how Fela was able to facilitate unity amongst Africans and how through his work was able to create a community. Fela was able to create a bond grounded on love for Black people. His manifesto has always been simple, to find alternative ways to live and breathe in a world of subjection and sorrow.

The 12th edition of Felanation is produced in collaboration with CULTURE Review Magazine. CULTURE Review is A pan African platform that reports on arts, culture and politics. The magazine has recently published a book titled The Lives of Black Folk. The book is a collection of essays by esteemed writers from South Africa. Focusing on various thoughts on the state of Blackness, the book is in line with Felanation’s ethos and some of its tenets will manifest and spill unto the dance floor, the market stalls and the general revelry on the day. The book also features an essay by Tseliso Monaheng on Fela Kuti.

“The nation has not yet found peace from its sins; the freedman has not yet found in freedom his promised land,” WEB Du Bois wrote 117 years ago in his seminal book of essays The Souls Of Black Folk, describing the unhappy reality of Black life in the US. In a more famous quote from the same collection of essays, Du Bois observed, correctly, that “the problem of the Twentieth Century is the problem of the color line”. More than a century later, and it is an astounding, heartbreaking and by turns galvanising and paralysing fact that these diagnoses apply accurately to the sick society that is present-day South Africa. In this book-length collection of essays and experiments edited by Kulani Nkuna for Culture Review Magazine, various writers grapple with the enduring effects of racial capitalism on the so-called rainbow nation, in this, The Lives Of Black Folk. The book among other titles, original apparel, and lifestyle brands will be on sale on the day.

This year’s theme for Felanation is Afrodisiac. A Black gathering where we get to remind each other what community and solidarity is about. In this gathering we want to invoke the spirit of love and relentless compassion, sacrifice and strength, care and tenderness. We will be reminded of how Fela Kuti’s music making has opened up our imaginations to what a truly just Black society might look like. We will be reminded of how moments of freedom do not only have to end on stage. We can carry them everywhere we go the in the same ways that Fela Kuti did.

In this year’s gathering we will be looking, feeling and listening to Fela Kuti’s early and lesser known works. We will lay bare his genius and dig deep in the process of his music making. We will also look into other musicians and genres he has influenced. We will listen to music from Congo, Mali, Zimbabwe, Ghana to mention a few.

Because the aesthetic of Africa is not singular please attend wearing an attire that represents Africa for you. It’s a Black Festive, one you do not want to miss.