When will we, who call Ga-Kgosi Galeshewe home, ever have the guts to confront the diamond- stealing- murdering- raping British, for what they did to our Warrior King, Kgosi Luka Mpolokeng Jantjie? (1835-1897).

It is said that after the Langeberg Uprising 1896/1897 also known as 'Galeshewe's War or 'Ntwa ya Matlhananelo (an uprising led by Kgosi Jantjie, Kgosi Toto and Kgosi Galeshewe), a British invader, captain of the Cape Town Highlanders (James Samuel Searle) led the mutilation of Kgosi Jantjie’s body.

For the sum of £5, he asked a fellow soldier to cut off his head and boil it in the officer’s mess, for him to take home as a trophy. Up to this day, it is not known where the body or head of Kgosi Jantjie is. Through their son, the Jantjie family recently made attempts to resolve the mystery of the whereabouts of our King’s body.

“My great-grandfather Capt. James Samuel Searle of the Cape Town Highlanders was responsible for the mutilation of the body of Luka Jantjie during the Langberg Campaign of 1897….”

“…I am Dikare the second, commonly known as Tumo Jantjie. Luka Jantjie is my great great grandfather and I was named after his son Dikare. We are really searching for our grandfather’s body and head. If you strongly feel uncomfortable [with] this, please contact the McGregor museum because we are doing this together…”

As you know, between the 7th and 14th centuries, as part of the Arab and later the European invasion of Afrika, both the Arabs and Europeans habitually mutilated the bodies of Afrikans and displayed them publicly.

One of the things that was common with the Arabs was the castration of the Afrikan males they had taken captive as slaves. They would take Afrikan women as their sex slaves (a practice that continues today in the Arab controlled parts of Afrika and the so called Middle East).

With the Europeans, part of their colonial project included the capture of Afrikans (mainly men), beheading them and then displaying their headless bodies in public (lynching). The Europeans also raped Afrikan women and men (especially on the slave ships and plantations).

It was also common for European war generals to take the heads of Afrikan Warriors as personal trophies. Many of the so called army generals of the slave trading era of today’s European states (like Leopold of Belgium, Napoleon of France), happily indulged in this bloody ritual.

The lynching and raping of Afrikan men (by the Europeans) was mainly done to those Afrikans who dared to resist. The main objective of beheading and publicly lynching Afrikans was to terrorise them to the point that they shouldn't even dare think of rebelling against their white enslavers.

One such recent genocidal European adventure that mainstream historians or Black politicians don’t often talk about is the genocide carried out by the Germans against our people in what is today called Namibia.

It is said that the German invaders killed an estimated 100 000 of our Herero and Nama kin. Between 1904 and 1907, the Germans raped and murdered (lynched) thousands of Afrikans. They even went as far as to poison water sources and starved them.

Under the direction of racist so called 'doctors' and 'ethnologists' such as Luschan and Dr Eugen Fischer, the Germans set up concentration camps and actively harvested the skulls of Afrikans and other body parts.

It is estimated that, today, there are still over 12,000 body parts of the Herero and Nama in the University of Frankfurt, 7,000 at Dresden Völkerkunde Museum, in the Charité, Berlin. 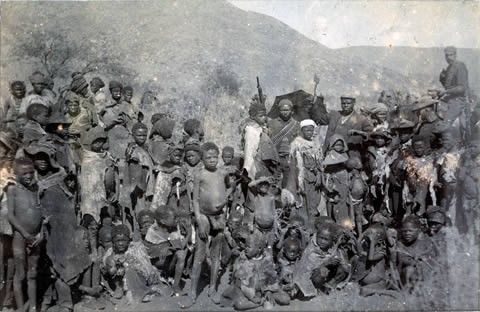 Equally important, is the fact that under the leadership of Kgosi Jantjie and Warriors such as Samuel Maherero and Henrik Witbooi, our people launched gallant resistance campaigns and they too and legitimately so, killed large numbers of European invaders.

The European invaders beheaded many of our other Warrior Ancestors such as Nehanda Charwe Nyakasikana aka Mbuya Nehanda and Sekuru Kaguvi of Zimbabwe and Zumbi dos palmeras in what is today called Brazil.

Our contemporary social, economic and political problems as an indigenous people in South AfriKKKa, Namibia and the entire Afrikan continent, have to do with the fact that, we as Afrikans have not honestly dealt with this part of our history.

And where there are sincere attempts to honestly confront this history and its continuing implications for us as a Race - there are still some among us (Afrikans), who are doing all they can to ensure that there is no honest confrontation of this history.

In order to give due honour to our Warrior Ancestors like Kgosi Mpokolong Jantjie, Kgosi Galeshewe, Kgosi Toto, Mogale Samuel Maherero, Mogale Hendrik Witbooi, our generation of Afrikan activists must muster the courage to resuscitate this hidden historical narrative and complete the noble mission of total independence that our Warrior Ancestors lived and died for.

1. Resistance In The Northern Cape In The Nineteenth Century (2012).

3. Aljazeera: Namibia: Skulls of my People