Custodians Of An Uncalculated Cool

There are few things more futile than the attempt to accurately define The Brother Moves On (TBMO). One is left only with somewhat vague and open-ended concepts like "collective" and "ensemble", which do a better descriptive service to the cause, than the word "band" ever could. Perhaps even more fitting is the conception of it as a 'movement' rather than a specific group of people involved in one said field. Likewise, futile is the attempt to categorize the sound and find for it room within the framework of some definitive genre. As with any phenomenon that is constantly in motion, there can be very little certainty about exactly what it is. Even where there is some iota of insight into its supposed form, we are plagued with the question of just how long it would remain constant in that particular state. At its core, TBMO is a living, breathing force that has moved through the South African and international music sphere with a flavour and fervour unlike that of any other creature before it.

With twelve equally triumphant and tumultuous years on their belt, the tales are indeed plenty and the contributors themselves fall onto a somewhat perennial list.

The most consistent elements and its core constituents stand like four pillars at the base of this living shrine. The four members that are most immersively lived and breathed by this energy are Siyabonga Mthembu (Mthembu); his cousin, Zelizwe Mthembu (Zelizwe); their friends, Simphiwe Tshabalala (Tshabalala) and Ayanda Zalekile (Zalekile). Each except Mthembu, holding an instrument, all of them instruments in themselves. Mthembu, a radiant mantra-chanter and singing-storyteller. Zelizwe, a spaced out and dazed genius guitarist in his own world. Zalekile, a true relisher of rhythm, his enjoyment and joy at being on stage, palpable and thick like the strings on his bass guitar. Tshabalala, concerned only with tearing away at the drum set, obsessed simply with destroying the snare and slicing through the cymbal with each strike. A quartet of possessed breaths battling the collective demon and gathering as many as they can to join the cause. 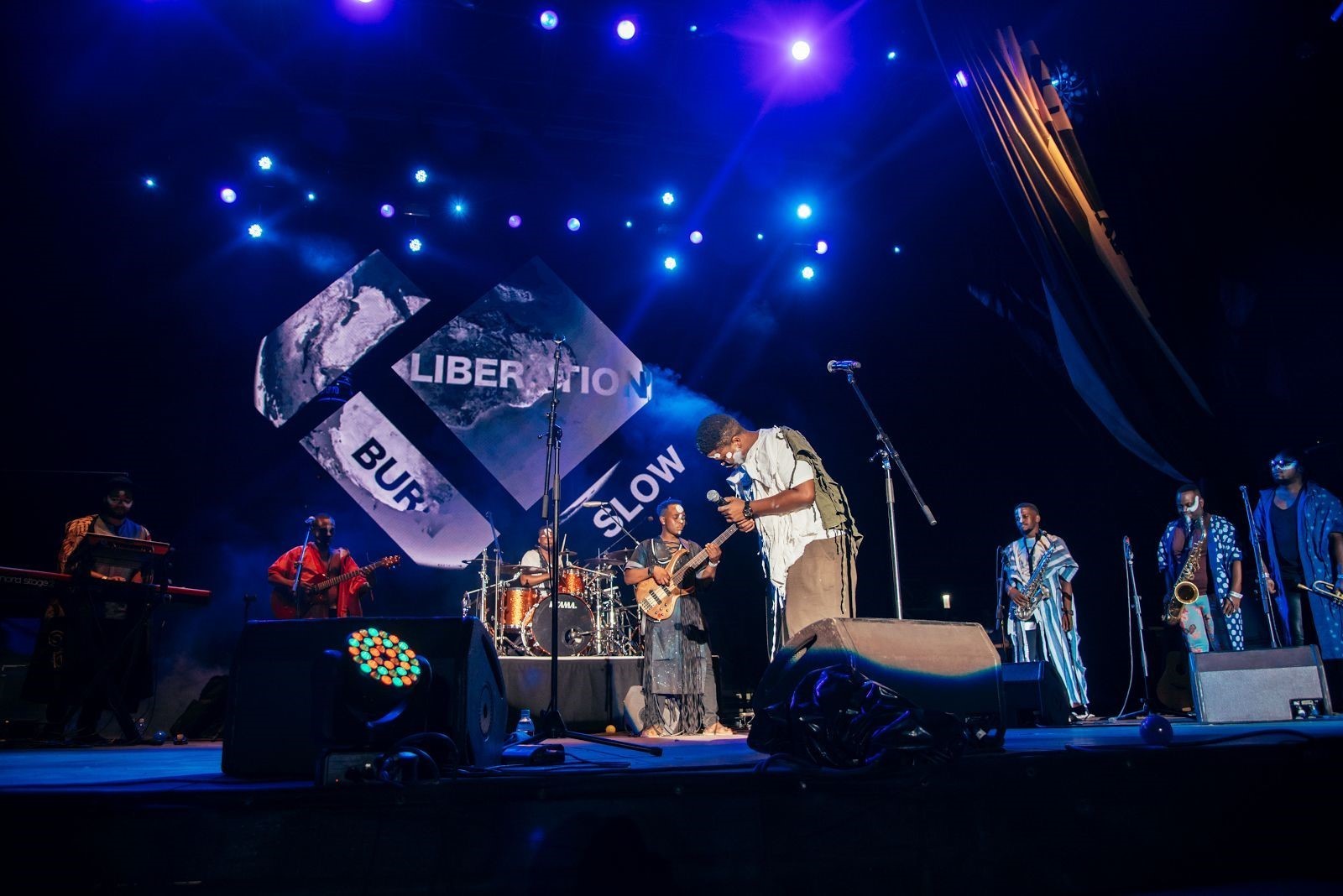 There is something in the nature of such groups or individual artists that makes for either a very awkward kind of approach to creating and delivering work or one that is uncompromisingly "cool". Essentially, there are two kinds of creators, the clumsy, cloudy-headed stumbling kind that at times coincidentally connects with something sublime, and the calculated, cool type that knows exactly what they're doing and can predict every aspect of how it should and will turn out. The former is of a character and quality of approach that requires a certain vulnerability in the face of the art and in the face of the audience. In the moment, it is characterised by allowing oneself to sit in it, to allow the vulnerability of the moment to take its course and hopefully lead somewhere liberating.

This, Mthembu believes is at the core of their approach, saying: "that's what we've been good at, we're very good at being awkward and we've become a bit too cool”. There seems a tension here between awkward and cool, where cool is too comfortable, too quiet and content. This coolness seems to be something to work against for this group, and so even with the tilt to cool, Mthembu says, "life has been trying to make us realize that we're awkward, awkward as fuck". This trait seems much aligned with the character that inspired the group's name. The Brother Muozone, as portrayed in the television series called The Wire. Mouzone is a highly respected assassin that appears completely opposite to what you would expect. On the one hand, he is one of the most renowned and feared practitioners in his field. On the other, he's somewhat of a nerd, an outsider in his own skin, too tightly fitted into his own formal outfit and in his pocket an unused handkerchief. His proper speech and gentlemanly conduct, a stark contrast to the myth around the man. And perhaps this very awkwardness is precisely what has connected The Brother Moves On to the countless other weirdos who have been drawn to their sound and energy as collaborants and enthusiasts alike.

Reflecting on earlier times, Mthembu remembers that people could not help but compare them to the BLK JKS, but he makes here a distinction: "The BLK JKS were cool man…they avoided talking and played, which was a really interesting thing. When we came, we were awkward, we talked too much”.

Without thinking about it comparatively, Mthembu acknowledges that being cool reveals itself as what it truly is over the years, which is simply a kind of performativity in itself, tending towards inauthenticity. Striving to stay as far away from cool as possible, his prayer is as such, "In my hopes, I really want us to go back to being awkward, back to being uncool”.

With TBMO having known the success they have over the years, Mthembu draws a parallel between them and their more commercial compatriots and collaborants, the cool Moonchild Sanelly and Okmalumkoolkat, "as artists who've been affirmed by this pop sensibility, but [who] are artists at their core”. He holds, that in whatever similar way TBMO came to be acknowledged, they've come to learn that "who you are at the ends of it [isn't] about the affirmation only, but it's also the very internal search for a sound and feeling”.

To them, it's often been a shock that people find their sound 'cool', which perhaps leads us to the notion that in fact there may be a kind of cool that is awkwardly stumbled upon as opposed to the curated and calculated kind. And perhaps these two serve very different purposes.

As with the long list of past members, we have another long one listing a series of dynamic collaborators over the years. Of this, Mthembu acknowledges, "we've had these weird encounters where we didn't plan for it, where it's the universe, not…some producing genius”.
There are several of these meetings that are most memorable to the collective, one of which is with UK based saxophonist and composer, Shabaka Hutchings. Reflecting on how they met, Mthembu says, "we kept meeting in Cape Town over and over…and it was such a real meeting, it wasn't [just] the music. It was the fact that he was so big in the music world and we treated him like the awkward guy that he is”. We get a sense of just how pivotal this energy is, not only to the group and how they approach their work, but also in who they are drawn to working with and what brings them together with those artists.

Of the artists that make up their current outfit, Mthembu mentions that they have found "a new horn section in Muhammad Dawjee, Mthunzi Mvubu and Malcolm Jiyane, whenever he pops in and pops out”. He says this amused by Jiyane's character and very fluid nature.

With great excitement, he announces that they are currently preparing to release their “sophomore album, ‘She Who Feeds You’, which is an activated dramatic arts, meets music [production], with the performance space set in a hotel”. He emphasizes that the album is set up in this way, not because of it being the angle they chose, but because "the story needs to be told in that way”. This stays in course with how their music has always revolved around narrative rather than notation.

Looking at how they've grown throughout the years, in their understanding of the energy and how it seeks to use them as well as how they may use it, he claims the following, "We understand that our music is medicine now, so there's that understanding that our shows shouldn't just be up there, we need to attack and come down, calm people before they leave, have a laugh at the end. Because our stuff is very hectic, it can't be misused”.

This is the sentiment with which they go into their upcoming performance at the Rhythm and Blues Virtual Concert on the 28th of May. The event will commence at 7pm and end at 8:30pm. It's a free event to be streamed on the 'African Women's Writers Network' Facebook page. The lineup includes Femi Koya, Albert Frost, Bonj, Themba Mokoena, Siya Makuzeni, Aus Tebza, Yonela Mnana, Nelisiwe Sibiya, Gunshot Blue, Andre Kriel and Themby Khumalo.