Modes of Communication: Letters From The Underworlds

Following his standout performance at NYC Winter Jazzfest earlier this month, the visionary South African pianist and composer Nduduzo Makhathini has announced an April 3 release date for his Blue Note Records debut Modes of Communication: Letters from the Underworlds, an expansive album anchored by Makhathini’s expressive piano in which lyrical, plaintive horns mingle with percussion, pained yelps and urgent lyrics. The album is available for pre-order on CD and digital formats.

“‘Beneath the Earth’ speaks to a way of locating our Gods and developing a language of communication with them,” says Makhathini. “Similar to most cultures on the continent it references the soil (the underworlds) as our symbol of communication. The tune is also based on the musical style amahubo, an art form is based on Zulu praise and lament songs, or ‘Zulu hymns’ as it is sometimes described. Historically this particular style was popularized by the great Princess Magogo KaDinuzulu, and within a cultural context it is understood as a mode and space for preservation of significant memories of the Zulu people.”

After experiencing Makhathini's powerful set at NYC Winter Jazzfest on January 11, Stereogum jazz critic Phil Freeman wrote "He’s got an album coming out on Blue Note — he’s the first South African artist ever to sign with the label — and I can’t wait for people to hear it, because it’s tremendous music. As a player and a composer, he sits right beside McCoy Tyner and Pharoah Sanders, playing a forceful but lyrical style of modal jazz that incorporates African rhythmic concepts... The pieces they performed had a swelling, passionate quality, exploratory but never losing an essential earthbound feeling. Makhathini is at the head of a small but powerful movement of young South African jazz players, and the higher his international profile rises, the better it will be for that country’s music scene and jazz as a whole. He’s a major talent.”

Nduduzo Makhathini grew up in the lush and rugged hillscapes of umGungundlovu in South Africa, a peri-urban landscape in which music and ritual practices were symbiotically linked. The area is significant historically as the site of the Zulu king Dingane kingdom between 1828 and 1840. It’s important to note that the Zulu, in fact the African warrior code, is deeply reliant on music for motivation and healing. This deeply embedded symbiosis is key to understanding Makhathini’s vision. The church also played a role in Makhathini’s musical understanding, as he hopped from church to church in his younger days in search of only the music. The legends of South African jazz are deep influences as well, in particular Bheki Mseleku, Moses Molelekwa, and Abdullah Ibrahim. “The earlier musicians put a lot of emotions in the music they played,” he says. “I think it may also be linked to the political climate of those days. I also feel there is a uniqueness about South African jazz that created an interest all around the world and we are slowly losing that too in our music today. I personally feel that our generation has to be very conscious about retaining these nuances in the music we play today.” 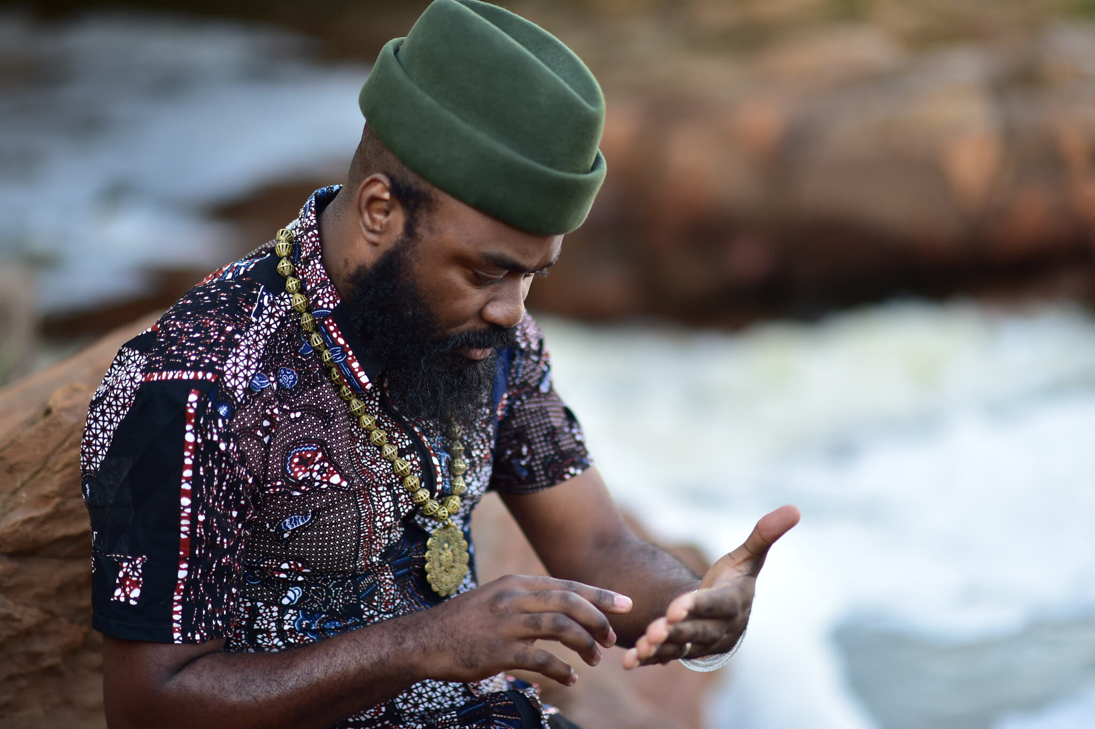 Through his mentor Mseleku, Makhathini was also introduced to the music of John Coltrane’s classic quartet with McCoy Tyner. “I came to understand my voice as a pianist through John Coltrane’s A Love Supreme,” he says. “As someone who started playing jazz very late, I had always been looking for a kind of playing that could mirror or evoke the way my people danced, sung, and spoke. Tyner provided that and still does in meaningful ways.” Makhathini also cites American jazz pianists including Andrew Hill, Randy Weston, and Don Pullen as significant influences.

Active as an educator and researcher, Makhathini is the head of the music department at Fort Hare University in the Eastern Cape. He has performed at renowned festivals including the Cape Town International Jazz Festival and the Essence Festival (in both New Orleans and South Africa), and in 2019 made his debut appearances the Blue Note Jazz Club in New York City, as well as Jazz at Lincoln Center where he was a featured guest with Wynton Marsalis and the Jazz at Lincoln Center Orchestra on their 3-night musical celebration The South African Songbook in Rose Theater. He is a member of Shabaka Hutchings’ band Shabaka and the Ancestors appearing on their 2016 album Wisdom of Elders and the forthcoming We Are Sent Here By History, and has also collaborated with artists including Logan Richardson, Nasheet Waits, Tarus Mateen, Stefon Harris, Billy Harper, Azar Lawrence, and Ernest Dawkins.

In addition to producing albums for his peers (such as Thandiswa Mazwai’s Belede and Tumi Mogorosi’s Project Elo), Makhathini has released eight albums of his own since 2014 when he founded the label Gundu Entertainment in partnership with his wife and vocalist Omagugu Makhathini. Those albums earned him multiple awards and include Sketches of Tomorrow (2014), Mother Tongue (2014), Listening to the Ground (2015), Matunda Ya Kwanza (2015); Icilongo: The African Peace Suite (2016), Inner Dimensions (2016), and Reflections (2016). His 2017 album Ikhambi was the first to be released on Universal Music South Africa and won Best Jazz Album at the South African Music Awards (SAMA) in 2018. His Blue Note debut Modes of Communication: Letters from the Underworlds will be released in 2020.