We keep moving. From point A to B we shuffle in the hopes of making it to a desired finale, far from our beginnings. We suppress the involuntary flashbacks of our shared past to avoid being slowed down by a past we cannot change. We don’t mind forgetting because what we had is far from what we want. So what good is remembering what is fixed in stone while having access to the enigmatic fluidity of the now?

After being drawn to the glistening sepia hue of an aged monochrome photograph at home, Nevhutalu began developing a practice that saw him recapturing the memories his family had archived. Influenced by the aesthetic of screen printing, Nevhutala conceptualised a practice that marries photography and painting to convey a message that is as nostalgic as it is comfortingly euphoric.

In a bid to encourage the viewer to slow down and recall this past, the subjects in Nevhutalu’s work are often captured while they wait. Whether standing against a wall or sitting on the hood of a car, the sitters’ eyes look far out in contemplation or expectation.

“We all have photographs like this at home. If not, we have the memories. Yes, I’m reliving someone else’s memories but I’m familiar with them,” Nevhutalu says.

“These everyday scenes of anticipation are taken from Nevhutalu’s family photo albums. With the odd exception of a man, the subjects in Nevhutalu’s work are his mother and the women connected to her. 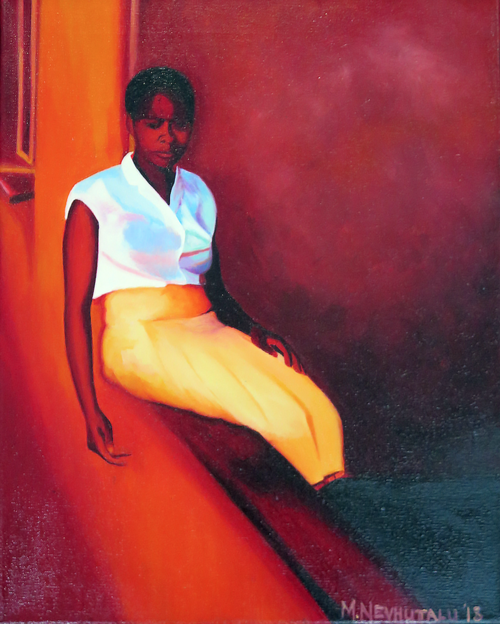 “There are a lot of women in my family, I was raised by all of them. I think that’s where me painting women comes from,” the artist explains.

Unlike the present and what is to come, pessimism toward the past is secure and free of uncertainties. By revisualing moments that were captured before or shortly after he was born, Nevhutalu’s work challenges the obsolete, immovable manner in which the past is often perceived.

While his pieces are based on existing photographs, they are not exact replicas thereof. As a starting point Nevhutalu refers to the photographs regarding the sitter’s body language clothes and setting. From that point onward Nevhutalu’s interpretations are free from referential boundaries to reimagine the scenes.

First his reimaginations see the scenes playing out in intensely warm hues of mostly orange, red, yellow, and brown. This is coupled with softening the sitters’ distinct facial features, beyond recognition, in a bid to make them the representations that resonate with the viewer’s personal set of memories.

Through the use of familiar settings, warm colours and a haziness that is reminiscent of Karin Preller’s aesthetic, Nevhutalu’s Archives of Colour encourages the viewer to find solace in the vagueness that comes with resurfacing distant memories.

Sometimes Blacks Are the Problem