I recently posted on Facebook about how I no longer wish to see what’s happening around the world. I made reference to the Ray Charles interviews I had been watching on YouTube. In one of his interviews, Charles was asked if he would like to see again (he lost his vision at the age of 7). He responded by saying that there are some things that he would like to see again but only for a few days, like the moon and the stars. But if he was offered the chance to see again for the rest of his life, he'd probably turn down that offer with conviction.

Charles said he preferred not to see. He referred to the horrible things in the news that he'd rather not see. He said he actually felt sorry for people with eyesight who have to put up with all that terror.

I wish I could unsee all that has been happening around the world in the past few weeks. I wish I could unsee the death toll rising daily. I no longer want to see the coffins, the tears, the terror. I want to see all of it, no more. What I was mostly hoping not to see however, is an army of soldiers in the streets. I had not seen them in many moons, not until this morning, when I was buying Coke at the petrol station.

Three men in camouflage uniform walked in, and I froze. My mind was cast back to moments in my life where I witnessed and was subjected to the brutality of both the police and military forces.

I was nine years old. The year 1993. The province, KwaZulu Natal – a battlefield at the peak of the ANC vs. IFP political warfare. Our streets, smothered red always in blood.

Blacks slaughtered each other in pursuit of party supremacy. 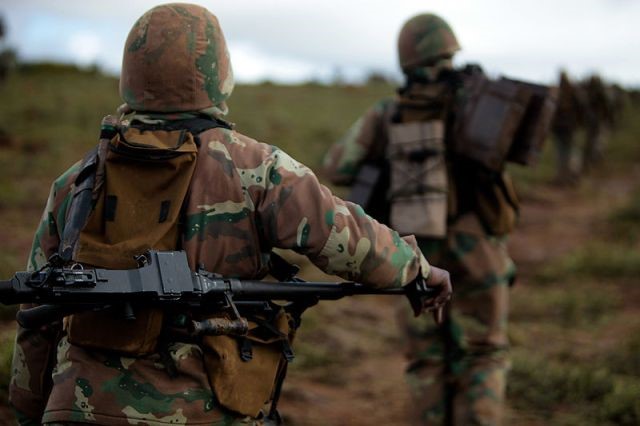 I grew up in a place called eMondlo, on the outskirts of Vryheid, a small town in Northern KZN, our area was one the hot spots at the time. The SADF (South African Defence Force), which was referred to as uMsadafu or amasotsha oMsadafu, were assisted by the then KZP (KwaZulu Police), the "Zulu Popeye” as referred to by the community. These “security forces” raided our homes in search of guns and illegal weapons.

We were subjected to a similar kind of brutality to that which plagues Blacks in the townships today. I remember vividly the day soldiers visited our home. When raiding homes, they would not use the gate as their point of entry, they tore down the fence and threw themselves in.

When uGog'MaSibiya, my grandmother, heard a few days before that the soldiers were coming, she anticipated that they were coming to conscript young boys into the army.

Ugogo did not freeze. She had a plan.

She camouflaged all the boys among my siblings in girls' clothing. She gave me my elder sister's grey school dangara and tied my head with iduku laseZayoni. To complete my Queen Of Katwe Lupita Nyong’o look, she gave me her white sandals.

Boy was I fly!

"Ya ntombazana, uphi umalume wakho"? Growled a soldier while he grabbed me by the dangara.

"Ngiyaxolisa malum' phoyisa". I screamed, shivering; I felt my soul escape. I avoided eye contact with this giant of a man, my eyes fixed firmly on his shiny combat army boots.

I maintained my cover. I was a girl.

It turned out that the soldiers were not deployed to conscript young boys into the army as Gogo had expected. She had sipped the wrong information from uMaNkosi, her friend, over a cup of tea one evening.

The soldiers were looking for guns.

They specifically asked for my uncle and demanded that we open his room and show them his guns. He was a trouble maker, uMalum’Mandla. I liked him a lot. He used to buy me Cadbury sweets. He was a nice guy. Gogo used to introduce him to her other gogo friends as 'uthunjana', the last born. He was Gogo's favourite. He was trouble.

uMalum’Mandla and his friends were associated with all sorts of ills in the community. Gogo attempted may times to redeem him with church. She failed. He was an ANC supporter my uncle, boldly so in a community dominated by the IFP. Our home was always threatened because of him. He was close friends with Mbhasobheni Mdlalose, an ANC supporter who was shot and burnt to death that same year. I witnessed that gruesome murder and was always scared for uncle Mandla's safety. I was always scared for our safety.

"Siphi is'bhamu sikamalume wakho wena?" The soldier who held me by my dangara kept asking me. I don’t think he was aware of the drops of water that emerged from beneath my dangara and crawling down my legs, he just kept on growling, "Siphi isibhamu"?

He only let loose and let me go when one of his colleagues came out of my uncle's room holding a spear in his one hand and a shotgun on the other. The two weapons indeed belonged to uMalum’Mandla.

At that moment I wasn't even trying to hold the pee back, I just let it flow. I remember my grandmother giving me one look and quickly looking away, pretending she didn't see ukuthi ngiyazichamela. (She would later laugh at me).

As the soldiers were making their way out of our home, Gogo noticed that one of the soldier's hand was bleeding. He had hurt himself while they were breaking my uncle's door. The wound was severe and he was bleeding profusely. Gogo quickly went into the house and came out with a bandage and a bucket full of water. She stopped the wounded soldier and ordered him to extend his hand. She washed the blood off his hand and tied up the wound in an attempt to stop the bleeding. As she was doing this, Gogo kept saying the words, "Kwanele manje bantabami”.

I stood there with my siblings, in awe, watching!

Here was my grandmother, performing first aid on a wounded soldier, who had also posed as an enemy to us. It was from that moment, and many other moments, that I learnt something from my grandmother: Always be kind to people. Even those who threaten to hurt you.

Every time I read about police brutality and see the videos on social media platforms, I remember the events from the past. Some I have read about and some I have witnessed first-hand. The Sharpeville massacre and the Marikana mayhem.

I had long been out of school when Fees Must Fall broke out, but I went out to the streets to support the students. I had my share of tear gas spray at the Union Buildings in 2015.

I do not want to see anymore. I wish I could be blind for the next coming month. I wish all these stories that I write were just from my imagination, not things I have actually seen.