The Hidden Dangers of the White-Liberal Narrative

The recent De KKKlerk saga as raised by the EFF in parliament has predictably sparked a national conversation (mainly instigated by the mainstream media of course).

The narrow mainstream liberal discourse that is fixated with what the UN said, De KKKlerk, his apology or apartheid-is extremely dangerous for us the natives of Afrika.

While it is important for the natives to continually ask critical questions about what happens in our land, it is equally important for us to be critical of the very nature of the questions we are asking.

Long before the National Party (NP) came to power or apartheid was made law, we the natives were already a conquered and subdued people. Some of the historical records suggest that there was invasive European presence (Portuguese) in the southern tip of Afrika, as early as the 1400s. This was followed by Dutch invasive presence in the 1600s, in what is today known as the Cape Peninsula.

This explains why there is a recorded account of native resistance between the periods 1658 and 1803. Resistance that is synonymous with such great names as Gogosa, Doman, David Stuurman, Sandile Makhanda, to name but a few.

When the British joined the Dutch in the European Cape imperialist project after some conflict, they agreed to co-oppress the natives and designed an anti-black political system that will enable their project to function in the Cape.

This system was characterised by a plethora of anti-black laws that were aimed at entrenching, legitimising and legalising Anglo-Dutch invasion of Afrika. This system that developed (not without its internal convulsions) in the Cape would later become a template for Anglo-Dutch co-oppression of the natives, across the southern tip and culminated in the colonial union government of 1910.

During this period, the European invaders legitimised their invasion of our land with such anti-black laws as the Native Location Act of 1884 and the Squatter Laws of 1884. One of the most far reaching pieces of anti-black legislation of this era is the Glen Grey Act of 1894.

In my view, the Glen Grey Act was a precursor for the colonial legislative model for the formation of the British colonies such as South AfriKKKa, South Rhodesia (Zimbabwe) and North Rhodesia (Zambia).

The Glen Grey Act was co-authored by the British mass murderer, Cecil John Rhodes and his secretary William Milton). It was introduced in the Cape House of Parliament on 30 July, 1894 (the very parliament from which the EFF sought to eject De KKKlerk).

Would the ejection of De KKKlerk have given this colonial parliament any legitimacy? Of course not!

Back to the Glen Grey Act.

This Act is critical in deepening our understanding of the nature, evolution and legalisation of European invasion in the southern tip of Afrika. I strongly suggest you read the full text of the speech that Rhodes made to introduce this piece of repugnant anti-black legislation in the Cape Parliament. Part of what Rhodes said in parliament when he introduced this law, is:

"...Now, I say the natives are children. They are just emerging from barbarism...My idea is that the natives should be kept in these native reserves and not mixed with the white man at all...In the interest of white people themselves, we must never let this happen, white labour can never compete with black labour in this country".

If we go back to the Glen Grey Act and other anti-black laws before it, we will realise how absurd it is to make apartheid or the ascendancy to power by the National Party, the essence of our fight.

Not even subsequent anti-black laws such as the Native Land Act of 1913, the Urban Areas Act of 1923 or the Native Trust Act of 1936, qualify to constitute the essence of our fight.

For this reason, it becomes even more of an absurdity to make De KKKlerk (the individual) or what the United Nations said, the essence of our fight. Equally absurd is the call to have De KKKlerk's Nobel Peace prize confiscated by the Noble Committee.

What is the difference between De KKKlerk's Nobel Prize and the one given to Madiba? Why does it seem as though we as Afrikans want to legitimise the Noble Committee?

What has the Noble Committee done to advance Black liberation? This Committee is a body that was invented by and is controlled by our race-enemies.

Its agenda is to confer awards on people (white and Black), who don't pose any threat to the global agenda and programme of white supremacist- capitalism. Take a close look at the politics of the Black political figures who got Noble Peace prizes.

The Trick of White Liberalism

The hegemonic ideological discourse that seeks to make apartheid the essence of our fight is nothing else but another elaborate intellectual trick that emanates from the white liberal world. 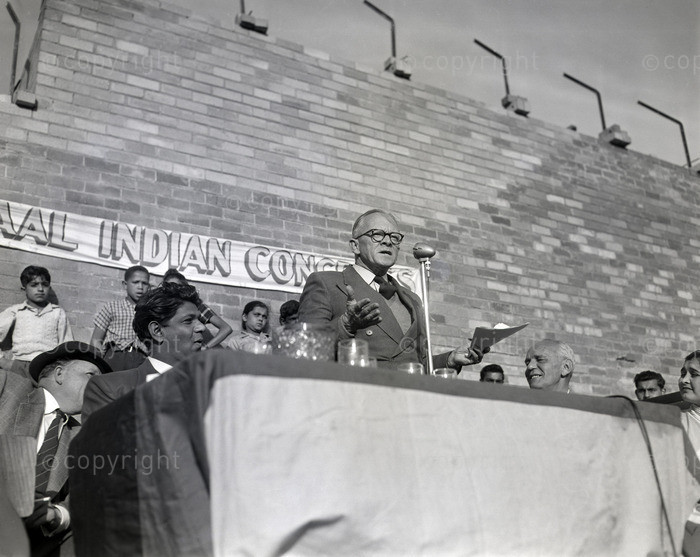 Part of its objective is to fool Afrikans into believing that Dutch imperialist aggression (towards us) was worse than that of the British. Both the Dutch and British are invaders here in Afrika and therefore our oppressors, murderers and race-enemies.

The discourse that seeks to make apartheid the essence of our fight also seeks to deflect our attention away from the Lembedian question of Nativity, which is interwoven with the Land Question.

For instance, the liberal anti-apartheid discourse has made room for white anti-apartheid activists, who while they drown themselves every day in the exclusive pool of white privileges-they can also claim they are not responsible for apartheid, and they too, are against it (but they are not against enjoying its benefits, especially economic).

The Question of Nativity

The essence of our fight today should arise from the very disturbing act of the continuance of the uninvited, invasive, illegal and illegitimate presence of European invaders in Afrika.

Therefore, the question that should propel the essence of all authentic Black resistance today is not who invited De KKKlerk into the colonial parliament, but rather what does De KKKlerk (and all other European invaders), want in Afrika?

Who invited them? What right do they have to be here? These questions can only be asked by people who know themselves to be the natives of the land of Afrika. People who know that, it is they and they alone who own every square inch of Afrika and that everybody else who is not a native, but is here today - is here because they have been invited by us - the natives of the land of Afrika.

The main agenda of the white liberal anti- apartheid discourse is to kill the revolutionary Lembedian discourse of nativity. Once we as Afrikans honestly resolve the question of who are the natives of Afrika?

The question of who owns the land (which is Afrika), doesn't arise. And if it arises, it answers itself. Most importantly, once we have honestly resolved the question of Nativity, we will not call for the mere ejection of De KKKlerk from parliament, but rather his ejection (and that of all European invaders), from the land of our Ancestors.