Black People not Constitution Under Threat

‘Where we situate the problem is an outcome of the depth (or lack thereof) of our analysis of phenomena’-Veli Mbele, 6 July, 2021.

The retrieval of the above quote was in reaction to the vulgar reductionism that continues to be offered as political analysis of what is currently happening in parts of KZN and Guateng, by some Blacks (who some refer to as clever blacks).

Their “analysis” reminded me of the shallowness we often see when celebrity political analysts try to help us understand what is commonly referred to as service delivery protests or rebellions by Black university students.

However, the trigger to my musings is the question: is the arrest of former president Zuma the root cause of all these rebellions or did his arrest simply provide the perfect trigger for a problem we all know existed for a long time?

For several years now, inequality (Black inequality to be exact), has been rising steadily in South AfriKKKa. This is why the Bretton Woods institutions declared South AfrikKKKa as one of the most unequal countries in the world, with a per-capita expenditure Gini coefficient of 0,67 in 2006.

For those Black people who were oblivious to the reality of chronic and endemic Black inequality in South AfriKKKa, the advent of the Coronavirus and the lockdowns provided us with a crystallisation of this historically evolved and structural problem.

Let us just look at some figures. The National Income Dynamics Coronavirus Rapid Mobile Survey, notes that “during the first wave of the pandemic, while many lives were saved, approximately 2,8 million people lost their jobs under the lockdown.

This figure represents an 18% decline in employment from February to April 2020.”

StatsSA recently informed us that South AfriKKKa’s “unemployment rate rose to 32.6% in the first quarter of 2021 from 32.5% in the previous period. They also say “this was the highest jobless rate since comparable data began in 2008”.

This means that the number of unemployed persons increased by 8 thousand to 7.2 million, employment fell by 28 thousand to 15 million and the labour force went down by 20 thousand to 22.2 million.

Furthermore, the expanded definition of unemployment, including people who have stopped looking for work, was at 43.2%, up from 42.6% in the prior period. Also, the youth unemployment rate, measuring job-seekers between 15 and 24 years old, hit a new record high of 63.3%. 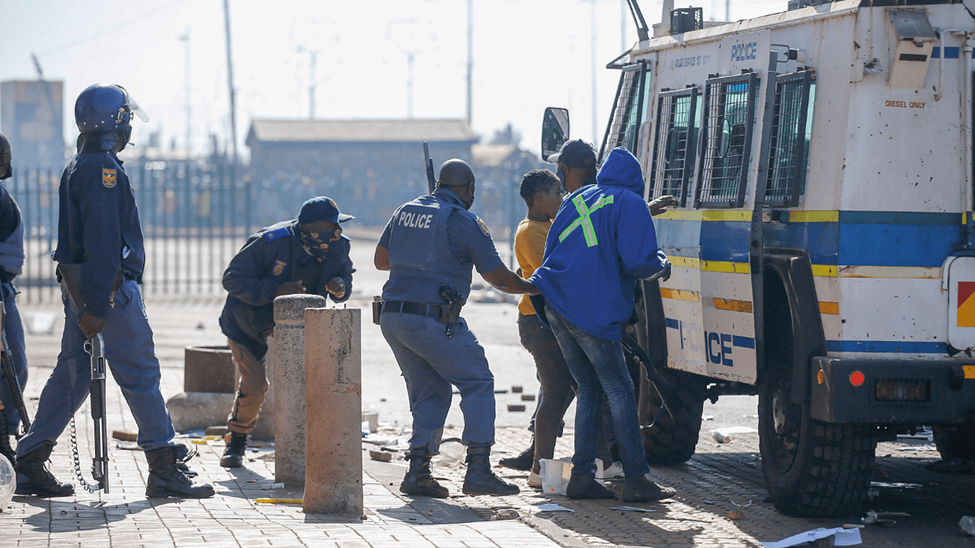 If you study media reports on these rebellions in KZN and Gauteng at least, you immediately notice at least two things:

One, it is Black people who are involved in this and two, many of them are young. Now, are these not the same people that the data referred to above is talking about?

So, even if police presence is increased or the army is deployed (as it is already happening), you are not going to solve the root cause of these rebellions by arresting or killing more Black people.

What you are likely to achieve is to increase the possibility of something akin to Marikana, if not worse. The army was recently deployed to the so-called Cape Flats. Was the army able to deal with the root cause of so-called gang violence in the Cape Flats? Of course not!

The proclivity to mechanically respond to protests by ordinary Black people, through the deployment of security forces, is a sign of leadership failure.

But it is also the tendency of neoliberalists, who erroneously believe excluded groups are 'inherently violent' and 'irrational' and must be dealt with as such.

So, how did we get here? At a macro level, what we are seeing today are the economic consequences of the Nicodemus elite pact that was concluded over 30 years ago (between agents of the apartheid regime and some of ‘our’ political leaders’) that culminated in the CODESA project (something many don't want to openly talk about).

Related to this, is the failure of President Zuma's political party to (as the ruling party), meaningfully change economic relations in South AfriKKKa and organise them in favour of the Black majority.

So, instead of focusing on this and the actual ‘looters’ and ‘criminals’ and their black political mantshingilanes, the white-controlled media and their celebrity political analysts, have us ensnared in mind-numbing bourgeoisie legalese.

With the help of the white-controlled media, the real looters and criminals, have created an atmosphere in South AfriKKKa, wherein the articulation of legitimate Black frustration (at whatever level) is viciously criminalised and delegitimised as ‘looting’, ‘criminality’ or ‘violence’.

Essentially, Black people are not even allowed to 'breathe' in their own land. And when your ability to breathe freely is suppressed, you get bloated and eventually explode.

Yet, the continued landlessness, pauperisation and terrorising of Black people through the police and the army, doesn’t lead to our political analysts sensationally declaring that “Our democracy/constitution is under threat and needs to be defended”.

But as soon as the pauperised Black majority rise and speak for themselves, what do you get? They get bashed and criminalised by Black people, who have not lost their jobs or source of income as a result of the lockdowns and have the luxury of being able to ‘talk’ mysterious English, through the facility of their WhatsApp groups.

You have these kinds of Blacks constantly screaming “Our democracy/constitution is under threat and needs to be defended”.

During the first few months of the lockdown, over 10 unarmed Black people (who were not involved in any protests), were killed by the state security forces. Was there ever a huge uproar from the white-controlled media and the celebrity political analysts? Of course not. So, I am wondering: is 'our' constitution and 'our' democracy really under threat? Or are Black people and black dignity the two things that have and continue to be under threat in South AfriKKKa?