What Is Dead May Never Die: MAKHAFULA VILAKZI’S MANDELA IS DEAD

On 26 October 2019, Makhafula Vilakazi together with his cohort of vagabonds who go by the name of Kokorumba (a euphemism for Cockroaches) led by Koketso Poho’s velvet wailing and backed by Nhlanhla Ngqaqu’s zumba-ba-ba-zumba gwij’ basslines andLuyolo Lenga’s overtoned Umrhube and tickling Udu rhythms, dragged a stubborn bull by its horns into the kraal-cum-auditorium of Soweto Theatre. As usual for a ceremony of this manner, a call was made to the people to come bear witness to what was promised to be a brawl with the beastly figure of Mandela depicted in Slovo Maphanga’s artwork and poster for the event. In Maphanga’s artwork we see the ‘enchanting figure of peace’ transformed into an unbearable sighting. This beastly figure is donned in Madiba’s October 1962 court date swaggering Thembu royal outfit of isiyaca neck-beads nemibhaco. As if this is not enough beauty for the father of the nation, Maphanga insists on having another piece of neckwear to decorate Madiba, except that this piece of neckwear once reserved for those deemed to be traitors or witches is not so majestic for the Thembu royal. In the surround of this beastly face is a sketch of the map of South Africa, making Mandela/South Africa synonymous. The background is the colour of fire - gazole and matchsticks are on standby: 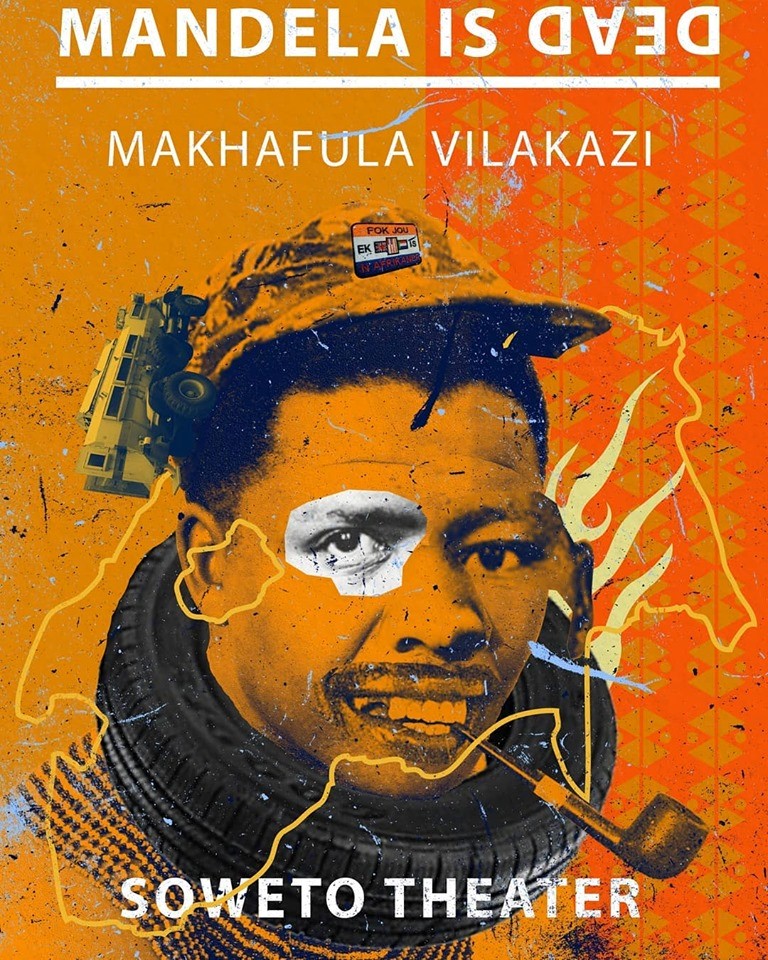 The best person to answer this question would be Makhafula himself; but we must ask it in this way: what would make him go for what has become an easy target of scorn in the form of Nelson Mandela, in this stay-woke-type generation of ours?

Again we might have to look at Maphanga’s artwork for one last time, bearing in mind that Mandela and South Africa are represented to mean the same thing. In the absence of a working title let’s call it Amandel’Afrika, referring to both the artwork and the synonymous relationship between Mandela and South Africa as depicted by Maphanga. In Maphanga’s Amandel’Afrika, an earnest smile with missing molar teeth, clenching on a smoking pipe is imposed on Mandela’s face. Second only to Louis Armstrong in deceitfulness, this pipe smoking smile demands its own face, but only manages to sneak in just that - a smile. The owner of this smile - the sound of whose voice Makhafula Vilakazi and his cohort desires so much to hear as evidenced in their opening cry - “Sobukwe ulele kanjani? Siyakukhumbula. Sobonana kwelizayo” - remains only a memory to those who were there to see and hear the man. Unless the excavationists of Amandel’Afrika decide the time to air out this muted voice; Makhafula and Kokorumba can only hope to see him kwelizayo (in the next world), and that is if when they go to the next world, they won’t be met with Mandela acting as an intermediary for all that lived life in his South Africa. The tension between Madiba magic and this man with the smile is far more serious than we can imagine, and it is not by coincidence that the Madiba dance ended its tenure on earth on the day of this man’s birthday (05 December). Think for a second that other outworldly battles are possibly happening.

For the boxer that we see in pictures, Mandela is definitely poking thorns (uRhol’ihlahla) and throwing jabs on Sobukwe’s resting spirit. We are in Africa anyway, these things happen.

There is another figure demanding space in Maphanga’s Amandel’Afrika; his gaze, the opposite of the mona lisa effect, stares obstinately with one eye. His eye is not shaded with the colour of fire as is the rest of Maphanga’s figure. He is probably putting on a fight as he himself says:

His offspring in the form of groups like the iPhupho L’ka Biko (Biko’s Dream) jazz band is also making attempts to put on a fight and to testify to the potency of his weapons. However, judging by the current situation in Amandel’Afrika, Biko might, as Mbe Mbhele suggests in his poem, Biko is Dead, be in need of some introduction to Black consciousness.

In this world and the other one, it seems that the Madiba magic glitters as an emblem of many possibilities for what looks like an eternity. Think of how Mandela Bridge spits people in and out of the two worlds it separates, day and night.

Mandela is unwilling to die alone in the necklacing carried out by Maphanga; with him will be his beastly comrades in eye and smile.

As an African people, what do we do to an (un)holy spirit of our departed kinsmen that is a menace to the living and to the departed?

Perhaps the motive for Makhafula to title this gathering “Mandela is Dead,” is to precisely answer this question. He seems to know what he’s supposed to do, but complains about the difficulty of the task and the labour it requires:

As if the stay-woke children of the city of gold needed any more reasons to justify their contempt for sleep, the 120+ seater kraal-cum-auditorium was filled to capacity with everyone wanting to catch sight of this (un)holy ghost. If they knew what they were getting themselves into, that one you will have to ask them. The singing along whenever the Kokoromba’s invoked a familiar selection in the struggle’s discography is evidence that they were however, consenting participants.

Wazi Kunene, who did the difficult task of master of ceremony, jokingly bestowed Makhafula Vilakazi with Mzwakhe Mbuli’s long held title of “People’s Poet” and the crowd approved. Old age will not make the fight fair for Mzwakhe Mbuli to defend his title; I suggest he retires it, but only if Makhafula is interested in having it.

To sweep the fields for this (cleansing) ceremony was Nomashenge Dlamini with her electrified partly sung, partly spoken rendition of Ingoapele Modingoane’s epic poem Africa My Beginning, Africa My Ending. Under Silla Dulaze’s diligent cut with the lighting, Makhafula and Kokorumba brought the beast down, leaving the room in euphoric nostalgia; but the beast rested only for a moment, only for us to return to the spell of our Amandel’Afrika an hour later.

1
What Is Dead May Never Die: MAKHAFULA VILAKZI’S MANDELA IS DEAD
2
Kulture Blues Festival: To Sleep or To Stay Woke?