A Storm In A Nkandla Teacup?

South African liberal democrats, social democrats and so-called progressive democrats - including those who project themselves as champions of Economic Freedom and Radical Economic Transformation and quote Marx, Lenin, Fanon and Sankara for political currency - blindly extol the virtues of a constitutionalism.

South African liberal democrats, social democrats and so-called progressive democrats - including those who project themselves as champions of Economic Freedom and Radical Economic Transformation and quote Marx, Lenin, Fanon and Sankara for political currency - blindly extol the virtues of a constitutionalism.

When the EFF dared to propose that parliament get rid of the clauses in the constitution that are an impediment to changing the patterns of ownership of the land and the economy, the self-styled champion of RET, Jacob Zuma chastised the EFF as opportunistic anarchist. He vouched that he and the ANC will never ever pursue the land reform and transformation agenda outside of the precinct of the liberal constitution of SA. Furthermore, Zuma told anyone who cared to listen that he is one of the architects of the current constitution and will do everything in his power to defend it.

This was consistent with the assurances that Jacob Zuma gave Queen Elizabitch and the captains of global capital upon his election as ANC president that he is not going to move even an itch away the economic policies of the ANC. This was also consistent with the pronouncement of Jacob Zuma in his state of the nation adress in his second term in office that participation in Brics is not a replacement of their Western partners but is complimentary to their relations with the West.

Zuma said this at the time some overzealous theorists who vouch by African nationalism and Black nationalism had crowned him an Anti imperialist Sankara of our time. 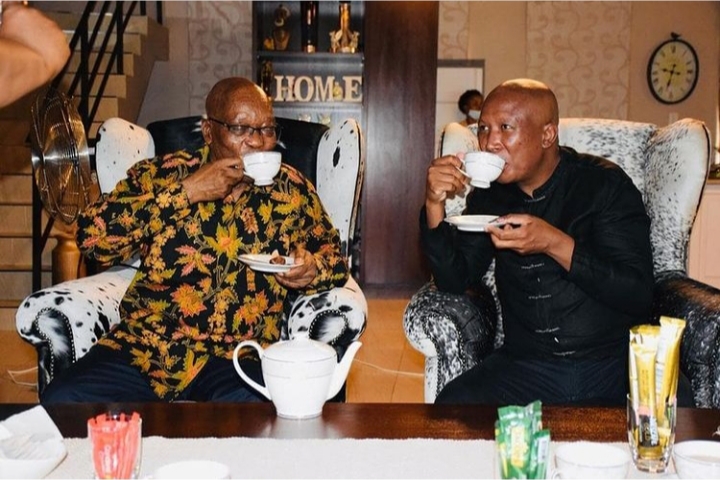 At the drop of the hat the same Zuma - facing a litany of resurfaced and new battles with the law - was mouthing radical soundbytes against ideopolitical usages of the law and the constitution, and was being charaterised by the EFF as a constitutional delinquent.

With Malema and Zuma being in a delicate position where they are both vigorous defenders of liberal democratic constituionalism and vibrant adversaries thereof in action, what are they likely to speak over that cup of green tea? Is Black Solidarity for Black Power the subject of this meeting? Here again there is a conandrum. The two gentlemen are both unrepentant advocates of nonracial progressive democratic politics of the Freedom Charter with its the notion that " South Africa belongs to all who live in it" and "the land shall be shared among those who work it" and radical African nationalist fighting for Economic Freedom and Radical Economic Transformation. What storm is going to come out of the Nkandla teapot? Re tla re ke dipitsi ga re re di bona ka mebala.

1
A Storm In A Nkandla Teacup?