South Africans have observed scathing headlines in the South African press demonising protesters participating in the current unrest in Gauteng and KwaZulu-Natal. These negative stigmas are carried onto social media and within our national consciousness. We must realise that the consequences of dressing these protests up in the musk of “evil” will cause our population to respond in ways that escalate violence and further oppress the most vulnerable.

To understand what demonising Black protesters leads to, we must look no further than the history of our own country where the co-ordinated vilifying of Blackness has existed since the formation of the Union of South Africa. It is not fashionable to use history to analyse present times, but we must first look backward to understand what awaits us when we move forward.

Call it what it is: “Swart Gevaar”

An opinion article in the Mail and Guardian recently expressed that, “South Africa is tragically witnessing a planned and co-ordinated insurrection by the faceless enemies of democracy”. News24 had a flurry of opinions summarised by one of its leads, “Deputy State Security Agency Minister Zizi Kodwa says the unrests happening in parts of KwaZulu-Natal and Gauteng are “sophisticated” and seem to be driven by people who are ‘experienced in running operations’”.

The entire corporate media landscape, even GroundUp, has been consumed in this single narrative: the protesters are an organised danger to our country. It sounds very reminiscent of the apartheid-era “Swart Gevaar” (Black danger) slogans. South African History Online explains the origins of this kind of anti-black talk, “[J.B.M. Herzog] realised that united Blacks posed a threat to white minority rule in South Africa, so he used “Swart Gevaar” (Black danger) slogans in his speeches and campaigning as a tool of getting whites to vote for him in the 1929 election”. This escalated into large social narratives about blackness, wherein any group of Black people gathered in groups were considered organising resistance, and were appropriately separated, assaulted, imprisoned or even worse, massacred.

This may sound like an exaggeration, but there is clear historical proof of this. The apartheid government banned Black political organisations in the 1960s, including the ANC and PAC. The decade prior saw the passing of multiple Acts to police Black movement and association, such as the Riotous Assemblies Act of 1956 which made explicit reference to “hostility between the European and non-European inhabitants of the Union” marking the text with a language that made it clear this Act was addressing the assembly of “non-European inhabitants”.

There is the fact that the apartheid government opened fire on 5000 anti-pass protesters at Sharpeville, killing 69. Another 176 were killed when the police shot brazenly at youth during the Soweto Uprisings. In Kimberley in 1952, 13 were killed during the Mayibuye Uprising. And the apartheid government did not only kill Black people for protest. There is also the horror of the Langa Massacre where 35 people were killed by the police, while attending a funeral.

If you tell people for long enough that Blackness is dangerous, you empower the state to take drastic measures against Blackness. It may seem like a cheap political ploy to call on the 34 that the South African police killed at the Marikana Massacre in 2012, but the reality is that what happened at Marikana was preceded by years of portraying striking workers as “violent” and “dangerous” – by an unprecedented Swart Gevaar that was much more co-ordinated and effective than anything the apartheid state could achieve due to our advances in technology.

Our corporate media machine is instantaneous, capital-heavy and immensely powerful. It can feed dozens of articles in a single day, dedicate 24-hour programming to events, curate entire narratives and feed it to almost every single citizen through television, radio, print and digital or social media. That is nothing like what the apartheid state had at their disposal, making the effects of this new Swart Gevaar all the more pertinent and effective. 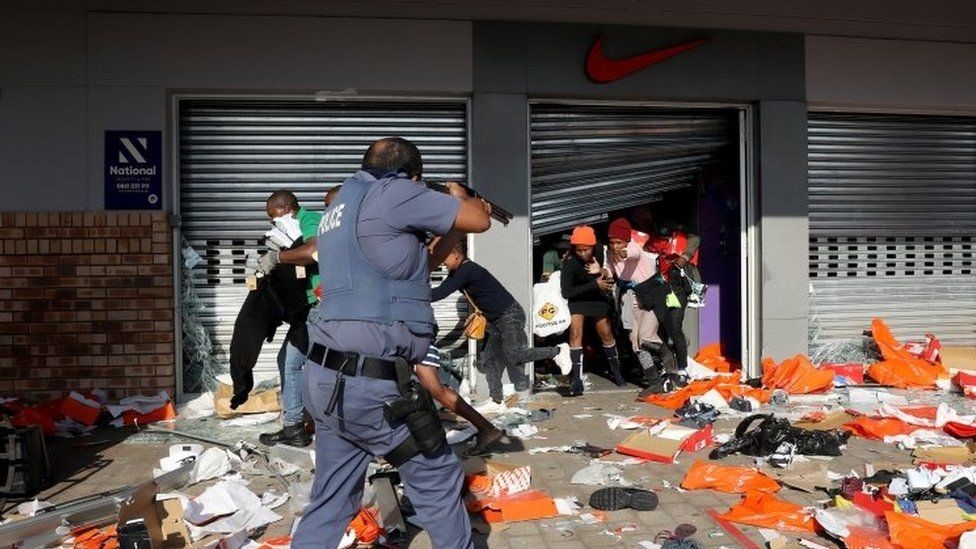 Much of these historical examples were indeed rebellions against the state. Black people even openly mounted an initiative called the Defiance Campaign. But to call such gathering “dangerous”, “violent” or “insurrectionist” severely misunderstands just how non-racial, non-violent and democratic the intentions of these political groups were, and how the tactics we would call violent were pent up from the frustrations of a state that simply refused to end the oppression of Black people. Kwame Ture put it quite succinctly, saying “In order for nonviolence to work, your opponent must have a conscience”.

But still, these massacres occurred while Black people were fleeing, or were standing behind a fence, or were walking down a street toward a funeral. They weren’t holding weapons and shooting back. Some who were killed were just bystanders. They were not at all what the “Swart Gevaar” narratives said they were. The first Black person killed during the Langa Massacre was a fifteen-year-old on a bicycle. Recall the famous image of a slain Hector Pieterson being carried by Mbuyisa Makhubo, with Antoinette Sithole by their side. Were they the danger? Yes, according to the narrative, Blackness is the danger.

Returning to present events, one finds that the narrative has not changed. People in power (government, corporate media) still view the Black and poor as violent and dangerous. We are told, without any evidence, that they are orchestrating coups against the state, and are targeting vital infrastructure to bring our country to ruin. The pundits arguing this do not take a step back to analyse how ridiculous this sounds. They also do not care for the consequences this will have on the Black protesters.

This narrative empowers the police and the deployed military soldiers to use lethal force. It further gives permission to an unregulated private militia to take matters into their own hands, forming their own blockades, unwarranted searches, seizures and armed threats. It is a pity that our corporate media, with all their resources, are not covering these events.

But the message is clear. Do not defy. Obey. For these people, order is when Black people suck up to their oppression, and do nothing about their hunger or poverty. Or, perhaps, use processes like elections, forums, and NGOs to solve these problems – despite all the years of evidence showing that hunger and poverty are getting worse, precisely because our government is implementing austerity.

We need to look up and ask ourselves, does Ramaphosa’s administration have a conscious? Am I empowering the use of lethal force against Black protesters? Why are things the way that they are right now? Is it really as simple as thousands of people plotting a coup? How can we actually solve the issue of poverty? Why am I not more focused on solving poverty? Most, crucially, one must ask themselves, “Are Black people allowed to be defiant?”