When I heard Mr Percy Mtwa (who wrote, directed and starred in the play) alongside his co-stars Mr Tshallo Chokwe and Mr Terrence Ngwila scream out those words at the end of the play, I couldn’t help but clap as hard as I could, yell as loudly as I could behind my mask and got on my feet. I looked around and noticed how everyone else who was in the theater had the same thought. These three gentlemen deserved the standing ovation they received.

It was a Sunday afternoon and Bopha was scheduled to start at 15:00 at The South African State Theatre and because I dislike tardiness, I wanted to get there early so I could secure my favourite seat (Third Row Center) though I ended up sitting on the second row, which could possibly be my new favorite spot from now on. I was greeted by a large crowd of fellow theater lovers which seemed even larger because of all the social distancing that had to be adhered to. I could barely recognize anyone, it’s hard to tell people apart with masks on. With each of us sanitized and temperatures checked we were slowly making our way through. 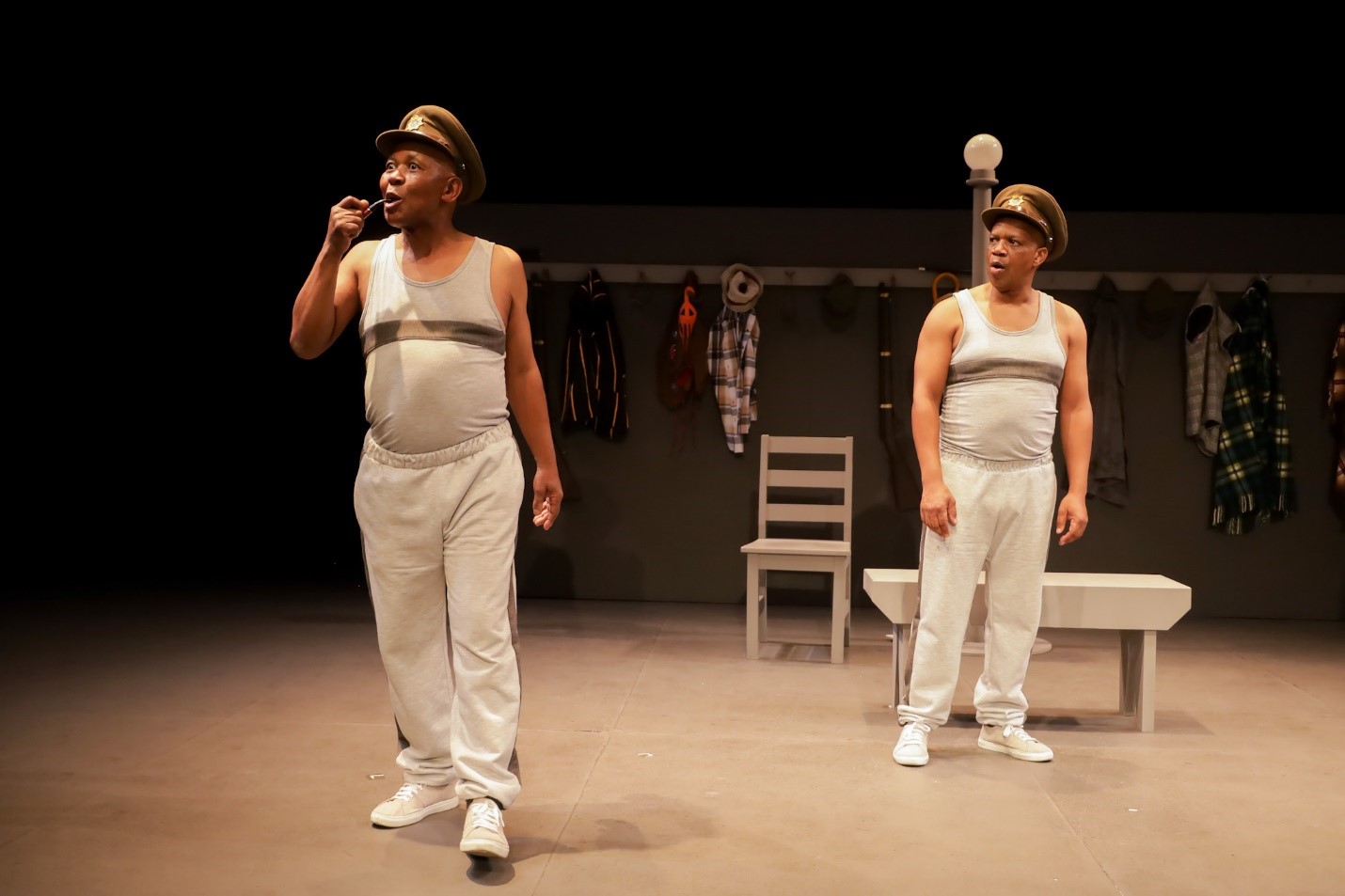 It was exactly 14:55 when I sat down with my bottle of sparkling water and found comfort in the second row. The stage was lit blue, as people were streaming in, speaking ever so softly in anticipation of the show starting at any moment. We were all sitting a seat or two apart from each other which I can imagine limits ticket sales per show. Times are hard and the opportunity to watch shows such as Bopha is a great treat for art enthusiasts. The South African State Theatre remains consistent in serving us with quality entertainment.

Speaking of quality entertainment, each actor in this well written and exceptionally delivered three-hander, had to portray more than one character. I saw Mr Percy Mtwa transform from a law-abiding police man into a ntsu sniffing elderly woman. I saw Mr Tshallo Chokwe become a rural man with a rooted Sotho accent who had trouble pronouncing his “R” and become a super confident and angry doctor who throws very big words around without missing a beat and displaying raw emotions. Allow me to tell you what a journey Mr Terrence Ngwila took me on when he played an Afrikaans man, from the accent, the ridiculous laugh, even his gestures and body language. I walked away feeling like I saw more than three people on that stage and that is what story telling is about. Our imaginations were highly activated. 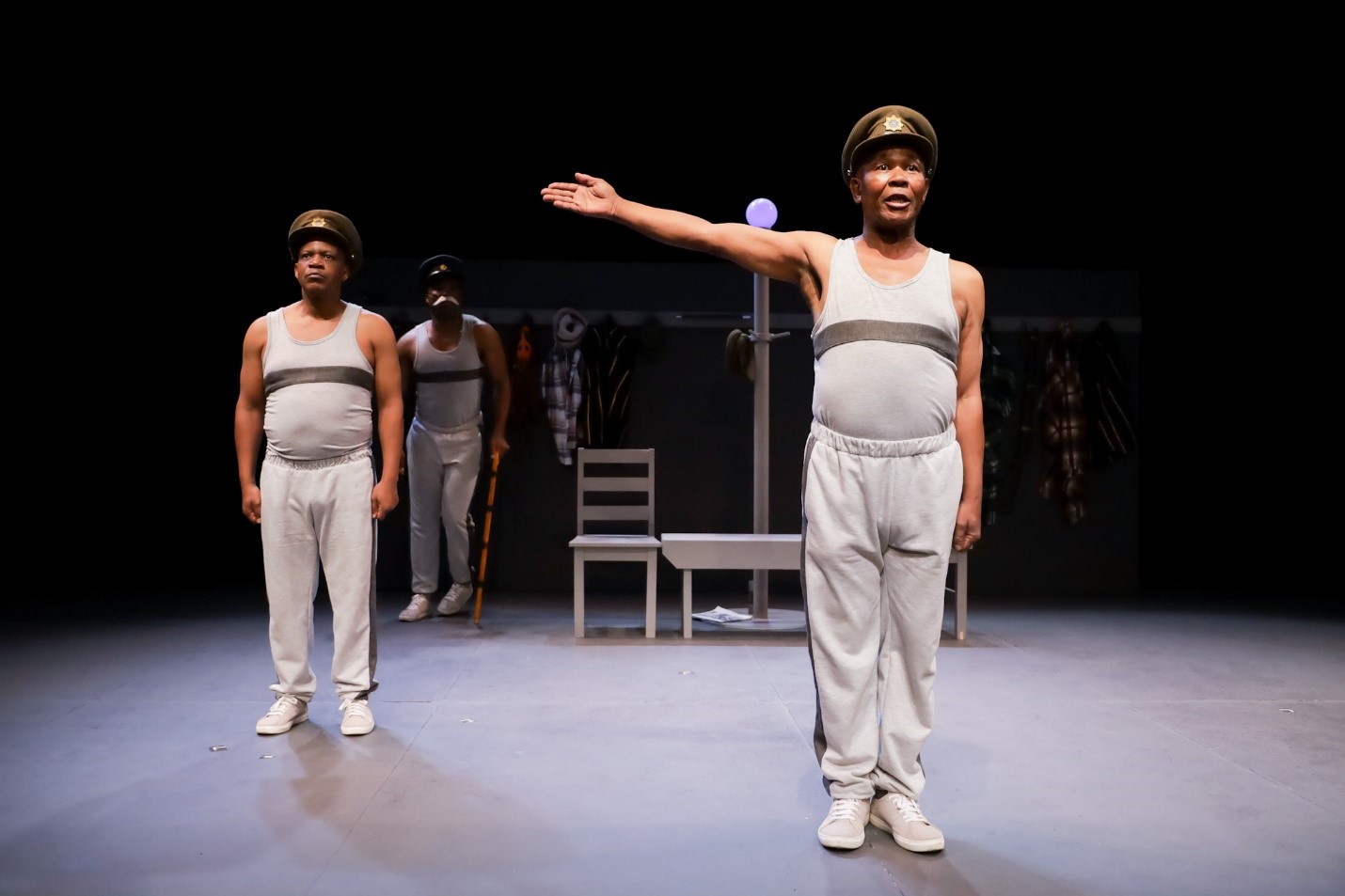 Bopha is about the dilemma that Black policemen had to face while serving under the apartheid law and I watched it drawing from the memories I have from that era. I came to learn that there were still parts of that period that I didn’t know about and Bopha catered to that. I had no idea how hard policemen of that time had it, having to choose between your superior and your people, especially family should never be a choice any man should have to make but if it does come to that then Njandini (played by Mtwa) got it right in the end.

This play is so beautifully crafted that even those who are born post-apartheid, will relate. The humor, the talent, the execution and the overall talent is inspiring to say the very least. There is a line that moved me to the core of my being delivered by Mtwa when he was playing a father who had just witnessed his son in a prison cell refuse to give into the law of the white man. He said – My son raised his black power fist with so much power, it was like his hand was going to break off from his shoulder. (Not sure if I quoted him accurately) you have to check it out for yourself. You have until June 13th.

It was then that I had to sip my water in an attempt to stop my tears from escaping my eyes. It was such an honour to watch bra Percy in action especially after he had to step in for Mr Bheki Mkhwane who had to be excused for health reasons.