Since the recent murder of a European farm manager in Senekal (South AfriKKKa), I have been hearing some political analysts and even Afrikan people, talking about the threat of 'civil war' between Afrikans and Europeans.

I don’t share the view of an imminent 'civil war' between Afrikans and Europeans in South AfriKKKa, for the reasons being advanced in mainstream discourse.

The Europeans who are 'settled' in South AfriKKKa today are here as a result of a project of unprovoked European aggression against Afrikans. A violent project of conscious and sustained invasion that was characterised by mass murder, mass rape, land robbery and the destruction of cultural institutions carried out against the natives: Afrikans.

This is why Afrikans need to understand that, properly understood, an invasion is an act of war. No Afrikan invited the Europeans who today arrogantly claim that Afrika is theirs too. They invited themselves and when they came here, they subjected us the natives to all manner of unprovoked racist misogynistic violence. Secondly, it gives the South AfriKKKan Europeans the status of natives when they are not. On what historical basis does a conflict between Afrikans (natives) and Europeans (invaders) in South AfriKKKa constitute a 'civil war'?

Europeans in Afrika are the invaders and Afrikans are the natives. When we the natives of the land legitimately respond to foreign, unprovoked, imperialist, racist aggression, how does that constitute 'racial tension'?

Thirdly, Afrikans never created a polity or political entity called 'South Africa'. The polity we call 'South Africa' today-is a spiritual successor to the Dutch Zuid Afrikaansche Republiek (ZAR), (1852-1902) and a direct product of a resolution of the anti-black British parliament in 1909.

It is essentially a product of a racist-misogynistic-criminal project of European invasion by the British and Dutch (who today deceptively refer to themselves as 'Afrikaners' or 'boers'). So, when we Afrikans say 'our country', what exactly do we mean?

Since invading various parts of Afrika (including the part they misnamed 'South Africa'), the Europeans subjected Afrikans to centuries of unprovoked racialized war. So we Afrikans have been and continue to be victims of this European-led racialized war against us. 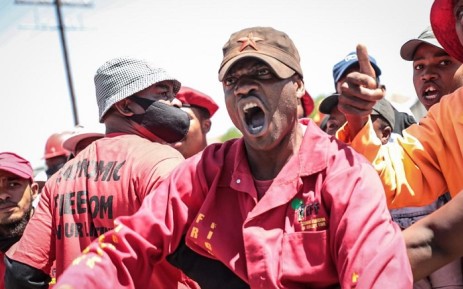 So what new 'race war' or 'civil war' is going to start as a result of the incident in Senekal? In South AfriKKKa, the Europeans are a foreign minority but they control our wealth. For centuries, the natives have and continue to be the slaves of the European invaders. Does our slave status not constitute a race war?

In my view, it is historical illiteracy of the worst kind to accuse Afrikans in South AfriKKKa of stoking 'racial tension', when they are legitimately resisting the racialized violence of a violent, anti-black, foreign, and uninvited minority.

Formulations such as 'racial tension', 'reverse racism', 'hate speech', 'reconciliation', 'social cohesion' and similar constructs, have been designed for and are being used to achieve several neo-colonial objectives, two of which are:

• To absolve the Europeans from centuries of the crime of genocide against Afrikans; and

• To serve as instruments with which South AfriKKKa’s political aristocracy, manage and manipulate the anger and aspirations of the natives: Afrikans.

We Afrikans (not just in South AfriKKKa), have been in the midst of a race war since our first point of contact with the Europeans, over 500 years ago. A race war that has taken both direct and indirect forms, visible and invisible forms.

So it is a monumental falsehood for the analysts or some politicians to say there is a 'race war' or 'racial tension' that is brewing in South AfriKKKa. The race war against us has been going for centuries. We Afrikans are just too mentally damaged to realise this.

We Afrikans don't even know we have been in the midst of a centuries-old race war. Lastly, why does this scare tactic about an imminent 'civil war' in South AfriKKa mainly arise when Afrikans decide to stand up and challenge the arrogance of white power in South AfriKKKa?

Kanti what is the expectation here? Are we to understand that for the security and comfort of a select few, we Afrikans, (the natives of the land) must continue to live like rats in the land of our Ancestors? Are we just to keep quiet and accept our slave status as the natural order of things?

Is this what is expected of us Afrikans? There is no threat of a 'civil war' in South AfriKKKa. All that we are seeing are the combined manifestations of the cowardice of South AfriKKKa's Black political aristocracy and the legitimate rage of the invaded dispossessed conquered Afrikan people. The natives who live like rats in the land of their Ancestors, have decided to rebel.

1
Civil War? — What Civil War?
2
A Life Supreme
3
Black People As The Only Force of Change In The Settler-Colony