Recently, a friend pleaded with me on whatsapp and in person to stay away from relationships if I am unemployed. Sporting a pained dramatic voice and stern expression, he said, “this is South Africa, and you know women”. It’s February, the month of love and expectations; and suddenly most men are in relationships they wish never existed. Last year, this urge to flee culminated in a conference many South African men “escaped” to.

While it was an imaginary conference, it emanated from real socio-economic conditions. These conditions stretch back to the root of single parenthood, a sad reality where mothers are beset by responsibilities that fathers flee from. Lack of money, unemployment sometimes fuels the temptation to abandon responsibility. 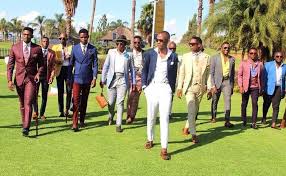 The men's conference, while mentioned jokingly, is an impulse to flee from responsibilities, which many absent fathers can tell you a lot about if they were around.

As a boy I recall a slightly greying men patting my shoulders in a paternal embrace. He was my father, back from the "conference", after a few years of absence. As he pecked my forehead, his prickly moustache scraped my skin. My father had returned. However, I was naive enough to think it would be for good. Alas, his dedication to the men's conference was deeper than I had imagined.

Our mothers and kids often endure our fathers’ decisions of embarking on this conference. Alone again, my mother carried us on a meagre salary.

We've reached a new a decade, and this precarious battle for the presence of fatherhood is showing mixed outcomes. Ostensibly, on one side there’s a new generation of devoted fathers, but another side presents a new generation of single mothers. Similarly, last year alone I observed several young mothers trudging the journey of parenthood alone. And given our fathers’ ways, it wouldn't be too dramatic to point out which conference these fathers went to.

But sometimes, this conference, imaginary or not, may have grounds for justification. On social media and TV, a growing number of women are enjoying the status quo, where they can express their views; no longer afraid of the judgmental eye. If she loves money, she's free to share it on Facebook. Similar to the men's conference, many ladies share it as a joke, but sometimes one's truest desire are masqueraded as jokes - more so on social media. Times are tough economically, for both men and women. The woman that desires a rich man, is likely trudging the mud of poverty and unemployment and in search of her financial saviour, albeit “jokingly”.

Observing all of this is the hapless "broke man". He now faces a bigger problem: the pressure of masking his poverty to impress the woman and the loftiness of her financial expectation.

And here's an example:

On a Sunday evening he is watching Date My Family, and the lady describing her ideal suitor seems oblivious to the economic situation of South Africa. At age 25, she expects him to have a car, a decent job and, if he still lives at home, it's a big no-no-no! And the next lady is likely going to echo the same expectations.

Here's how this fuels the desire for most men to flee to their men's conference, leaving children fatherless.

Men tend to alter their behaviour and lifestyle in line with what they suspect is woman's taste. So, he has observed that she wants money and luxury. As I mentioned earlier, he masks his poverty. What she knows about him is that he works and earns a decent salary, and has a car. He takes her shopping and to expensive dates. The affair continues, a child is born. Suddenly the mask hiding his poverty cracks, revealing a man who really couldn't meet the lofty standard she expected. So, he steps out and embarks to the men's conference, possibly for good.

I myself have often found myself seeing no other alternative but to mask my poverty, to impress a woman. And I fear now that I'm en route to the men's conference, to join my father. In relationships I would disappear for a while, with stories that suggest I'm in meetings or business trips. But in reality, I'm on the streets scraping whatever I can to claim my dignity in a country plagued by unemployment.

I never listened to my friend's advice. Instead I pursued a date with a woman, who clearly knew her worth. I was totally reliant on freelance gigs for income. No payment came. So the day before the date I had to text her to postpone the date, due to "budget constraints. I was honest, thinking she'd understand. Well I was wrong. I regretted not lying. I could've told her I was embarking on a top business trip, a business meeting on the 10th floor of some skyscraper; or maybe I should've told her I'm attending a very important conference…