Leeto: A Sam Nhlengethwa Print Retrospective surveys the print work of renowned artist Sam Nhlengethwa from 1978 to 2018. Leeto is a seTswana/seSotho word for ‘journey’ and, as the word suggests, the exhibition explores the ongoing artistic footsteps of Nhlengethwa.

Nhlengethwa began his career in 1976 during one of South Africa’s most tumultuous socio-political eras. In 1978, he completed a two-year diploma at the Evangelical Lutheran Church Art and Craft Centre, Rorkes Drift, Kwa-Zulu Natal, where printmaking was a prominent feature in the Centre’s activities. Nhlengethwa’s work spans a variety of mediums from painting, drawing to collage, some of his works have been translated into tapestries. One of his big cityscape works was translated into a mosaic. In addition to all the afore-mentioned mediums, Nhlengethwa has also produced an impressive and sizeable body of printmaking work. He has collaborated with several South African printmaking studios; namely, The Artists’ Press, Artist Proof Studio, David Krut Print Workshop, LL Editions Fine Art Lithography Studio, MK & Artists Print Workshop, Mo Editions Printmaking Studio and Sguzu Printmaker’s Workshop. Since 1994, he has produced 163 prints in collaboration with The Artists’ Press making it his longest standing and most productive affiliation.

His lithographs, linocuts, etchings, photogravures and screen prints tackle various socio-political and cultural experiences. Thus, Leeto highlights this facet of Nhlengethwa’s artistic practice in which printmaking is mobilised for self-expression, collaborations, artistic and intellectual engagements, and a site for conversations with the broader public.

The underpinning theme of the exhibition is jazz. An early influence in Nhlengethwa’s works was the underground township jazz community; Nhlengethwa’s brother was a jazz musician and he began collecting jazz records at the age of 17. Leeto: A Sam Nhlengethwa Print Retrospective draws links between the fluid nature of jazz improvisation and Nhlengethwa’s study of an ever-changing community. Not only is it a recurrent theme in his work and something that Nhlengethwa loves and is inspired by, but jazz begins to articulate the various possibilities for a deeper understanding and reading of his oeuvre.

Asking the question “What else can Nhlengethwa’s images offer us?” the exhibition presents a collection of Nhlengethwa’s print work to be interrogated, his artistic evolution to be mapped out and his personal aesthetics to be interpreted. 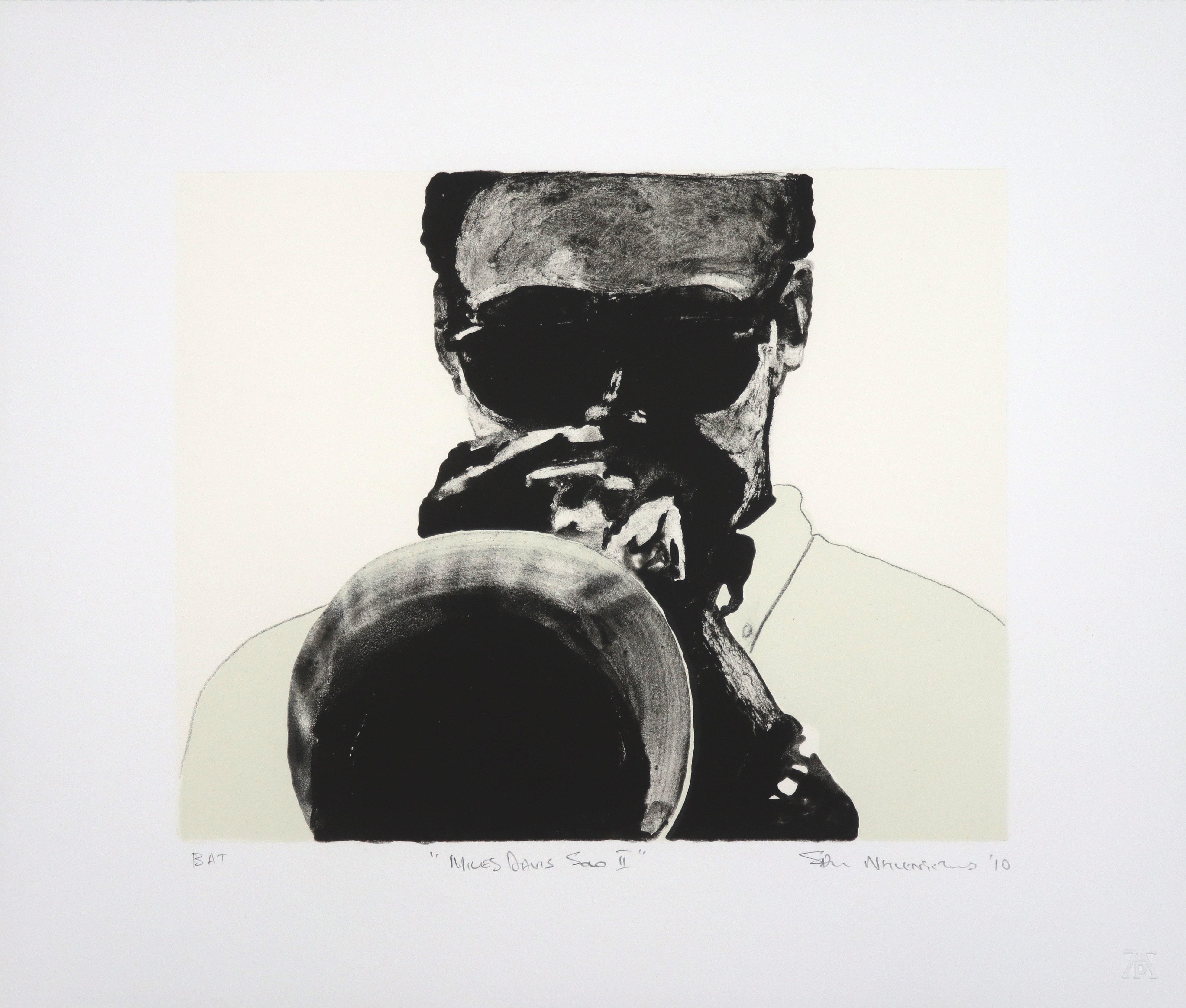 Boitumelo Tlhoaele is a Doctoral Fellow at the Africa Open Institute for Music, Research and Innovation (Stellenbosch University) working on the Hidden Years archive project. She is also an independent curator and a former journalist. Her research interests are exploring the intersections between jazz and art, the music and visual archives within the context of curatorial engagements and practices. She holds an MA in Heritage Studies (University of the Witwatersrand).

Sam Nhlengethwa is one of South Africa’s most celebrated living artists and the recipient of the 1994 Standard Bank Young Artist of the Year. His artworks are included in private and public collections including the Johannesburg Art Gallery, Iziko South African National Gallery and Wits Art Museum, the Standard Bank Art Collection, SABC and JCI Gold South Africa. He has also exhibited extensively internationally including France, Cuba, New York, Japan and an exhibition at the Savannah College of Arts & Design in Georgia (USA) and printing workshops at Germany’s Weltkulturen Museum