MAKHAYA NTINI, 43, has finally opened up about the racism he silently endured in the Proteas in an SABC interview.

It took young Lungi Ngidi’s Black Lives Matter call for the Mdingi Express to open up. Ntini, who broke into the Proteas ranks in 1998 as the “first black player”, stopped playing professional cricket nine years ago. For 22 years, Ntini hid the bleeding wound with a gentleman’s smile. But our Black Consciousness had always convinced us that something was not right with the apparent happiness of Ntini in the national side.

In his Azanian Love Songs, legendary poet Don Mattera protests that “we hide our anguish in song”. 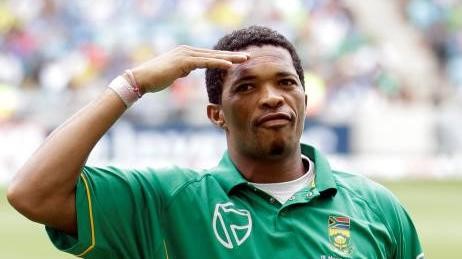 Pay attention that I said Ntini “stopped” playing cricket for the Proteas in 2011. The nation thought he had officially retired. He has now revealed that he was forced to quit after he was dropped after they lost to India. From an A-plus player, he lost everything including his sponsors. He says he watched games and parties being organised for white cricket players on their retirement. Nothing was organised for him despite his colourful service and record for the Proteas.

When he was asked if he ever felt lonely in the national side, he hesitated before he asked the interviewer if she really wanted him to be honest and speak about his situation. He then revealed that he felt lonely and isolated throughout his time with the Proteas. He saw teammates asking each other out for lunch or dinner. Nobody ever asked him out. If he was the first in the dining hall, no white player would join him on the table. From the hotel to the training ground and back to the hotel, he developed a habit of avoiding his teammates by asking the bus driver to keep his kit bag while he would run to the training ground and back to the hotel.

It was clear from the interview that Ntini’s heart is still bleeding from racism.

In the past days former Proteas’ white cricketer Jonty Rhodes, 50, acknowledged the prevalence of racism in the national side following his fellow white former teammates’ attacking of Lungi Ngidi’s BLM's call. I quote Rhodes at length:

“I certainly benefited from the fact that I wasn’t really competing with 50% of the population. I literally was competing only with the white players. You talk about white privilege and it raises a lot of heat and debate on social media but it is the case. I’m very aware of that. My cricketing statistics as a player were very average when I was selected. If I was competing with the rest of the country, then possibly I wouldn't have been picked. And I would not have been diving around the field. “

There you have it. If you thought racism was the thing of the past, think again. Step out of the rainbow illusion and return to real life.