Forward March! Some Key Battles In Azapo’s Quest For Liberation

12 April is an important day in the Black Consciousness Movement (BCM) calendar. Back in 1980, this was the day when the efforts to consolidate and advance the BCM's military efforts initiated way back in the early 1970s in the form of the Azanian People’s Liberation Front (APLF) were realised.

This 2020, AZANLA (Azanian Liberation Army) Day commemoration is one with a difference. It will be the first one without the first and last Secretary for Defense and Operations of the BCMA, Military Supremo Nkutšoeu Skaap Motsau who died in 2019. He finally succumbed to the injuries of a 2005 car accident that rendered him tetraplegic or paralysed from the neck to the toes.

When it was clear that the Kempton Park sell-out settlement had left no space for exiled organisations to pursue their armed missions, the cadres of the BCMA and its military wing AZANLA had to return home to Azania in 1994. A merger of AZAPO and BCMA was concluded at the Merger Congress in October 1994. It was at this Congress that AZANLA officially became a Formation of AZAPO by the political and legal operation of the merger process. A symbolical ritual was performed at the Merger Congress where BCMA Chairperson and AZANLA Commander-in-Chief Mosibudi Mangena handed AZANLA over to AZAPO. The then AZAPO President Itumeleng Mosala received this fighting instrument and political asset of the Azanian Revolution.

Anyway, in principle and by political understanding, BCMA was always AZAPO in Exile. The BCMA name came about only because it was not politically and legally safe for the overtly armed organisation to openly declare its oneness with AZAPO.

No wonder that the product of the merged organisation retained the name AZAPO, while both Mangena and Motsau were elected to lead the merged AZAPO as President and Political Commissar, respectively.

We see no better symbolical way to commemorate AZANLA Day than to recount some of its major battles and operations. We have carefully chosen those that will not put the former Combatants at risk. 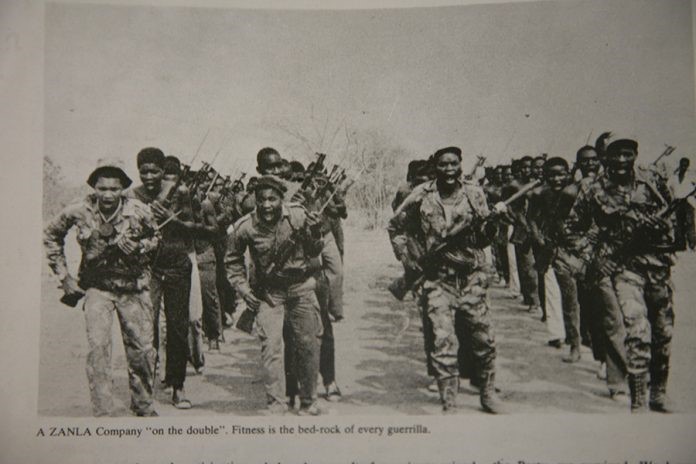 Our first recount starts with the 1990 raid of a Lehurutshe satellite police station by an AZANLA Platoon in the Bantustan of Bophuthatswana. The police station was mounted to protect a reactionary Kgosi Moiloa. The objective of the operation was to confiscate arms. That mission was accomplished with no casualties to the Platoon. That mission, coupled with the one on a citrus farm, resulted in a joint operation by Botswana Defence Force and Bophuthatswana Defence Force ground and air forces to root out AZANLA bases on Botswana’s Lobatse mountains. AZANLA defended its lines. Some of the Combatants who were involved in both military operations were Thabo Xabanisa and Buti Saudi. Mzwandile Mcoseli was only part of the Citrus Farm operation. All three Combatants have since died.

The Botswana government reacted by closing down the BCMA offices and expelling our leadership and cadres.

AZAPO Voice remembers the 1991 Ramatlabama Battle where an AZANLA Unit came under the ambush of the SADF and BDF joint forces. General Commander George Biya and Chief of Logistics Mzwandile Mcoseli fought back in that dark night. Mcoseli was shot in the head as he was moving from one position to another. Biya was finally overwhelmed and arrested. He continued the fight in prison in the form of a hunger strike that lasted almost two months - 57 days to be exact. It is that fight, together with international pressure about the condition of detainees, that led to his and other detainees' release.

We also remember the 1991 Mahwelereng Battle that took place at the AME Church which served as a safe house for an AZANLA Unit that was active in the area. The security of the Combatants was compromised resulting in the two that were there at the time being encircled and ambushed by a joint operation of the apartheid forces of SADF and SAP. AZANLA Combatants Morakenyana Motlolisi and Ronald Malatji stood their ground and kept the enemy forces at bay despite the enemy's superior firepower and numbers. Former police officer Moloko Mafafo described the Mahwelereng Battle as "bloody". It took about six hours. In 1996 he testified at the TRC that he was shot during the battle and got hospitalised for three months, as a result of which he had to take an early pension.

After Malatji fell, and Motlolisi ran out of ammunition, he pretended to surrender. As the excited enemy forces thought they had captured him, he detonated the last hand grenade he had kept and killed himself along with enemy soldiers.

We pause our recount with the role played by AZANLA to support and protect the Cultural Boycott that Paul Simon sought to undermine by visiting our country in 1992 in violation of that political instrument. AZAPO had in the early 1980s dealt with chance-takers like The O'Jays and US Senator Edward Kennedy. The fight against Simon was this time led by AZAPO’s youth wing AZAYO, whose President Thami Mcerwa was the face and mouth of that fight.

An AZANLA Unit, which involved Mcerwa, Stan Sigotyana and two highly trained Combatants, planned the operation to attack and destroy Simon's massive sound equipment kept in a warehouse. Under the command of Mcerwa, two AZANLA operatives destroyed Simon's sound system with hand grenades. Of the four Combatants that were part of the Unit, Mcerwa and Sigotyana have since died, while the other two are still alive. It is with justification that AZANLAMVA has a slogan that proudly says, "We Fought for Liberation". It is against this background that we salute all the battle-hardened Combatants of the AZANLA Forces.

However, here goes a critical political reminder. As required by an Act of Parliament that caters for the welfare of Military Veterans, AZAPO formed AZANLAMVA to coordinate the welfare activities.

As we commemorate AZANLA Day, we take this opportunity to remind all cadres to never see the access to this extremely limited welfare as the end of the liberation struggle. We should hasten to develop our own projects to entrench our self-reliance and safeguard our political independence. The current Act of Parliament can be amended or scrapped any time by those in the majority at the present moment. That would be when the existence of AZANLAMVA, as presently constituted, might be found wanting.

There will be more political meaning to AZANLA, AZANLAMVA and the AZANLA Day if the cadres contributed towards building AZANLA's mother body AZAPO.