You are faced with a tough decision; you get to play God for a short while. Before you is a decision that will affect your childhood and inevitably your whole life.

“Thabo Maswanganyi, do you choose to never have your father present in your life or he is present up until you reach the age of 10? Choose now”

On Saturday the 31st of October 2020, I found myself thinking about what I should not have been thinking about. I was unfortunately in Thabo’s predicament asking myself if I was better off to have not known the unfortunate soul who gets to be called my father or some years with him would have made a difference. Strange considering that this thought came as a result of watching a theatre show called Peeling Shadows.

Now, any other ordinary person at this point thinks the content of the show must have included some form of the stereotypical Black story. Single mother, runaway father, probably killed, you know mos the boring reality of Black lives. However, this was not the case. The story; I still don’t know what it is about. I thought maybe I lacked the sophistication so I asked my fellow attendee, and he is as confused if not more than me.

Now at this point, I implore the show’s program notes for guidance. The synopsis provided goes like:

Peeling Shadows is a play about a detective named Pamela, on a quest to solve an investigation regarding three missing fraudsters. As the case turns cold, she encounters a mysterious young girl Boang wandering the streets alone. Little does Pamela know that Boang may just be the key she needs to crack the case.

After reading this synopsis, I try to reconcile what I have just witnessed with what I am reading. I come to the following conclusion, it is either the story was badly written or the gap between the mind and the actual work was too great.

Now my fellow attendee Hlubi coins some very important words when we discuss this performance posthumously. He says, “hai mchana the story had to adapt to the idea”. Then I realise at this point that there is no story, what we have here is a brilliant idea of staging theatre. A kind of infusion of digital that is not exactly digital. I want to commend the brilliance of the world created by the illustration and the vast possibilities that it provides to the craft. This show will stand as a forerunner in forging a new way of doing theatre, a powerful idea I must concede but it is just that, a powerful idea.

So like the preoccupation I had about my father, this show sets us up for disappointment. It promises to blow your mind and sure the concept does, but if you look at it holistically, you can’t help but scream “go back to rehearsals”.

The danger with these “clever” ideas is that when they work they do and conversely when they flop they do so with pride. So as a person who employs these “clever” ideas you suffer the burden of doing them right otherwise the entire thing falls short. To elaborate, during the performance the one disturbing thing was the transitions on the overhead projector. The director and Illustrator should have invested in smoother transitions and more steady frames. A kind of peel transition could have easily worked, keeping with the title of the show.

The show conceptually would have been a kind of comic book, creating worlds within worlds.

(side note) Investing in an actual fine artist would have assisted the story very well.

What was disturbing is watching a shaking screen, cut frames leaving out crucial information, late transitions, out of sync reactions, and seeing the illustrator struggle through this process. Yes, the illustrator is positioned with the audience, you see him unaware of which frame comes next and having to draw some of the slides. Imagine how intriguing it would be if we didn’t see him but witnessed his contribution?

Now back to that point of the shaking screen, a motif sequence associated with the crying Boang (played by Mosie Mamaregane) was established. Now imagine the confusion created when the illustrator out of human nature of having unsteady hands shakes at any random place, what happens to the meaning of the story?

As if the illustration was not enough, the soundscape just needs revisiting. The balance with the voices is off, the presence is overbearing and when its presence is finally justified in the scene of the gravesite when Boang speaks to her father, it's nowhere to be found. At that particular moment, we needed a music underscore because this is the first and only time as the audience we are allowed to identify with the emotions of the character. 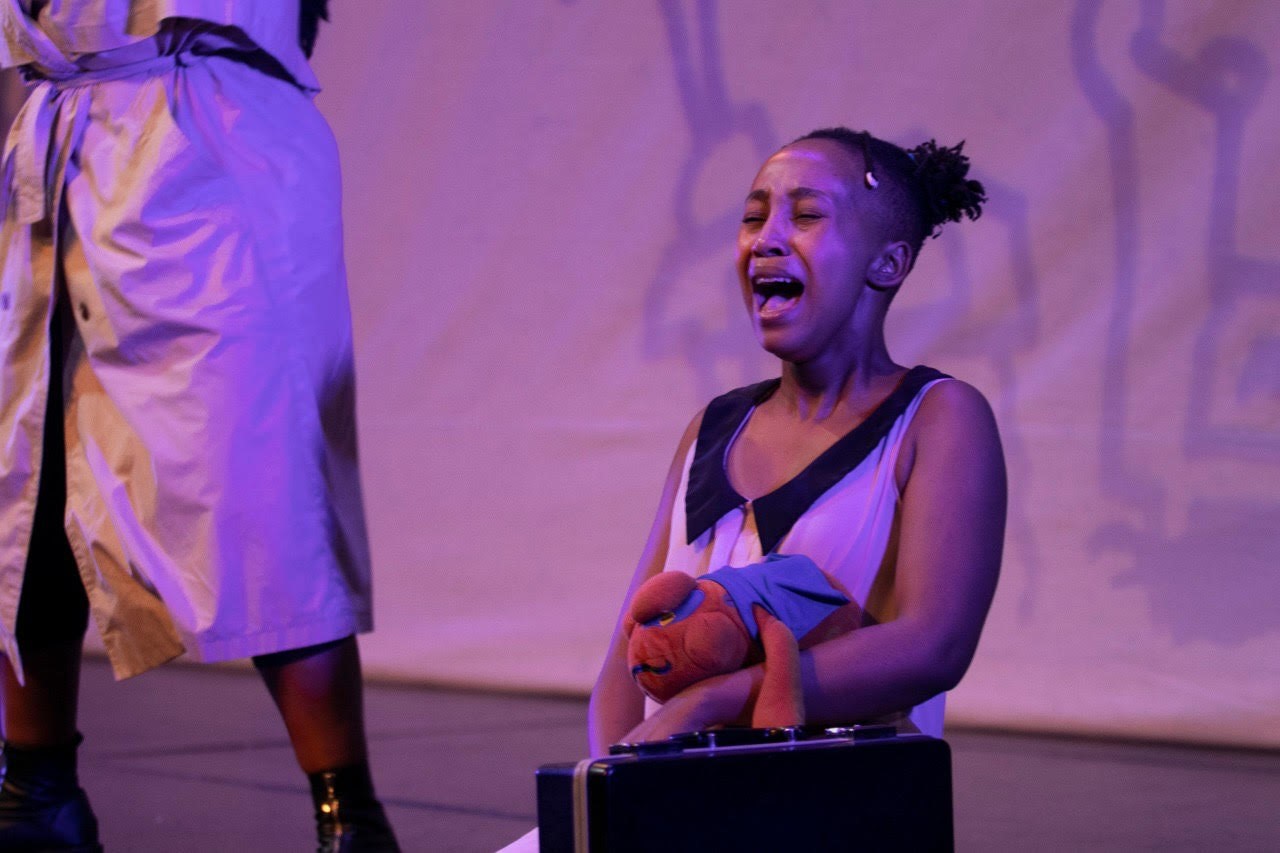 Now to some positives. It is generally a good show. Something to take your 5-year-old little sister to watch, good for people seeking ways to expand the vehicle of theatre. I mean the acting is something worth buying tickets for. With outstanding performances of two particular actors, viz Wonder Ndlovu and Mosie Mamaregane. Not to say that others didn’t perform well, the two just stood out. The direction is decent but innovative.

So like the father that I never got to know, I wish I had never seen this way of staging theatre because it haunts me every day, thinking of what could have been done differently or improved. After all, it is a very exciting and brilliant path that needs much commitment to execution.