REVIEW: Antigone (not quite/ quiet)

Antigone (not quite/ quiet), subtitled Ninganiki Okungcwele Ezinjeni (Give not to dogs, sacred things) can be read as an academic exercise. It is a reimagining of Sophocles’ Antigone that begins as a commentary on the traditional tragic form, moves into the story of a disembodied Antigone, and finally ends with a digital interpretation of S.E.K Mqhayi’s poem Mbambsuhe – Lwaganda’s favourite dog.

Described by the director Prof. Mark Fleishman as a three-part response, or triptych to the Classical tale of Antigone. In Sophocles’ Antigone, Antigone is primarily a device to drive the story forward. The story takes place after the Thebes civil war in which Antigone’s brothers fight on opposing sides of the conflict and are killed in battle. Because Polynices fought against Thebes his body is to remain untouched outside the city gates. Antigone illegally performs the funeral rites for her brother. For her actions she is ordered by the king to be buried alive in a tomb. When the king has a change of heart Antigone is found already hanged in her tomb. 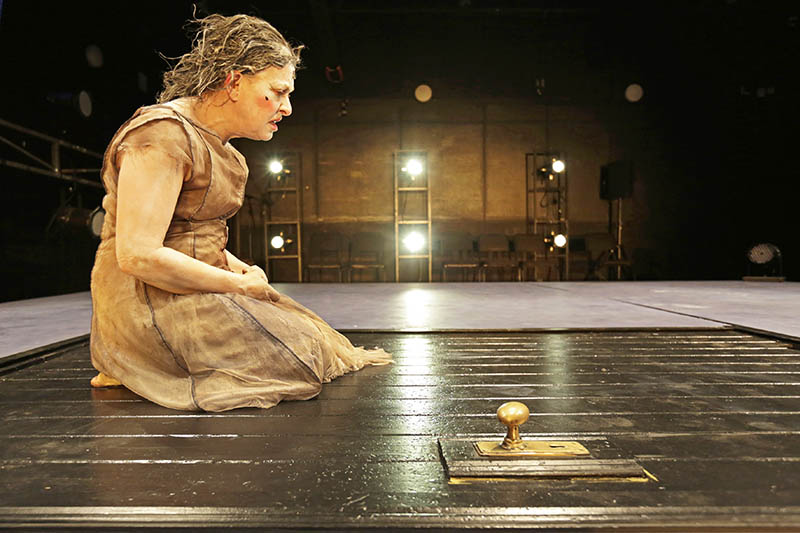 Section one is the story of Ismene, Antigone’s sister, who is played by Jennie Reznek. Historically a marginal figure, here she is the focal point. Reznek’s Ismene is at once a womxn of her time signified by the Greek tragic make-up of a ghost-white face and rosy cheeks, and a womxn forgotten in time. Ismene arrives on stage slightly deranged. Her hair is matted and her once white dress is now grey. She is obsessed with ritual and performativity. The recounting of her narrative begins with her standing in a ballerina pose, her feet in fifth position. Slowly she begins to dance. As she continues, she becomes more and more frustrated with her performance and eventually gives up. “I am charged with remembering, and I will tell it all for you my sister” she says. With the family now deceased she is the only witness to her family’s story, one that she must repeat to any audience she can find. The emotive text, written by Reznek, uses heightened language and comments on contemporary South African issues such as the water crisis, and more pointedly the inconvenience of whiteness. Ismene tells the audience she often hears Antigone from beyond the grave. Her voice a haunting presence over her sister’s life.

The section feels too aware, too clever. Reznek leans into the theatricality, playing up the ways in which white womxn play on sympathy. She performs a kind of victimhood that is rambling with no clear end. This point feels belaboured. Even as the lights fade around her, Ismene refuses to be silent. She taunts the audience in the dark. ISMENE is the longest piece in the triptych, and the section that has been afforded the most consideration in reviews. I would argue that this is partly because this section has the most obvious connections to the Classical text. However, there is an embodied physical language within this production that is erased if not interrogated.

As the lights dim at the end of Part I, Antigone silently walks onto either side of the stage. She is played by a chorus made up of Magnet Theatre’s third year trainees (Sizwe ‘Ginger’ Lubengu, Carlo Daniels, Yvonne Msebenzi, Sivenathi Macibela, Sityhilelo Makupula, Siyavuya Gqumehlo, Luxolo Mboso, and Abigail Mei), and UCT’s Centre for Dance, Theatre, and Performance Studies MA students (Sive Gubangxa, Motlatji Mjamba, Jason Jacobs, Kanya Viljoen, and Balindile ka Ngcobo).

Antigone then steps into her grave. When she opens her mouth to speak it is her own name. It rings out in a discordant harmony. Antigone plays with the pronunciation – ‘Anti-gon, Antee-go-nie, Antigone (said like a triplet). A hand shoots up from the mass which is her body and conducts the voices as they rise, fall and glide. At either side of the stage two microphones stand discreetly capturing the chorus’ voices making for a live vocal loop may be the most dynamic component of the entire piece. The voices take on a life of their own echoing back in the space. Sometimes they are manipulated and distorted providing a rich sonic landscape that is just as interesting as the bodies on stage. The vocal score was composed and arranged by master composer and musician Neo Muyanga.

Antigone echoes the movement of her sister although her plie is one suspended. Incomplete. She stands on her tiptoe. Precariously. Her one hand pointed towards the ceiling. She is at once a ballerina, and a corpse her feet only just touching the floor, her arm the noose. The finger in the air is a noose, is ‘pick me’, is an affirmation, that later in the section is transformed into a pantsula stance. The movement language in this section choreographed by Mboso alongside Jennie Reznek is effortless in its mutability and is one to be applauded.

In one interpretation Part II is typical in its use of Black and Brown bodies in performance spaces. There is but one white body in the chorus. It is not uncommon to think of the chorus as one entity. In this case – Antigone. Audiences are used to Black and Brown performers being the accompaniment to the main star. It is almost expected that bodies of colour, especially when grouped together, can sing and dance with a physical prowess. Read in this way, Reznek’s Ismene is undoubtedly the production’s focal point, with the chorus added for spectacle and entertainment. This is one way this piece should be critiqued, but to leave it there would be uncritical. Part II is not as neatly intellectualised as the first section. It is informed not only by the academy, but from an embodied knowledge. When interviewed for the accompanying RETAGS podcast the cast along with Mandisa Vundla, and Faniswa Yisa (both contributors) stated that tragedy was a part of their lived reality as South Africans. In many ways the second section is the most interesting, most complex, the easiest to identify with, and the most experimental. It can be argued that it centres Blackness as being in the forefront of significant political and creative shifts.

Antigone being played by multiple people is reminiscent of how she is made into symbol, but for who, and to what ends? Part II is driven by a spirit of protest. All bodies that make up Antigone are clothed in long black dresses. In protest it is common for the dead to become the face of the movement. This happened not too long ago across the country where the rape and murder of 19-year old UCT student Uyinene Mrwetyana launched the #AmINext campaign. Womxn, and non-binary folx are all Uyinene, in the same way that the chorus is all Antigone. This reality needs to be held in tandem with the reality of the varied physical, vocal, and emotional expressions of Antigone. A reminder that although certain systemic trajectories are common for marginalised groups, they are still individual people. A good example of this sees Antigone once again standing on either side of the stage. One by one she walks onto the stage and lets out an expression of grief. Jacobs begins with a silent scream reminiscent of Mother Courage. Mjamba walks, turns her back to the audience and almost stumbles into a deep “Yhuuuuu” before her body falls forward and she begins again. Viljoen takes shallow breaths growing more and more hysterical, whereas Macibela stares straight ahead raising one hand to her cheek to hurriedly dry their tears. Another sequence features a powerful exchange between Lubengu and Daniels. The two Magnet trainees are paired beautifully as they echo each other’s words, Daniels in Afrikaans and Lubengu in English. In this exchange the pair contextualise the role of womxn in protecting them, in this case their mothers. Lubengu’s physicality is canine-like, while Daniels moves in a contemporary dance style. Their theatrical partnership has been a pleasure to watch over the past two years as they have often been paired together as seen in Magnet Theatre’s restaging of Dűrenmatt’s The Visit, and the Mandla Mbothwe directed G7: Okwe-Bokhwe.

Vundla wrote the poetic text for ANTIGONE with input from the cast. For his monologue, Jacobs, himself an acclaimed scriptwriter and well-known for his Afrikaans writing, translated and fleshed out two lines of Vundla’s text. Two of the most evocative lines of the play are delivered by Balindile ka Ngcobo, she says “Dreaming while Black is a revolution delayed/ dreaming while Black womxn is a disappearing act”.

ANTIGONE is a tour de force of performance that demands a fluidity of performance that has the cast navigate choral singing, movement sequences, and singular moments that individuate the chorus. Throughout this section Antigone performs exceptional monologues that provide a multifaceted look at the possibilities of who and how Antigone could live.

The third section is named after the blind prophet Tiresias, and is an exploration of the ways we interact with digital media. The idea of a disembodied voice is once again utilised as Tiresias (Faniswa Yisa), recounts a translated tale of Mbambushe. Three monitors project the image of Tiresias as they move from floating head, to mouth, to a head in the process of mitosis. The three monitors also produce a bleak video montage of poverty, ecological destruction, and protest (with footage cut from the #FeesMustFall, #RUReferenceList, and Gender Based Violence marches).

This section although sharp, clean, and polished feels outdated. It could perhaps be read as commentary on apathetic liberalism, embodied by Ismene, or highlight the ways in which marginalised people have put their bodies on the line to affect real structural changes within society. In either scenario a series of projections ignores the physical and interactive ways we now engage with media. Smart phones and laptops now allow people to carry projections around with them. The internet has made digital communication a reality. Why not take the idea of digital communication and explore how it has been used as a tool for mass mobilisation. The immediacy and aliveness of this section softened the impact that it could have had had it dared to imagine the digital space as something that was malleable rather than portray it is a mere projection.

Antigone (not quite/ quiet) is a masterful statement that interrogates the roots of Sophocles’ Antigone while drawing parallels and inserting South African references. The piece is brought together beautifully through the set and costume designs of Craig Leo, choreography contributions by Ina Wichterich, and videography by Kirsti Cummings. But it is also a production that could go further in challenging the way in which audiences view and interpret performance and more specifically the bodies of the performers. Ultimately it is a production that interrogates our relationship to tradition, especially that which is not ours, and forges a collaborative interpretation of a single story. Antigone (not quite/ quiet) is a production still in the process of becoming. In the next five years it will be interesting to see how RETAGS chooses to see in and what other ways this active research will unfold on stage.

1
REVIEW: Antigone (not quite/ quiet)

Isphithiphithi: From The Soil To The Sky