Her first Jozi date (31st May, Untitled Basement) is part of a broader tour which includes her first show at home in Lusaka, a headline spot at MTN Bushfire Festival in Swaziland, Dark MOFO in Australia, Glastonbury in the UK, Down the Rabbit Hole in The Netherlands, Hip-Hop Collection in France and her USA debut at BRIC Celebrate Brooklyn Festival with Burna Boy.

Sampa the Great has a penchant for poetry and weaves lyrical mazes with her verses, drawing listeners into a lush, imaginative world. Her music bonds from spoken-word to rap, with stops at psychedelic and blues along the way; it’s the sound of an adventurous young mind pushing out against all boundaries. Born in Zambia, she was then raised in Botswana. Music was immersed within her family life and at the age of 22, Sampa left home and moved to Australia to further her musical studies.

Her debut project, The Great Mixtape introduced Sampa the Great to audiences, giving them their first taste of what she was about. Produced by Sydney based musician Godriguez, The Great Mixtape was about making one's presence known, making your dreams become a reality and believing in yourself no matter who you are and where you come from. Since this initial release, she has collaborated with artists like REMI, Hiatus Kaiyote, Estelle and has supported Kendrick Lamar and Thundercat.

Following her first European headline tour and supporting Joey Bada$$ on his All Amerikkkan Bada$$ tour, Sampa the Great released her second album Birds and The BEE9 with Ninja Tune’s sister label Big Dada. It garnered attention from Gilles Peterson (BBC6), Annie Mac (Radio 1), Clash, The Guardian, Rolling Stone, triple j, and landing coveted feature album spots across community radio stations across the board, it’s no wonder Sampa The Great was awarded with the Australian Music Prize award for 2017.

In her endeavours, Sampa the Great continues to strive to always be the best she can be; with promise of more music, poetry and avenues of expression always around the corner.

“Her stage presence is unassuming but effortlessly charismatic. She beats her chest a little with a fist as the crowd roars, after a superhuman run of rapid-fire bars that pushes past where most mortals would need a breath….” – Guardian: Sampa the great live review“ Sampa The Great’s captivating fusion of soul, jazz and hip-hop is what makes this album so inspiring and original, and marks her as one of the most exciting talents emerging at the moment.” – London in Stereo

SAMPA THE GREAT – BIRDS AND THE BEE9 // ALBUM REVIEW

“Originating from Zambia, the Melbourne-based poet and singer-songwriter is a force to be reckoned with. Not only is she a brooding soulful, hip hop genius who redefines typical rap music, but she is also a powerful commentator, using her words to effect positive change.” – AU Review

“An adventurous young mind pushing out against all boundaries” – OKAY AFRICA 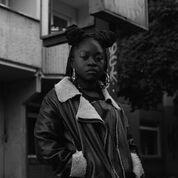