Joburg Selected, a new body of work by Sam Nhlengethwa, takes the artist’s relationship to the city’s built environment as its source of inspiration.

Nhlengethwa was born in Springs in 1955 and grew up in the Ratanda location in Heidelberg, east of Johannesburg. Despite living outside of the city to this day, Nhlengethwa has spent much of his life working in and around Joburg, occupying a workspace at the Bag Factory in Fordsburg for 25 years and more recently, a studio at August House in Doornfontein. With this new series, Nhlengethwa reflects on the sights and sounds he’s absorbed during this period, zeroing in on a series of buildings and places which for one reason or another occupy a place in his impression of the city.

The human figures, typical of Nhlengethwa’s paintings and collage, are largely absent from this body of work. Instead, Joburg Selected is populated with a different cast of characters including the Market Theatre, Constitution Hill and Ponte City among others.

“They have their own stories and relate to our history in various ways.”

By choosing to depict these specific sites Nhlengethwa views this work as an archive of the city and record of certain buildings that may not exist in the future. “When you look at what photographers like David Goldblatt did in the past, some of those structures no longer exist, but they’re on record. It’s about memory, more than just architecture”.

In addition to mixed media works on canvas, Joburg Selected features lithographic prints. Popular night spots such as Kitcheners and the now- defunct The Orbit are depicted in these scenes, “to remind people that we used to listen to good sounds there”. Another large work brings together several of the city’s iconic high rises into a made-up mise en scene and is titled, I Love Jozi, which for Nhlengethwa about “sums it up”. 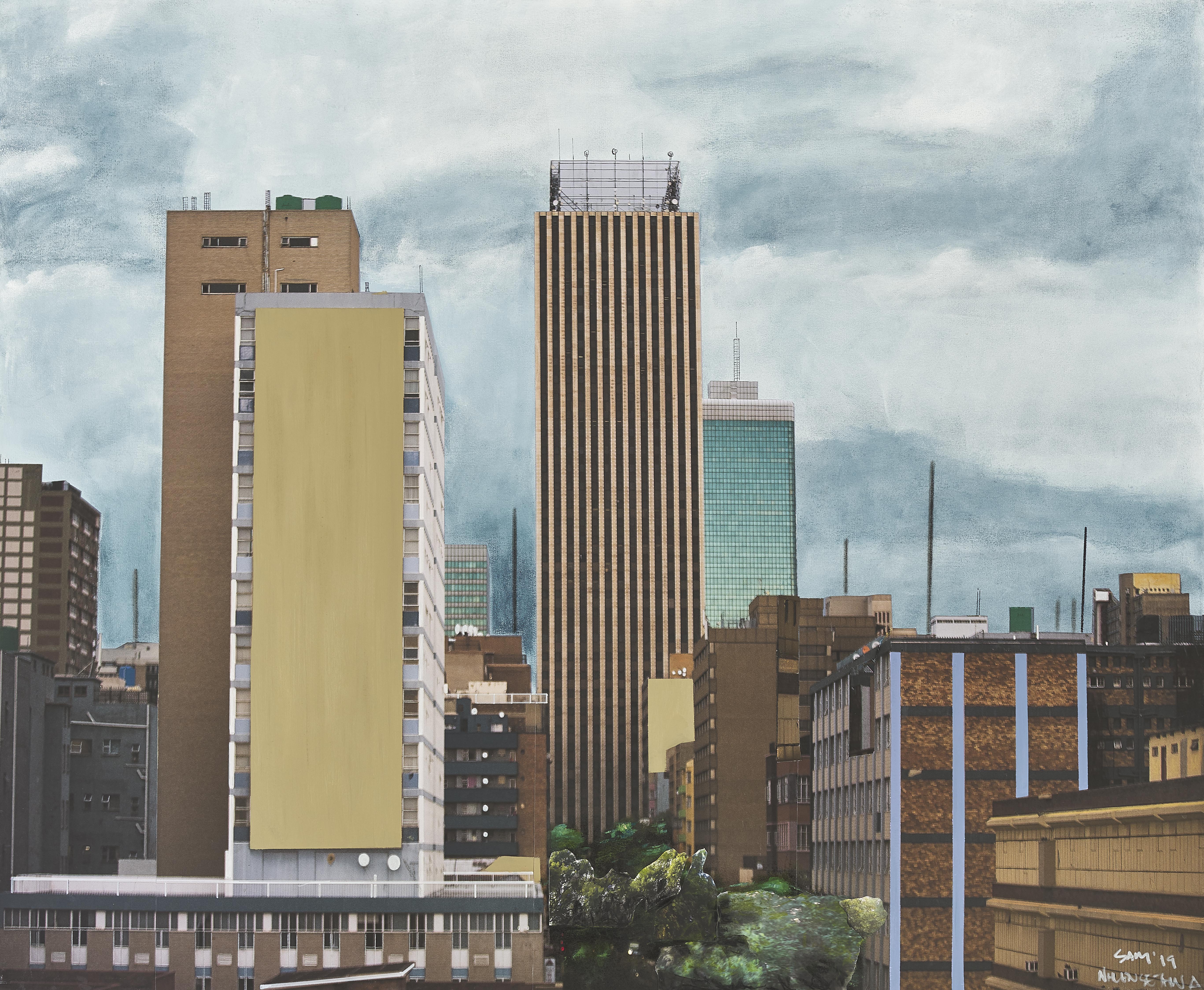 Sam Nhlengethwa was born in the mining community of Payneville Springs in 1955 and grew up in Ratanda location in Heidelberg, east of Johannesburg.

He completed a two-year Fine Art Diploma at the Rorkes Drift Art Centre in the late 1970s. While he exhibited extensively both locally and abroad during the 1980s and ’90s, Nhlengethwa’s travelling solo show South Africa, Yesterday, Today and Tomorrow in 1993 established him at the vanguard of critical consciousness in South Africa and he went on to win the Standard Bank Young Artist Award in 1994.

Nhlengethwa was born into a family of jazz lovers; his two brothers both collected jazz music and his deceased eldest brother was a jazz musician. “Painting jazz pieces is an avenue or outlet for expressing my love for the music,” he once said in an interview. “As I paint, I listen to jazz and visualise the performance. Jazz performers improvise within the conventions of their chosen styles. In an ensemble, for example, there are vocal styles that include freedom of vocal colour, call-and-response patterns and rhythmic complexities played by different members. Painting jazz allows me to literally put colour onto these vocal colours.

“Jazz is rhythmic and it emphasises interpretation rather than composition. There are deliberate tonal distortions that contribute to its uniqueness. My jazz collages, with their distorted patterns, attempt to communicate all of this. As a collagist and painter, fortunately, the technique allows me this freedom of expression… What I am doing is not new though, as there are other artists before me who painted jazz pieces. For example, Gerard Sekoto, Romare Bearden and Henri Matisse.”

Nhlengethwa’s work has been included in key exhibitions such as Seven Stories About Modern Art in Africa at the Whitechapel Gallery in London and major publications such as Phaidon’s The 20th Century Art Book. He has had several solo shows in South Africa and abroad, exhibiting in the 12th International Cairo Biennale (2010) and in Constructions: Contemporary

Art from South Africa at Museu de Arte Contemporanea de Niteroi (2011) in Brazil. In 2018 Nhlengethwa was included on the group exhibition Beyond Borders: Global Africa at the University of Michigan Museum of Art. Most recently Nhlengethwa was the subject of a print retrospective, titled Leeto, at the Wits Art Museum, which was accompanied by the launch of a catalogue of the same name.