Who No Know Go Know: On Fela And His Humanity

Blackness as a state of being exists relatively on the periphery. It is a form that is almost always expected to relent and equivocate even when its comforts are disrupted. We are, almost always, located far from all the comforts and perks of this life: money, free will, good health and heroes. So, for all our pains and persecutions we comfort ourselves by making art. In the rhythms of Fela Kuti and Miriam Makeba we find the missing pieces of our hearts, the ones that have often burned through our eyes and stained the heavy-laden sheets that we lay our heads on.

We are a people and our humanity is in the words of the heroes we uplift, the ones who are unafraid to fight the power in the rhythmic vibrations of their creations. One such person is Nigerian legend Fela Kuti: the Afrobeat pioneer and political firebrand who spent much of his life signing in the language of our pain. Fela made noise, the kind of radical noise that awakened his people to the betrayal of the place we call home, the kind of noise that attracted police raids and the unwanted authorities who were, almost always, the subject of this noise. With hits like Mr. Follow Follow and Who no know go know, Fela taught us to embrace the mystical parts of our being while we question those who erase our humanity in the name of politics and perhaps it is for this reason that he is still revered to this day.

Fela was once boy, running around the streets of the South-western region of Abeokuta, Nigeria. He then became man, musician and finally the legend. One wonders how this revered state of being takes away the humanity of the beloved heroes of this continent. It is perhaps possible, that when we put people on high pedestals, we make it harder to see their humanity in all its fullness, that we take away the sacred chance of celebrating their peaks while embracing their pitfalls. Fela was a flawed man, in many respects he was not one who adhered to the boundaries and demarcations set out by society and thus in his inability to fit in his art was more meaningful. On a continent like Africa, where heroes are few and far between, men like Fela, even in death, are burdened with the dreams of a people who have endured oppression and have inherited trauma as their ever-constant reality.

It is with this in mind that one wonders if we should take a moment to acknowledge the flawed nature of the human being while we celebrate the brilliance of the artist. Conversations about the ways in which we’ve overlooked Fela’s misogyny do not erase the fact that Kuti was as controversial as his music and that he was fearless, outspoken and used his music to oppose the corrupt reality which is prevalent in Nigeria and the rest of Africa. But overlooking the parts of his humanity that were imperfect also removes the one and only fact that should be first and foremost, which is that he was human and thus was as flawed as we all were, and by talking openly about these pitfalls will allow us to see the parts of ourselves that are equally imperfect while Fela’s music becomes the soundtrack to our journey to self-correction. 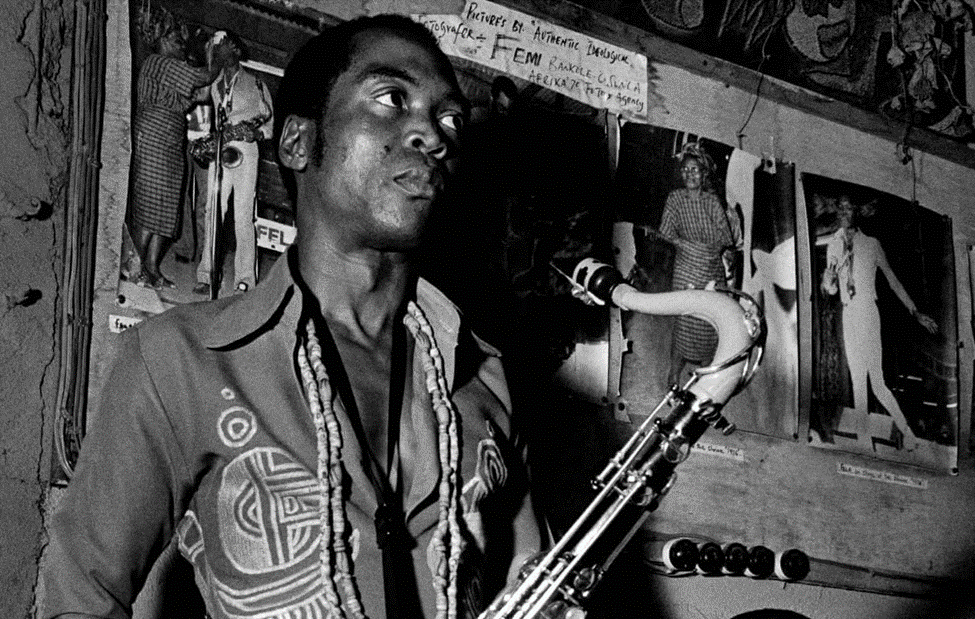 It is often said of Fela, that he was a chaotic firestorm who loved humanity and perhaps there is a slight injustice in the way his artistry meant that his humanity was erased because it was not picture perfect. In the age of outspoken and fearless political engagement, it is perhaps necessary that we embrace the fullness of Fela’s being as with any other hero.

While the oppressive forces that Fela fought in his music continue to live on and function fully to this day, the kind of fearless artist is also necessary for the benefit and progress of our people. In the story of Fela Kuti’s life: a Yoruba man who mesmerised and enchanted the world with the fiery flames of rage that he poured into his music, we learn that there is greatness in our imperfection and that the fuel we need to be better for our people is love for humanity. Though we are thankful that Fela is the kind of hero whose voice we can continue to listen to, we give thanks for the many young people who continue the fight, in the Back-Beats and Block Chords of their rhythmic story telling we find the parts of ourselves that go missing when our Blackness is weaponised against us. In the week leading up to Felanation, may we find it in ourselves to see humanity and the world in all its vivid colours, may we be moved by the music that transcends time and place and work harder to achieve the unity among Africans that formed a great deal of Fela’s dreams.

1
Requiem for the Place That Made Us
2
Boundaries & Demarcations: On Land and Humanity
3
Taxi Etiquette: The Millennial’s Guide to Working Class Transit