“Dear apartheid apologists, your time is over. You will not rule again. We don’t fear you. Finally, the Land Is Ours” - Mama Zindziswa Mandela

Like many members of the Afrikan Race, I am still digesting the shock and pain of the news of your sudden departure. I suspect our Warrior Ancestors prepared a fitting welcome for you.

As you read this, you may be wondering: who I am and why have I decided to write this letter to you. Well, there are a number of reasons for my decision to write to you.

MaDlomo, as I write to you, we as the Afrikans who reside in the European-criminal-colony referred to as South AfriKKKa, are in the grip of all manner of trauma and confusion.

We have just heard from one of our most celebrated Afrikan athletes uBhut'Makhaya Ntini telling us how he was viciously castrated (metaphorically speaking), by whiteness. Even though he gave his all and like many Afrikan athletes, brought glory to an overwhelmingly white-male-dominated cricket institution, they still rudely reminded him that he was just another kaffir.

Just before that, we saw how the municipal police in what the European invaders call Cape Town, brutally and publicly humiliated a naked young Black man by the name of Bhut' Bulelani Qolani.

Just before this, we learned of the deaths of many Black people (mainly men), who were killed by the various security organs of the state, during the Lockdown. The most prominent case being that of Bhut'Collins Khosa.

Just before this, we saw how in the very first month of the Corona induced Lockdown, huge armies of Afrikan people were standing in long queues, hoping and praying that they too would grab the illusive food parcel.

Then of course there was the story of the public lynching of Brother George Floyd (by a European invader) in another European-criminal colony referred to as the United States of AmeriKKKa.

As you know, his death triggered a global response under the auspices of the slogans 'Black Lives Matter' and 'I Can't Breathe'. We even saw pro George Floyd protests in South AfriKKKa.

This was particularly ironic because the police have been and continue to kill Black people in South AfriKKKa and I don't remember a national uproar in this regard, with the exception of course of the anti-police brutality protests of movements like Abahlali BaseMjondolo.

MaDlomo I am aware you know of most of these moments of targeted anti-Afrikan violence that I have mentioned here. So why am I telling you things you already know?

Well, I tell you these things for a number reasons. Firstly, it is to state the obvious which is: we as Afrikans remain the undeserving recipients of the scorn and unprovoked violence of Europeans and other non Afrikans.

Secondly, I tell you all this to remind us how we Afrikans remain a weak and defenceless race that even tolerates being humiliated by Europeans and other non Afrikans, on the very soil we call the land of our Ancestors.

I tell you all this to remind you how even your own 'comrades' are complicit in the Anglo-AmeriKKKan neo colonial project that continues to undermine whatever we as Afrikans seek to do to attain the sacred goal of total independence.

I am telling you all of this MaDlomo, to remind you of how many of your own 'comrades' would prefer that we don't openly talk about the fact that, as the Reverend Akhona Gxamza once remonstrated “We can’t be scrap metal collectors in the land of our birth”.

We watched with utter disgust at how your own ‘comrades’ chose the option of ‘strategic silence’ when organisations of the European invaders and land thieves like Afriforum and other individual Europeans, viciously maligned your person.

Something they continue to do even now that you have departed. The silence of your ‘comrades’ when you received death threats from such trash as Steve Hofmeyr. Did Hofmeyr suffer any consequences?

To be honest with you MaDlomo, some of us were not surprised that some of your own ‘comrades’ left you to be publicly lynched by European invaders. Is this not the same thing they did to your mother, MaNgutyana Mama Nomzamo Madikizela-Mandela?

Over the years, ‘strategic silence’ has become the raison de'tre of your ‘comrades’ and this should help all thinking and unapologetic Afrikans to understand why it is we continue to be “scrap metal collectors in the land of our birth”.

While the fact of our colonisation, invasion and dispossession by the Europeans cannot be denied or erased, the added tragedy of our situation as Afrikans is that, many of the people who are today revered as ‘our leaders’, are actually a compradorial coterie.

A small but powerful Afrikan elite whose role is to enable the various foreign nefarious schemes that are aimed at one thing and one thing only: the complete capture of Afrika’s various resources and keeping Afrikans hopelessly and eternally dependent on non-Afrikans, for almost everything.

This, in my view, is the foreign imperialist project that viewed both you and your mother, MaNgutyana, as threats that needed to be demonised and ultimately destroyed. And you know better than most what the apartheid security branch did to your mother in this respect.

It is this project of foreign invasion and capture that ignited wave after wave of rebellion and wars of liberation, by various generations of our Warrior Ancestors. A resistance heritage of uncompromising fearlessness and truthfulness. 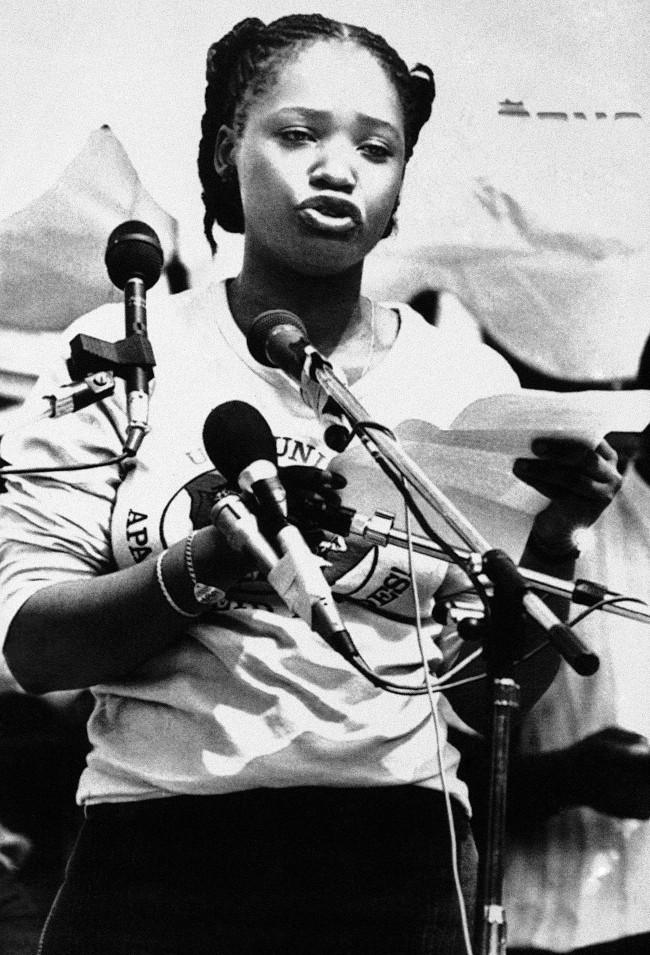 A resistance heritage that was not just palpable in the tone of MaNgutyana’s voice, but also in the tone of your voice. It is for this reason why it was extremely difficult for you to adopt the posture of ‘strategic silence’, when others around you found it convenient to do so.

Like the Warrior Queens Yaa Asantewaa, Yoko and Nzinga, you realised that the invaders had succeeded in intimidating even the most ‘powerful’ among your people, into a state of debilitating cowardice, you then decided to break with ‘protocol’.

You decided to call the enemies of our Ancestors by their names and confronted them directly. You chose to wake your people up - instead of lulling them to sleep. You didn't choose convenience and popularity.

You chose inconvenience and unpopularity. And did so for one reason and one reason only: your undying love for your people, the Afrikan people.

Dear MaDlomo, as you prepare to cross to the other side of the river, you can be safe in the knowledge that, of you it shall be said: she was not just a daughter of the soil, but she was one of Afrika’s Warrior Queens, who took the punches and kicks of the enemies of our Ancestors with majestic grace.

But mostly importantly, she was not the kind of Afrikan who turned the other cheek or begged for the love, praise or validation of the enemies of our Ancestors. No! No! She punched and kicked back. Why was this her demeanour?

This was her demeanour because she knew who she was. She was a descendant of a people who didn’t just have the longest resistance history of any race, but also a people who had produced a plethora of fearless Warrior Queens. This is who she was.

1
A Letter to Mkhulu Mangaliso Sobukwe
2
Blackness As A Permanent State of Nervousness
3
Diego Garcia: A Story Of Untold Black Erasure