The title of this reflection is inspired by a question that was asked by an elderly Black farm worker, uBab'uSomnandi Hadebe at a recent public meeting in KZN.

The meeting was convened by the minister of police (uNdosi, uBab'uBheki Cele) after the death of a white farmer in the Newcastle area.

In his preceding statements, uBab’uHabede also made the point that, the government is aware that the problem in South AfriKKKa is white people, but each time they have to address the problem head on, they instead choose to set up one committee after another.

This is why uBab’uHadebe’s words resonated with so many of us and quickly went viral. His fearless words were embraced by many young Black people, especially on social media platforms.

Black people in South AfriKKKa would rather speak in general terms about the problems facing them and they would attribute them to some mysterious social factors, and not white people.

The fear to confront white people is something that grips Black people regardless of social status. In fact, it seems the more powerful the Black person, the greater the fear of white people. 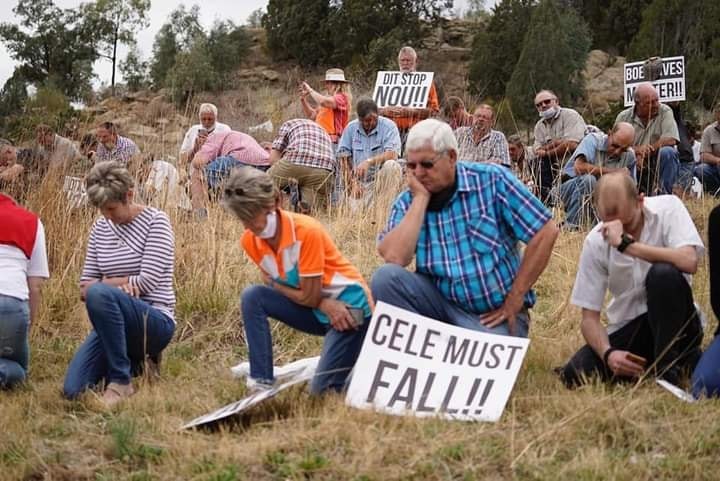 Over the years, we have seen how many of the Black political leaders we revere, have always sought to make sure that, in whatever they say in public platforms, they must do their best not to offend white people or white feelings.

And sometimes, they would go to the extent of even publicly condemning those Black people who confront white arrogance head on, and even go as far as to assure white people that such Black people don't speak for all Black people. Cabanga!

For instance, when having to confront the phenomenon of the killing of Black people in the United States of AmeriKKKa by the police, former president Obama attributed this to poor gun control laws-as opposed to the anti-black foundations of AmeriKKKa.

It had to take someone like Noami Osaka, who is half Obama’s age and in a less powerful position, to raise the issue of the killing of Black people by the police in AmeriKKKa, with more honesty and fearlessness.

In South AfriKKKa, we also saw how revered Black leaders like uMkhulu uNelson Mandela and uMkhulu uDesmond Tutu, dedicated an inordinate amount of their time to assuaging the fears of white people in South AfriKKKa.

Following in their footsteps, we saw how the revered Prof. Thuli Madonsela came to the defence of the retail chain store Clicks, during the recent uproar over their anti-black hair advertisement.

Then last week, a group of heavily armed white people stormed a court building in Senekal in the Free State, and in the process, discharged their fire arms, damaged state property (including a police vehicle that the police often use against Black people).

Then to crown it all, they overturned and burned a police vehicle and stood triumphantly on the overturned vehicle and took selfies. These scenes were reminiscent of those when the AWB stormed the World Trade Centre, during the CODESA talks in the 90s.

Can you imagine Black people in South AfriKKKa doing this and what the reaction of the police would have been? Where does a foreign minority get the guts to do all this?.

These white people who stormed the Senekal magistrates court long came to the same conclusion as uBab’uHadebe, that, we as Black people in South AfriKKKa (together with our Black leaders), are simply afraid of white people.

Re tshaba makgoa! Sisab’abelungu! What other explanation is there for the behaviour of Black police officers or Black political leaders towards white people, except for what uBab’uHadebe so eloquently said in that meeting in KZN?

In trying to understand the reaction of the police in the Senekal incident, Black people have legitimately drawn comparisons between how the police generally react to Black protest and white protest in South AfriKKKa.

They cited the brutal reaction of the police towards the protests of Black people in Marikana or during the #FeesMustFall moment. But remember also, not so long ago, white farmers closed some of the national roads, protesting against farm murders.

How did the police react to this? Not a single bullet was fired. Instead the police tried to persuade them to disperse. Then there were the protests by Black taxi operators, who also blocked some of the national roads.

How did the police react to this protest? They sprayed them with bullets. The police reacted with the same brutality towards the protest by Black artists in KZN.

Both the Black taxi operators and Black artists were not armed or threatening the lives of the police, but this didn’t stop the police from brutalising them. Why is this the case?

The police officers that are often sent to respond to a protest, are in the majority of cases Black police officers. Their often brutal reaction to Black protesters, comes from the fact that they themselves are products of a racist and anti-black society.

And therefore they too are not immune to the deadly self-hate tendencies that generally afflict Black people in South AfriKKKa.

Equally important is the need for Black people in South AfriKKKa to understand that, just like in the United States of AmeriKKKa, the notion of the police has its genesis in the protection of white property and white life.

The police therefore have their roots in the institution of slavery and this is why the baton, the dog and the brutalisation of Black people continues to be a defining feature of modern policing in South AfriKKKa or AmeriKKKa.

At the heart of the brutal reaction of the police towards Black protest in South AfriKKKa and their soft and calculated reaction towards white people, is uBab’uHabede's question: sibesabani abelungu?

Unless we as Black people in South AfriKKKa honestly confront our fear of white people and our chronic nervousness on Black-white matters-we will continue to be the permanent complainants and live like rats in the land of our Ancestors.

But for me, there is a bigger issue that must worry us deeply as Black people in South AfriKKKa and this is the role that groups like Afriforum are playing in mobilising white people and consolidating white power.

In their project to consolidate white power in South AfriKKKa, Afriforum is not only openly defending white power, but it has also gone as far as securing support for their white supremacist project in Australia, the US and more recently, the United Nations.

So, beyond posting, tweeting and complaining on radio talk shows and WhatsApp groups, about what Afriforum and other white groups are doing, what meaningful planning, mobilisation and organisation are we as Black people doing?

Kahle! kahle! what is our agenda thina bantu abamnyama? Do we even have a group agenda? Or are we too trapped in the shisanyama culture and the Jerusalem dance moves for us to realise the danger that is facing us as Black people in South AfriKKKa?