As a Black feminist activist, I cannot help but be grateful for the little mercies that the Black Goddesses bestow unto our nation in Pumla Sparrow et al. Although it might seem odd to write about that vile white woman as a mercy, I think that white people’s public outbursts of racial hatred forces the South African public to face a dirty family secret: The Rainbow Nation.

Our dishonest elders, through years of calculated propaganda dispersed mainly through the SABC and the appropriation of the South African struggle narrative, have managed to persuade South Africans that a white settler minority can co-exist with the citizens of this country. How can perpetrators of crimes and the victims of dehumanization co-exist under a peaceful just society? People like Pumla Sparrow serve as a reminder that in the psyche of white people, Black South Africans are dirty animals who are an inconvenience to them the civilized rational humans of South Africa.

And why shouldn’t Pumla be entitled to this opinion if she lives in a country where as a white settler minority who has benefitted from the pillaging and murders of her grandfathers? And she is protected by a Black government? Why the hell shouldn’t she if her underwear is washed, her dirty sheets cleaned, her food cooked and her streets swept by Black people? 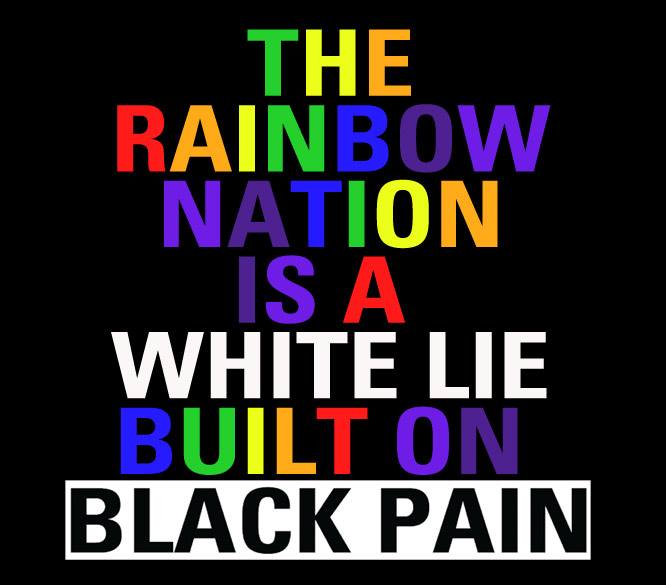 If Pumla lived in an African country (unlike the current white colony currently known as South Africa) with a pro-Black government that was serious about reparations and citizens who truly felt ownership to their country, we would not have a problem with white people and their micro aggressions. I say micro aggression and not racism because a white person calling you a monkey is not racism. Racism is a complex system of exclusion, dehumanization and control exercised by white people over the economy, education and other structures of society. Her calling Black people monkeys is a result of her economic, psychological and cultural dominance over Black people. No land, no micro aggressions.

But I maintain that the likes of Pumla Sparrow and Jongi van Vuuren remain our blessing. We sit back and watch while their vile aggressions assert to the majority of Black people that we live in a ticking bomb. Yes, there remains a lot of work needed to be done in order to decolonize the minds of our people from years of white supremacist brainwashing and the subsequent propaganda of the ANC. The difference is that now we don’t have to convince Black people that white people are entitled and hateful human beings. They are refugees who parade stolen resources to the poor Black masses who were relegated to concentration camps (townships) on the outskirts of the city under Apartheid. Matter fact, if Pumla was not so arrogant, she would know that her post was invoking a conversation about Group Areas Act and how Black people were forcefully removed so that she can live near the beach front. She would know that her whole world is a racist architectural project that started in 1652. This is how white arrogance becomes a blessing. We are then able to contextualize and problematize her whiteness using her very own words. And as young people we have a message for her, we don’t care if you call us monkeys just tell your friends we are coming for the land.