In the longest running trademark case —in the history of South Africa, 19 years to date, the acting judge Keightely, in Johannesburg High Court, refuses to grant Bra Mike leave to appeal a contempt of court judgement.

It’s 2015, beginning February. The owner of intellectual property called The Apartheid Museum, Michael Arnold Stainbank, affectionately known as Bra Mike, is summonsed to court. The court wants to hear why he will not retract his statement. He has put out, on a number of occasions when he educates on racism, that: the directors of the museum opposite Gold Reef City Casino, among whom it is counted one George Bizos, Ruel Khoza, John Kani and Sol Krok (pictured with Mandela here) are racist. He adds that they are also fraudsters, for dispossessing him his intellectual labour — the trademark that goes by the formulation The Apartheid Museum.

Taking their complaints to court, the court requests that Bra Mike apologizes. Well, George Bizos and them, argue that it’s on character defamation grounds that they want Bra Mike’s apology. Bra Mike refuses. Then, because the demand to apologize was a court order, the court finds Bra Mike’s refusal in contempt of a court order. Even with this knowledge, Bra Mike continues to say ‘apology for what... over my dead body’. Bra Mike has put it on record that he will never apologize for calling violent racists, tricksters, and fraudsters what they are, racist.

Bra Mike stands by the company act of 1973 that, in law, you cannot incorporate a company with the names of a trademarked property whilst that trademark is of full force on the registrar of companies.

This is indeed what happened to Bra Mike: very powerful white peoples, because they had even more powerful people in government, huddled together and decided to flout this law. On the version of the Kroks, the skin-lightening billionaires that Bra Mike is in litigation with, since 2001, they say: we did this — effectively stealing Bra Mike’s property— with the blessing of people in government (that is, the ANC). This spells out that, incorporating a company using names of a trademark without the permission of the holder of that trademark was not done legally. Rather it was done through political connections. It was done through floundering the law. And it was done through cadre deployment. That’s the background of the case where, acting Judge Keightely, finds Bra Mike in contempt of court. She proceeds to sentence him to a jail term of three months in prison.

Ironically, today, five years later, though Bra Mike has not retracted his statement (supposedly, defamatory to the characters of George Bozos and others) as ordered by the court, and, add to that the fact that: to date, he has not apologized to the court for not obeying its order — hence a warrant of arrest dangles like a club over his cheeky-kaffir head, in all of that, not one officer of the law has had the balls to enforce the warrant of his arrest. Interesting.

Back to acting judge Keightely’s court.

Though acting judge Keightely concedes that her judgement draws from same assumption of the order, and may perhaps be inheriting premises based on erroneous facts (that there does not exist a legally incorporated juristic person in the company of the Kroks who are in litigation with Bra Mike), she insists: she has reached a correct judgement. Worse, she says: just because there may be erroneous facts in the order that doesn’t mean she has reached an erroneous judgement. Interesting logic, to be precise, it’s an interesting parachuted generality that has no place in the facts of this case. In fact, the acting Judge’s logic here, is not too far off from a referee who issues a yellow card to a twelfth player on the soccer pitch. It’s an overkill to state the obvious, but it begs over labouring: the twelfth player has no place being there in the first place. The same goes to a company that is not a juristic person in law, such a company cannot sue or be sued— yet here, more than 25 judgements in 19 years have been passed in its favour.

The acting Judge narrows everything down to this position she takes: there exists a court order, (though it may be unjust and founded on incorrect facts. This is a dubious premise that she, herself, does not deny — a premise in error, inherited from the court order. She uses this inherited error to come to her judgment).

She insists: the court order has been breached and therefore Bra Mike is in contempt!

She insists: another court will not come to a different conclusion.

She disregards that given a solid ground of a floundered statute her own findings will be suspect. The acting judge denies that there is a cause to feel unjustly dealt with by her findings. It’s ironic though, because her findings are not without contingency and conditions. By her own standard — that is, the law she administers — she must give Bra Mike the benefit of doubt to build a counter argument, that is: before she can say, lack of apology indeed equals contempt of court.

The conditions to counter Keightely’s conclusion — that Bra Mike is in contempt— are that:

Bra Mike didn't act wilfully and with mal-intention. This is the condition upon which a breach of court order is founded.

And it is our view, as Blackhouse Kollective, that: this is consistent not only with racism but wilful fraud and corruption. 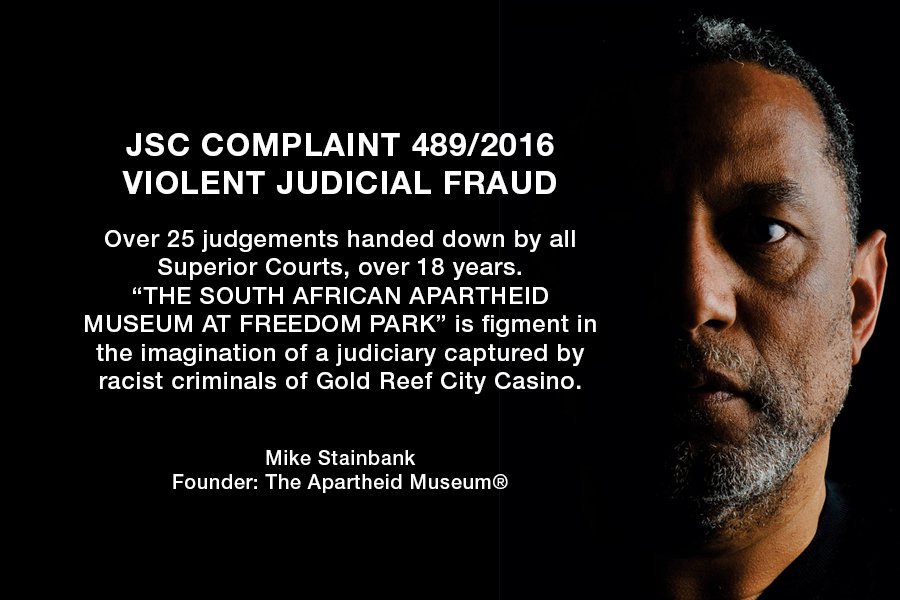 Please note. We have a Judge at managerial level of judges. He owns a portion of a company that holds gambling license rights. He, this high-level judge, comes to own this license, and of course money that accrues to him, because his company had to comply to certain terms in order to be granted the license. One of those terms was to build a structure that would serve to give back to the community —since gambling licenses take so much money from the people. I digress: In fact, gambling licenses take so much money from the people the license is in some quarters known as the right to print money. The structure promised, as condition to grant license to the judge and his chommies, is Freedom Park. As is now history, this Freedom Park promise fell between the cracks. In its place, The Apartheid Museum is wrestled from Bra Mike. And as is now history too, The Apartheid Museum trademark is dispossessed from its owner, it is dispossessed by a company of a judge who doesn’t recuse himself from his duties of appointing acting judges who sit on this case and flounder the law. Is this a call for concern? As Blackhouse Kollective, we say this is more than a call for concern. Especially because the said Deputy President Judge didn’t even have the balls to say yes or no, when Blackhouse showed him that his name appears in a list of shareholders to a company that dispossessed a black person’s intellectual labour.

By shutting up Bra Mike's grammar of suffering in this manner — that is, by collusion of executive powers in the person: Rob Davis, with judiciary: Deputy President judge and his many acting judges he assigns this case to, including the first Justice Southwood to sit on this case, a judge who should have recused himself too, and neutral state institutions: like Registrar of Companies operating on cadre deployment mandate rather than operating on mandate by the Act of Parliament; that all these three organs of state come together in this case to deny Bra Mike his right to be protected by the law like any other citizen, escalates this case from mere trademark case to a political case.

By bringing together this clenched fist of the three sphere of government to mute a man's suffering, the state, as we know it, implicates itself in assault meted out on another platform, it implicates itself on how it can administer violence on bodies who possess no ontological resistance, to use Fanon’s formulation, against it. This also means that, the set up as we know it is as racist as though P.W Botha was still the president of this country.

It makes it very difficult not to be reminded to bring an insight by Fanon when he observed that: Blacks have no ontological resistance to anti-blackness. This is what Biko calls white supremacy — to which he designates the thesis of the problem black people are in.

This is a kind of racism fraud and corruption sanctioned by the judiciary, the executive and (the bending of acts of) Parliament— by comrades who sit (in their majority in Parliament) and make rules, rules that they, the governing cabal, clearly break at a whim!

The acting judge Keightely has dismissed that debunking her premise of incorrect facts may lead to another court establishing that there is no wilful intent and or mal-intention in public pronouncement made by Bra Mike — these are people about which Bra Mike has evidence pointing to their committing fraud, corruption and racism. To Bra Mike, these people, among whom is one lauded George Bizos, are indeed racist as he claims. #JusticeForBraMike