Objects of Desire, Addendum, is Meleko Mokgosi’s second solo exhibition with the Stevenson Gallery and his first in Johannesburg.

Objects of Desire, Addendum exists as a postscript to Mokgosi’s acclaimed, long-standing visual essay, Democratic Intuition, of which Comrades, exhibited at Stevenson, Cape Town, in 2016, was the second of eight chapters. Comprising painting and sculpture, Democratic Intuition questioned how one can approach the conceptual promises of democracy in relation to the daily lived experiences of the subjects that occupy southern Africa.

As the closing chapters of the project, Objects of Desire – shown at Honor Fraser, Los Angeles, in 2018 – and Objects of Desire, Addendum jointly examine the contemporary African object with the aim of challenging the legacy of African art as a tool for modernists in developing their own methodologies. Of this particular exhibition, Mokgosi states: ‘It is a reworking of some of the major elements from the final chapter, narrowing and clarifying the argument.’ 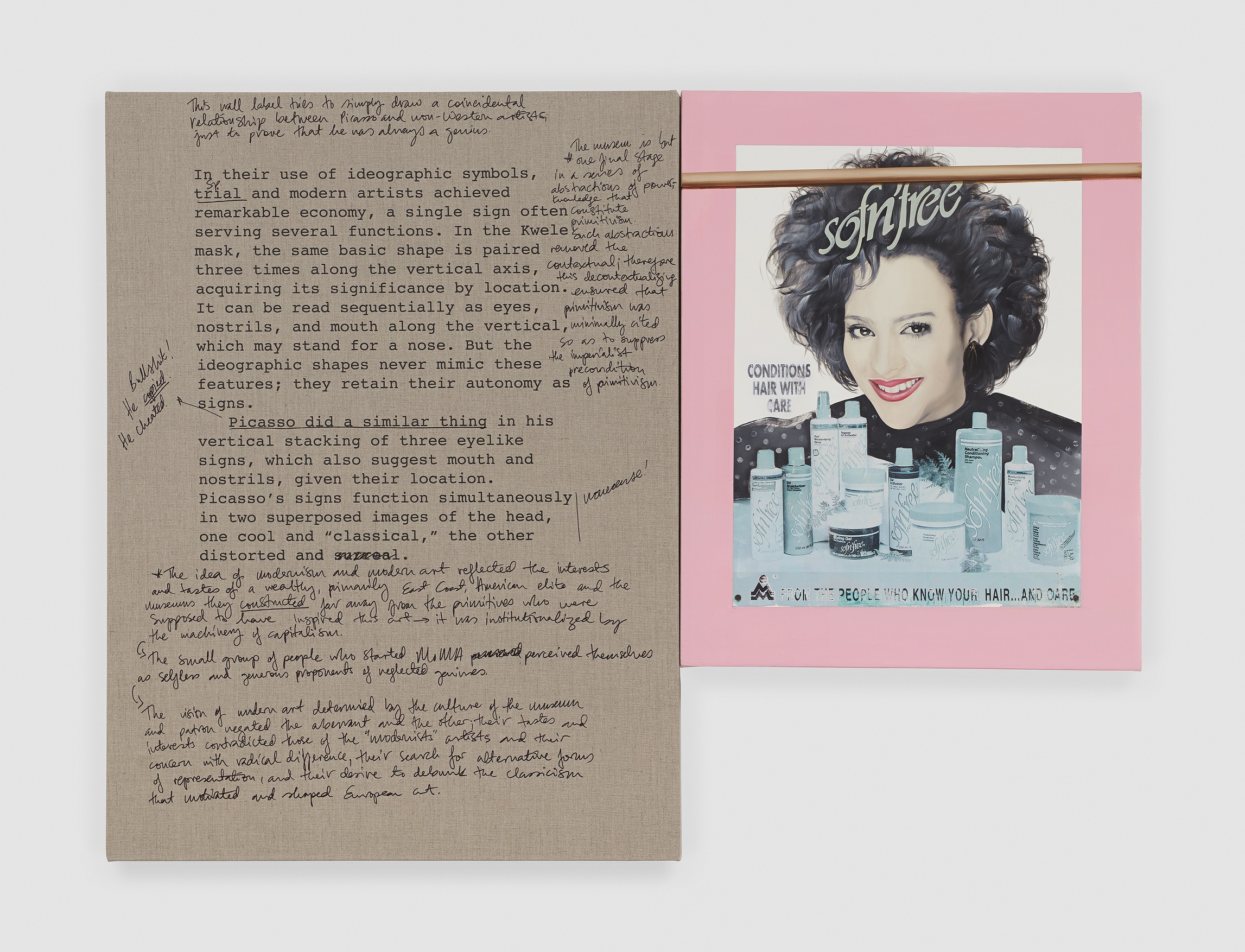 Mokgosi’s research for this body of work included looking into the Museum of Modern Art’s archives, specifically the exhibitions ‘Primitivism’ in 20th Century Art: Affinity of the Tribal and the Modern (1984) and Objects of Desire: The Modern Still Life (1997). Both of these exhibitions received backlash – heightened with time and critical distance – over their treatment of African objects as ahistorical furnishings in the service of Western cultural hegemony. In his turn, Mokgosi has swapped in decorative African objects for the sacred, and added recreations of popular images and kitsch posters often found in lower-middle to upper-middle-class African households, allowing his chosen mode of ‘history painting’ to function recuperatively. He recounts:

“By using images and objects that are part of my immediate experience, I am hoping to put forth the idea that the work we always do as artists (especially artists who are conditioned by the discourse of post-colonialism) is not always about ‘critique’, or that ‘critique’ takes many forms and in most cases requires a high level of intimacy and love. I chose objects that I am attached to, and objects that will resist many forms of aesthetic critique or judgment. Even if one wanted to undo modernism and the violence it produced, one would still have to use modernist protocols to unsettle modernism. So even in the South African artistic context, it is impossible to get away from modernism, modernist aesthetics and tools of analysis, and wanting to somehow be a part of the history or the teleology. My hope is that Western methods of analysis and aesthetic judgment will be decentered in the future, allowing another way of understanding how to make meaning of an aesthetic encounter with an aesthetic object.” Interspersed between the paintings of objects, Mokgosi presents texts taken from MoMA’s authorial labels for Primitivism and Objects of Desire, overlaid with his own annotations and research, making evident the cultural biases and omissions in these influential texts.

Mokgosi was born in 1981 in Botswana. He studied for a BA at Williams College, Massachusetts, and attended the Whitney Independent Study Program in New York; thereafter, he completed his MFA under the mentorship of Mary Kelly at UCLA. He was an assistant professor at the Gallatin School, New York University and has recently been appointed Associate Professor in Painting/Printmaking at the Yale School of Art.

Mokgosi's Bread, Butter, and Power travels to the Smart Museum of Art, University of Chicago in October 2019. Previous solo shows have taken place at the Baltimore Museum of Art, USA (2018); the Fowler Museum, UCLA (2018); Williams College Museum of Art, Massachusetts (2017); Rochester Contemporary Art Center, New York (2017); and the Institute of Contemporary Art, Boston (2015). In 2012 Mokgosi was awarded a Studio Museum residency, and was the recipient of the Mohn Award during the Made in LA biennale at the Hammer Museum in Los Angeles.