Gallery MOMO is proud to present Matter, a solo exhibition by Patrick Bongoy. The exhibition consists of a series of new sculptures and tapestries constructed from red and black rubber and hessian cloth, materials which Bongoy uses to examine the past and present of his home country, the Democratic Republic of Congo.

Matter draws out the history of rubber as a precious natural resource and its relationship to the colonial past of the DRC and its afterlives. The works reflect on the violent exploitation of labourers who harvest the material, as well as environmental damage that has occurred as a result. “Generations of my people are being used as part of the machinery that plunders and exports its treasures,” says Bongoy. The artist uses the material to address the trauma, erasure, forced migrations, the loss of cultures, and fragmented identities. 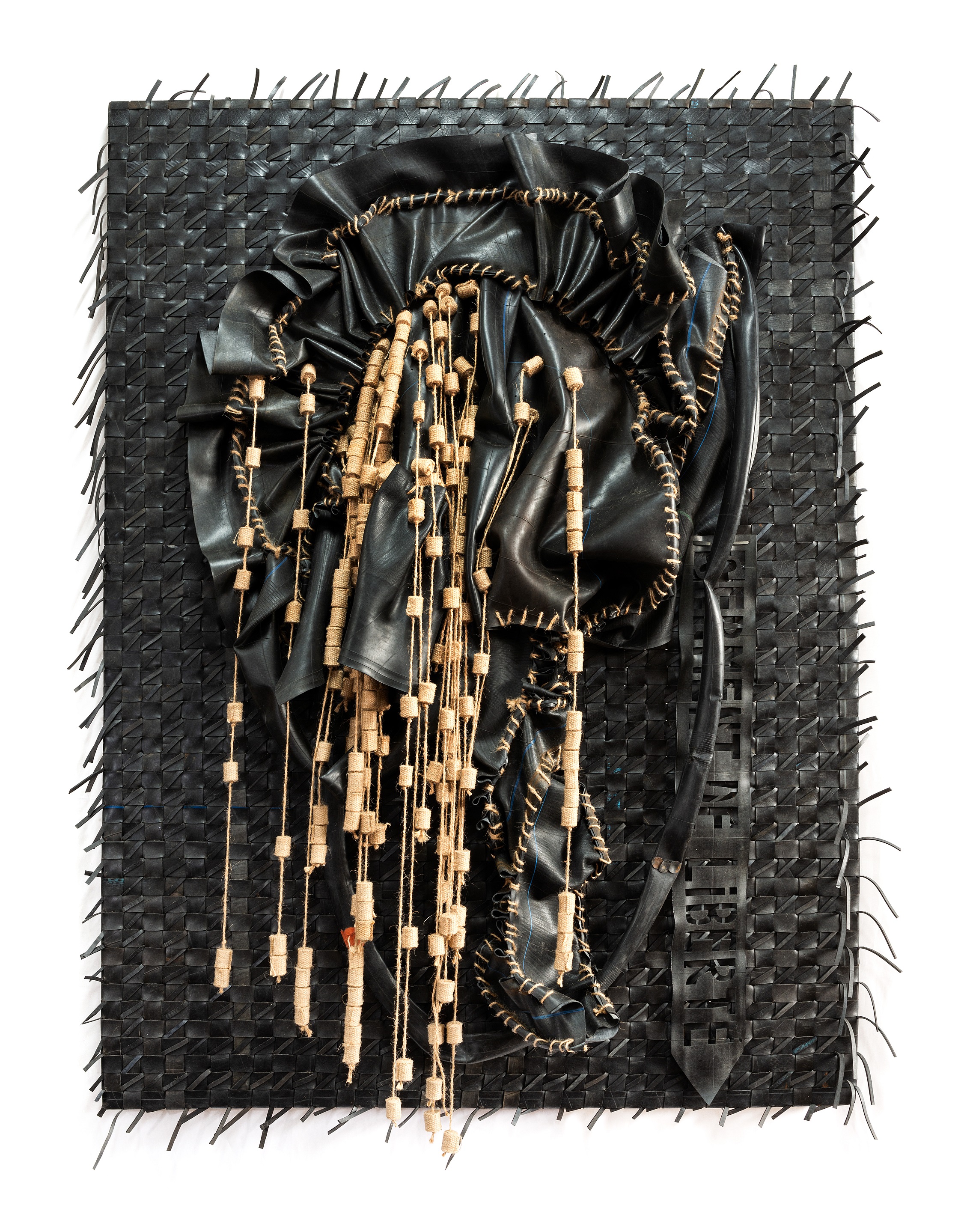 But, Bongoy does not see rubber as solely an oppressive tool. Matter sees Bongoy assign the charged material new meaning, imaginatively transforming its dark symbolism without erasing its history. “I am reshaping what in some ways has shaped me,” he says. “I am bringing life out of 'dead' matter.”

In this exhibition, Bongoy extends his visual vocabulary by introducing new interpretations of the rubber. He cuts letters and numbers from the rubber and integrates text into his tapestries. Bongoy continues to excavate the themes explored in his recent exhibitions Remains (2019) and Where are we? Where are we going? (2017), but on a much larger scale.

His work constitutes an intentional effort to remember, resurrect, and recreate life forms from the remains of environmental erosion and economic exploitation. Bongoy’s labour-intensive and socially-engaged practice examines the impact of mineral wealth both on the environment and on the lives of the people who unearth and harvest it.

Patrick Bongoy (b. 1980, Kinshasa, DRC) is a Cape Town-based artist working in rubber and transforming it into intricate sculptural works and installations. He graduated from the Institute of Fine Arts (2005) and the Academy of Fine Arts (2009), both in Kinshasa. This is Bongoy’s third solo exhibition in South Africa, followed by Where Are We? Where Are We Going? presented by EBONY/CURATED (2017), and Remains, presented by the Association for the Visual Arts (2019). He has also participated in several art fairs and group shows, such as Cape to Tehran at Gallery MOMO (2017) and Nando's presentation at 1:54 London (2017).