Chronicles of a Christian who Reads

I’d been a Christian for eleven years when I snapped out of it. That was twenty years ago. The epiphany was a violent rupture of sorts, but the actual 180-turn, my metanoia, was rather slow. It took six years for the tradition to wear off. I was a seasoned charismatic, a convert to the holy-ghost filled water-baptized American evangelical brand of Christianity. I was a child of God, cut from the high priesthood cloth of the cult. It’s do’s and don’ts bezibuzwa kum: ‘prayer & fasting’, ‘no sex before marriage’, ‘no drinking’, ‘no smoking’ and all things: ‘we walk by faith, not by sight’. I was sincere. As sincere as a hand few continue to be in that tradition.

I won’t lie and say there are no good things to harvest from that nginyuYesu brand of bazalwana. There are many benefits in fact. You find a sense of family, for one. Discipline and structure. No least is that; the space cultivates an atmosphere for reading. Well, that’s me tailoring it to my propensities.

Of course you can expect to unmask strong doctrinal underpinning over time; and many times this motivation to read will overlook dogmatic fervour underlying unconscious bonds that bind all ‘one, in The Faith’. There’s something truly grand about that violent fraternity. It’s a kind of fanatical association propped up in the name of God. This violence of affiliation is its ideological matrix.

It’s earned by blood and the gory story of the cross. It has to be violent.

Some hybridized versions of that matrix exist— our people will wear umthika on Sunday, yet the Saturday before ebebuyisa umlowo wekhaya ngenkomo. You will find our people with one leg in: sold to the heavenly-minded/earthly-useless madness, and with another leg out: sending feelers to ground oneself in the real world, out here.

The madness is not my greatest indictment of this brand. Madness in itself is not a bad thing: “it took mad men & women of yesterday for us to act with extreme clarity today”— Thomas Sankara. It’s what the madness is in service of that’s the matter with me.

Christians have a rich literature for the life of the mind, and the mind exists in the pendulum swings of madness: the folly of fantasy in stupidity and the folly of fantasy in insisting on freedoms. You can go from Josh McDowel to Ravi Zacharias. From Paul Tillich to Francis Schaeffer. From Gustavo Gutierrez to West; from Cone to William R Jones— contemporary and near-ancestors, all Christian apologists of one degree to another. All clad with the amour of turning the follies of the mind into clean fun and freedom.

Christianity is a big player in the business of interpretation. In precisely this way, it is generative of hegemonic interpretative schemas. Prayer, for starters, can no longer be imagined outside its lingo. Secondly, any appeal to the world of spirit is now bifurcated into God and demons. Devils are black, Angels are white. Iminyanya (yethu): ooMlanjeni, ngamadimoni. UAbraham (isinyana sabo) nguyise wamakholwa. There are many other things Christianity colonizes and fixes into its own sense-making self-evident commonplace. 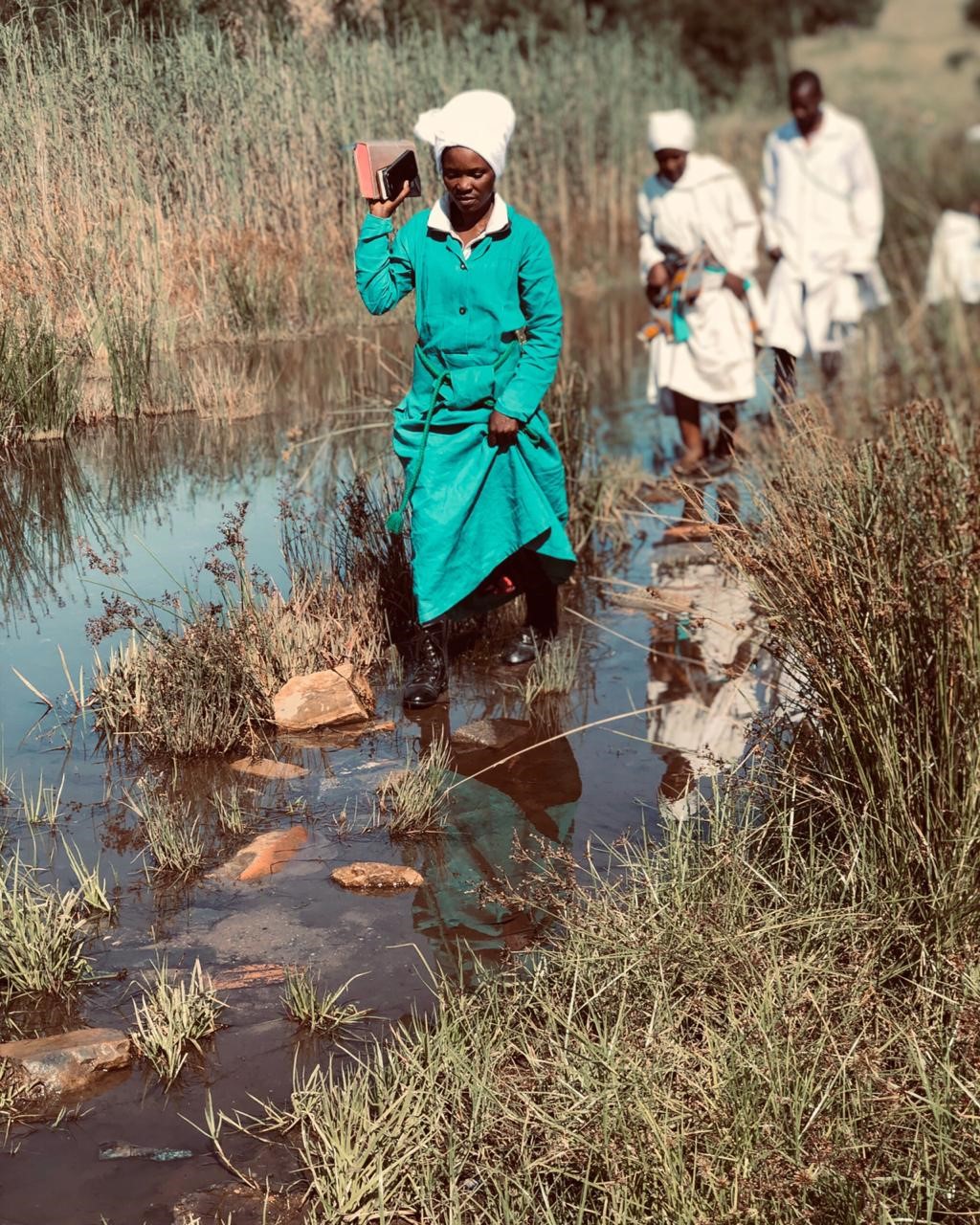 Christianity, to be sure, is a playground of many theories and fictions. It exudes in narrativescapes and rubrics of telling that provide a network of meaning-makers and meaning-carriers. This is a thinking tool by which Christianity combs through the unkempt of our senseless suffering, the Gordian knots of our general human experience. This is how our people have found a spiritual and intellectual home for black pain in the Church.

It is worth noting that, our people, in their teeming numbers, accommodate themselves in Christianity and never the other way round. We cut ourselves to fit the cloth, literally.

I could not have known this back then, at least not with as much clarity as I believe I do now, today. But one thing made me uneasy even back then. The loving God who will punish people in eternal fire, ... that God gradually lost His fear-inspiring sting. First the idea of a petty God who delays Justice to some unknown future, didn’t seat well with me no-more. It also seemed to me that there’s little use to Him harbouring a ‘let out’ frenzy for revenge in some lake of fire, in some subjunctive temporality. We need day-to-day balance today. We need Justice today. We need harmony today. We cannot stand the picketing and the picket fencing living side by side. This thing yofilisha ba siyaposwa apha, was wearing my patience thin. My spirit became increasingly restless with the idea of harmony in some end of the world distant future. It wasn’t cutting it for me no-more.

The bully antics too made me feel otherwise. What’s wrong with this guy, God? Why does it seem that he’s suffering from an acute sense of poor-character? Is he on an assholeness disorder medication? If not, He possibly should get on one.

It would take years to come to the light, that this God is one of many versions. I would grow to appreciate that His antics reflected less of Him and more the poverty of humaneness, the poverty of thought that deform Him into this evil monster. This childish and whimsical God, was no God at all. He was a crutch for backwardness and straight out vulgarity. He continues to be for many, unfortunately. You know the verse in Mathew 7: 13- 14, “ngenani ngesango elimxinwa.” This was me, eleven years later, twenty years ago, crossing the narrow path. “Ngokuba kwelibanzi isango, iphangalele indlela eya entshabalelweni”. This was before the vulgarity of Mboro and the Major one, the hustling of Omotoso and T B Joshua. Wide is the gate by which grass-eating sorcery and snake charming tricksters now enter. It didn’t start here. It began with missionaries scrambling for gold behind the rainbow of land dispossession. I’ve said it somewhere, Ubuntu bethu makes the best tenets of Christianity— the one apologists root for, and the best attribute of communism, redundant. In Christianity too, ubuntu bethu pumped that old wine skin with the life of new wine. Over time, those old wine skins of Christianity according to the Gospel of white missionaries, broke.

At the time, I tendered in my resignation. I will not raise someone on the plinth of worship-worthiness while that someone has such poor characteristics. If I could do a better job, were I to organize so much passion and energy under the banner of a name, “God”, then why did I need God? If His powerful shoes I could fill and deliver better results, why do I not confront Him then? I said to myself, if I’m gonna worship God, it’s gonna be on one condition: He has to be better than me. Why do I chicken out and worship Him when I clearly don’t think much of Him? Is it because I’m afraid He will burn me in Hell, is that his only way to respond if I gave Him a piece of my mind?

So, I dared God to go ahead.

Either I was going to be true to Him, tell Him that He’s a little piece of shit and He must change His ways— and He could take it like an adult; and we could be cool. Or, he can’t take positive criticism anyway; and we part ways.

So, one night, in a prayer that lasted till daybreak, like Jacob, I wrestled with God. I tune Him, “Bra, honestly, I don’t like your shit. Why you gotta be like this? What’s this whole story with hell?”

Of course I couldn’t come out of that as I went in, He broke my hip bone; but I won. I was true and couldn’t be truer.

With a friend, we did a little research on the word hell. It’s origins and meaning. And we came across a number meanings, none of which meant hell in the doctrinal sense of Christianity. None of the meaning were part of the sale’s pitch from Kenneth Copeland or T B Joshua TV shows. The meanings of hell, in places where they are used in the Bible — yes there’s more than one meaning of hell in the Bible, in fact there’s plenty (if you study to show yourself approved to God, a workman that need not to be ashamed, rightly dividing the word of truth: 2 Timothy 2:15)— don’t keep converts pensive in fear. There’s no coming doom’s day— in some lake of fire.

“Hell is not a place you go to, when you’re not a Christian. It’s the failure of your life’s greatest ambitions”— Immortal Technique. Well, what greater graveyards and dream killers that bury our ambitions live than townships?

Vuka Darkie, you already live in hell. That’s what God whispered when I wouldn’t let him go. I walk around with a limp now, from fighting with Him, till daybreak— like Jacob.