Sometimes Blacks Are the Problem

Solidarity/AfriForum is 'racist' nwe! nwe! nwe! What about our own kak mindset as Blacks? In one night, we rake up alcohol bills of up to R200k at Cubana, take pics of them and proudly post them on social media.

After the funerals of prominent political-preneurs and socialites, we show off stacks of bank notes at kasi shisanyamas. We do this infantilism in some of South AfriKKKa's most economically-depressed areas. What message are we sending to the Black young people in these kasies? 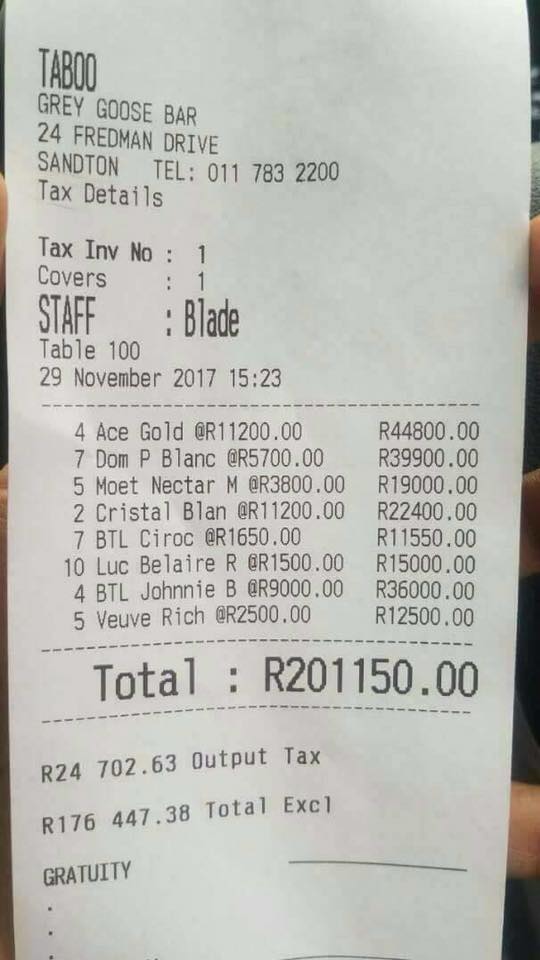 It is us Black people who engage in all this msunery. Not Solidarity or AfriForum! That's how heartless we are. Then we want to turn around and call Solidarity racist for using their membership subscriptions and other funding, to build 'Afrikaans' educational institutions? WTF?

Think about this. As you read this, there are mud schools or schools with pit or no toilets in a number of provinces and areas where Black people live. We see them and drive past them every day.

What are we Blacks or the Black unions (that have more members than Solidarity), doing about this? As far as I see it, the main problem is not so much the racism of Solidarity/AfriForum

The problem is the greed, narrow mindedness, pettiness, lack of solidarity and general slave mentality among us Black people. This is particularly true for the Black political class in unions and political parties, who place self-serving- factional interests above the plight of the Black people in South AfriKKKa.

So bakithi, before we spew bile on Solidarity/AfriForum, we must first introspect and confront our collective uselessness as Black people in South AfriKKKa. And the lack of vision and cowardice on the part of the Black political class, in their failure to design and fearlessly pursue a radical political programme that deliberately and unapologetically seeks to change the lived reality of the Black majority.

As Black people in South AfriKKKa, we are simply too apologetic about the advancement of our own Race. In fact, singamagwala! Nothing stops those Blacks (who are not part of party-political msunery), from pulling their ideas and resources together, and doing meaningful things in the Black community.

Through the Black Power Front (BPF), we have started some initiatives in this direction. We hope to mobillise more resources and inspire a national wave of authentic- sustainable- non publicity seeking- unapologetic Black self-help initiatives.

Are we aware that as Black people, we are more than capable of building our own schools, crèches, universities, printing companies, retail outlets, banks, insurance companies etc. and running them professionally? We can do this! We don't necessarily have a shortage of capital, skills or ideas. No!

We just have a kak mindset that continues to empower our race-enemies and disempower us as the Black people! Qha! It is the same kak mindset that undermines the work that some well-meaning Blacks are currently doing in the Black community-which is aimed at putting us on a fundamentally different development trajectory as a Race.

AfriForum/Solidarity or Freedom Front Plus are not successful in their white community-oriented projects and agenda-simply because of capital and skills. No! They are fuelled by something much more fundamental and profound than money and skills. They have something called race-pride.

As a race of people, your money and skills are useless if you don't have race-consciousness. Our lack of race-pride and race-consciousness as Black people in South AfriKKKa is primarily responsible for the shame of continuing to be a demographic majority, but an economic minority-in the land of our Ancestors. Cabanga!

Let us wake up, pull our ideas and resources together and lift our Race up. We must also stop pretending that race or skin colour has nothing to do with power, politics and economics. In the world as currently organised by the violent- hegemonic force called whiteness-race has everything to do with everything.

The system is not working for Black people because, in the first place, it was not designed with Black people in mind. Let me stop here. Talk is cheap bakithi. Let us meet at the level of unapologetic Black community-oriented projects, initiatives and campaigns.

1
A Letter to MaDlomo: Warrior Queen Zindziswa Mandela
2
On Hating Your Enemy
3
Nathaniel Julies Through Biko’s Eyes – A Memorial Reflection