The System Will Always Be Offline for Blacks

Queuing is part and parcel of Black life in South Africa. Wherever we are, whether in stores like Shoprite; which pillage the money of Black communities, or in line at the Stellenbosch-owned Capitec Bank ATMs (yes, you guessed right; even there it’s mostly Black bodies that queue). Now, queuing at a government department is the worst, which is not to say that other kinds of queuing are better. Earlier this year, after losing my ID, I went to the Department of Home Affairs, Johannesburg CBD Branch – early in the morning around 7am. When I got there, there was already a long queue of people waiting. Some had come with their infants; for birth certificates, people applying for or collecting passports, and others getting the new ID smartcards. When I arrived, I was given a form to take to the police station for an affidavit, and write therein that I had lost my ID. That would be enough proof for me to get a new ID issued, and I would still have to come back and queue. Now, the government works like this – to hide its inefficiency at first, it throws you around the various departments – so as to prepare you for the long wait for the services you are entitled to as a citizen. By the time you receive such service, you are tired and grateful to them; for taking away the burden of queuing – as if they are not the chief architects of it.

I got back from the police station around 8am, and re-started my queuing journey. Hours passed, and the line seemed like it was not moving. We were all standing outside, subject to the scorching heat and all the elements. We were told around 1pm that most of the staff had gone out to lunch, and we should continue being patient – we will eventually get in. An hour passed, and with our complaints now becoming louder and louder, we were informed that “the system is slow today”. Yes, the system was slow, and they would close at 4pm, meaning that they would only attend to half of us by then. And yet, they didn’t bother to let those of us further back in the queue, who wouldn’t be tended to, know that we should go home and come back the following morning. No, they do not bother, because they do not have to. The Black bodies standing in that scorching January sun, outside, must figure out, with their nutrient-deprived and tired brains that they should just leave… That today, “the system” is not accommodating them. They must try their luck tomorrow – maybe then, maybe then. I left, thinking about the matter. I talked to a friend when I got home, and was told that I should have just gone to the Home Affairs branch in Randburg – it is fast and is almost never full. What he was saying was that… it is situated in a white suburb, the staff there are efficient, and you will not spend your day there queuing – unlike what Black people are subjected to, in Black areas. The instant rush to white spaces and services, when disappointed by our own, is not new. It is grounded on the myth that white equals fast and efficient, and Black is synonymous with slow and incompetent. This myth then replicates itself throughout society – is a self- fulfilling prophecy that becomes ingrained in the very fabric of our society.

So why do South Africans keep hoping that “the system” works just fine; when they keep on being disappointed by it? The system is alive and well, because it functions only to keep itself alive – not for the benefit of all the people. It sells us lies that it will get better, and we believe them; not because we want to, but because we cannot fathom life without it. But, ironically, knowing the system does keep one alert, and sways one away from being disappointed. I had a conversation in early May with my mother, during the lockdown, when the Minister of Higher Education was promising all NSFAS-funded students laptops (be they registered at a TVET College or University). Now, Minister Nzimande did this deliberately – to look and sound good to our parents – and at the same time make it look like his department is doing something to assist in learning.

Perception is everything here, but it’s just a distraction. When he made the statement, I kept on laughing and laughing, and my mother got angry and I stopped. But I kept interrupting, as I usually do; passionately predicting that he will never give laptops to students. I know, and many students know, that we will not receive laptops from the government. We know that, if they do send out laptops, only a few will eventually get to the designated students. And we know, that the only way for them to even consider sending out laptops is if the institutions are not doing the distribution. It must be comrades, not staff at NMU, you see... Comrades must eat. The system must take care of its agents. The system thrives on corruption, and is upheld by it. You’ll hear politicians and religious leaders claiming that corruption must be rooted out; describing it as an evil we must pray against. But corruption is a symptom, a characteristic – it is not an event. You cure a symptom; the disease rejuvenates itself in another form, with another symptom.

“Corruption eats at the moral fabric of our society” they shout at their rallies, pointing fingers at each other – but how can a society that is capitalistic even have morals, when capitalism itself is inherently evil? But hey, we love our rhetoric and the playing of the English language in political spaces, since it still fascinates our people.

In the general elections of 2019, the ANC ran a campaign on Ramaphoria which just meant, “we are now updating the system”. We are rebranding it; the Zuma era must be vilified and castrated, to start on a new page. It worked, the ANC won convincingly, and things went on as ‘normal’. Not much changed, in fact things got worse, but politicians will always be politicians. They will tell you and our parents that they are cleaning out the rot, they are changing the oil in the engine, we must be patient as passengers – everything will run smooth in the end. But we know there is no end, there never was – we are merely in a car, which at every stop offloads a few, and goes on. 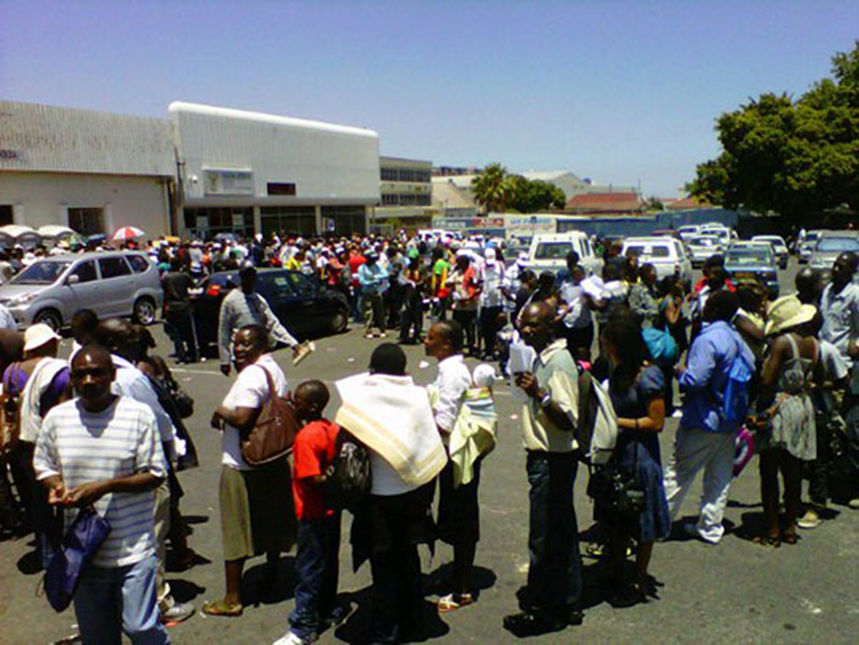 They system is organised in an exclusionary manner; only available to a few because it was built like that. Like a computer that’s being overused, it reboots itself, and we wait excitedly – hoping it will be efficient here and there – but after it switches back on and we use it for 30 minutes, it reverts back to its normal speed; of inefficiency and frustration. After an hour, a message pops up, the computer is now warning you of its overuse (these are the protests that keep coming up abruptly and spontaneously, the unemployment rising and crime increasing), so you close a few tabs (that’s the government using its legitimised force by clamping down on dissident voices). After this, homeostasis is reached, and you carry on with whatever you were doing… As further time lapses, a notification pops up, reminding you the computer will reboot in 10 minutes.

At this point you are frustrated and livid – you know there is an alternative; that you could gather up your will and courage and sell your computer, but you don’t. The problem here is that you are attached to it, because you have saved all your files in it – your hopes, dreams, fears, aspirations and those dear memories that you drift back to, time and time again. It is unimaginable to part with it, even though it is necessary, and you know this. You come up with excuses for its incompetence, like maybe if you serviced it regularly; but you know that this is expensive – it is the same thing as buying a new one. All the excuses you conjure up turn out to be illogical, because from design this computer you own was not meant to exist forever...

So I sat that day, thinking that I did not have the money to catch that taxi to Randburg. Besides, my legs were already in pain – I would need to rest a day. Maybe I would go the day after that… and as I unravelled, a certain sense of calm laid claim to me. And I came to one conclusion, the system will always be offline.