Black People Love The whiteboy More Than Self

In March 1996 Chief Nicholas Gcaleka returned to South Africa from a trip to Scotland with a skull he claimed to be that of Xhosa Warrior King, Hintsa KaKhawuta who was killed during 9th War of Land Dispossession (called the Kaffir Wars by whites) and beheaded by British troops in the early 1800s.

After Gcaleka returned with the skull he claimed was Hintsa's, the Xhosa leaders - and perhaps by extension the Xhosa nation - did not believe him, despite the fact that he had been led to Scotland by visions in his dreams and actually came back with a skull (remember you don't just travel with human body parts now, especially internationally).

The Xhosa King, Xolilizwe Sigcawu, then siezed and confiscated the skull from Gcaleka, saying the royal family wanted "scientific tests" to be done to establish its 'true' identity.

Basically, to prove whether or not Gcaleka was lying and merely superstitious in claiming his visions led him to King Hintsa's skull in Scotland.

The Xhosa King and nation had been under the yoke of white supremacy for almost 200 years then. It was exactly 164 years after King Hintsa's murder. 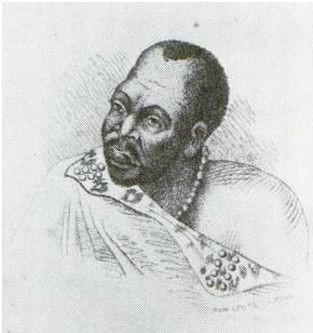 The Xhosa King, Xolilizwe Sigcawu, was a Christian then. And so were members of his family and other Chiefs around him. They all believed in white Jesus.

They did not believe nor subscribe to their own Xhosa science and spirituality (their scientific spirituality) which had led Gcaleka to Scotland in the first place.

This is despite the fact that the head Gcaleka returned with a skull that had a hole in it (which he claimed is the bullet that killed Hintsa).

The Xhosa King then set up a panel of white scientists to establish or verify whether Gcaleka’s claim that the skull was that of King Hintsa kaPhalo was true.

Of course, the "scientific" results came back saying that the skull was not Hintsa's.

At first the white scientists claimed that the skull belonged to a Celtic monk and these 'findings' were leaked to a Scottish newspaper.

Later, Tobias' panel claimed that the skull belonged to a middle-aged European woman.

King Xolilizwe Sigcawu then publicly denounced Gcaleka, saying he had acted without proper authority and was not even a member of Hintsa's clan.

Xhosa Chiefs and traditional healers in the Eastern Cape followed suite, denouncing Gcaleka as a charlatan out only to make money and boost his image as Igqirha (sangoma).

Black leaders could not comprehend Gcaleka's claims because they are descendants of Kings that were defeated and subjugated through Christianity and settler-colonialism.

They chose Tobias over Gcaleka, and it was dressed up as science. A monumental victory for whiteness yet again.

They celebrated it as a victory of European civilization over Afrikan barbarism.

Today, King Hintsa's bones still lie buried without a head. Not only His head; many other heads, many other limbs and body parts - sent to Europe as trophies.

And we wonder why the Black nation is bedevilled by so many ills today. Siyaphela yingqumbo yeminyanya.

Black people love whites more than we love ourselves.

We trust white "science" more than our own science.

We relegate our own to the realm of "superstition".

It is no wonder that to date, amaGqirha and amaXhwele have very minimal role in the Xhosa royal house.

Bishops, pastors and priests of the whiteboy's church have more authority, power and roles to play than the "superstitious, demon-possessed" ones.

While we quickly forget, history never forgets! It was the Scottish Missionaries that were committed to eradicating Xhosa customs and culture.

Black people, whether Xhosa or whatever other Afrikan nation, have accepted and internalised defeat.

We undermine and look down upon our own culture as 'backward' and 'outdated' yet practise other people's culture and worship other people.

For this reason, all these Xhosa leaders that spoke at Kumkani Zwelonke Mpendulo Sigcwau spoke about Jesus having died for them.

King Hintsa KaKhawuta did not die for them, apparently.

1
42 Years on: Dis-membering Sobukwe
2
Black People Love The whiteboy More Than Self
3
Biko Had No Special ‘Relationship’ With Johan Rupert