42 years after his death under banishment, the legacy of Prof. Robert Mangaliso Sobukwe remains but a haunting shadow in South African historiography, dis-membered and left to the vultures to feast on its carcass.

It is now 26 years after the sham of South African democracy and the fraud of rainbow nationalism championed by Desmond Tutu, Nelson Mandela and F.W. de Klerk, yet South Africa continues to dis-member Sobukwe.

Sobukwe's legacy and memory is a pariah in South African historiography and narrative, omitted and ostracised from dominant public discourse.

Sobukwe's dis-membering takes on many forms; he is completely erased from narrative and discourse, no significant monuments are erected in his name, his outstanding landmark contributions are not included in the educational curriculum, his family is not afforded the same benefits as other families of liberation stalwarts, and heritage institutions related to him are undervalued and prone to a series of concerted vandalism.

A case in point is the historic offices R. M. Sobukwe Attorneys located at the Mayibuye Precinct in Galeshewe township in that small town called Kimberly in the Northern Cape. Declared a national heritage site in 2005, it continues – like other Sobukwe related sites - to be a space haunted by ghosts of nothingness and violent spirits of vandalism.

In March 2018 the Northern Cape Department of Sport, Arts and Culture (DSAC) announced that this historic building that once housed the law offices of Prof. Sobukwe would be refurbished.

This announcement came at a time when the Sobukwe Trust, a non-profit organisation established by the Sobukwe family to preserve the Sobukwe legacy, was also working on a plan to not only preserve the building of Sobukwe's law office, but also to set up programming to memorialise his legal work by starting a pro-bono community legal resource centre.

Rather insultingly, it was announced that the refurbishment would start on the 21st March 2018 when MEC Mbinqo-Gigaba would be launching the revamping of Sobukwe's law offices under the theme "The Year of Nelson Rolihlahla Mandela: Promoting and Deepening a Human Rights Culture Across Society".

The choice of the theme raised many questions in that it reinforced the footnoting of Sobukwe with Mandela. So, I wrote to government officials in the Northern Cape government raising serious concerns regarding this choice of theme.

I argued that DSAC was actually undermining and negating their efforts at honouring Sobukwe by reproducing this tired footnoting and shadowing of Sobukwe with Mandela. Sobukwe deserved to be honoured on his own, for all his worth to this nation, and not be made some junior to Mandela. 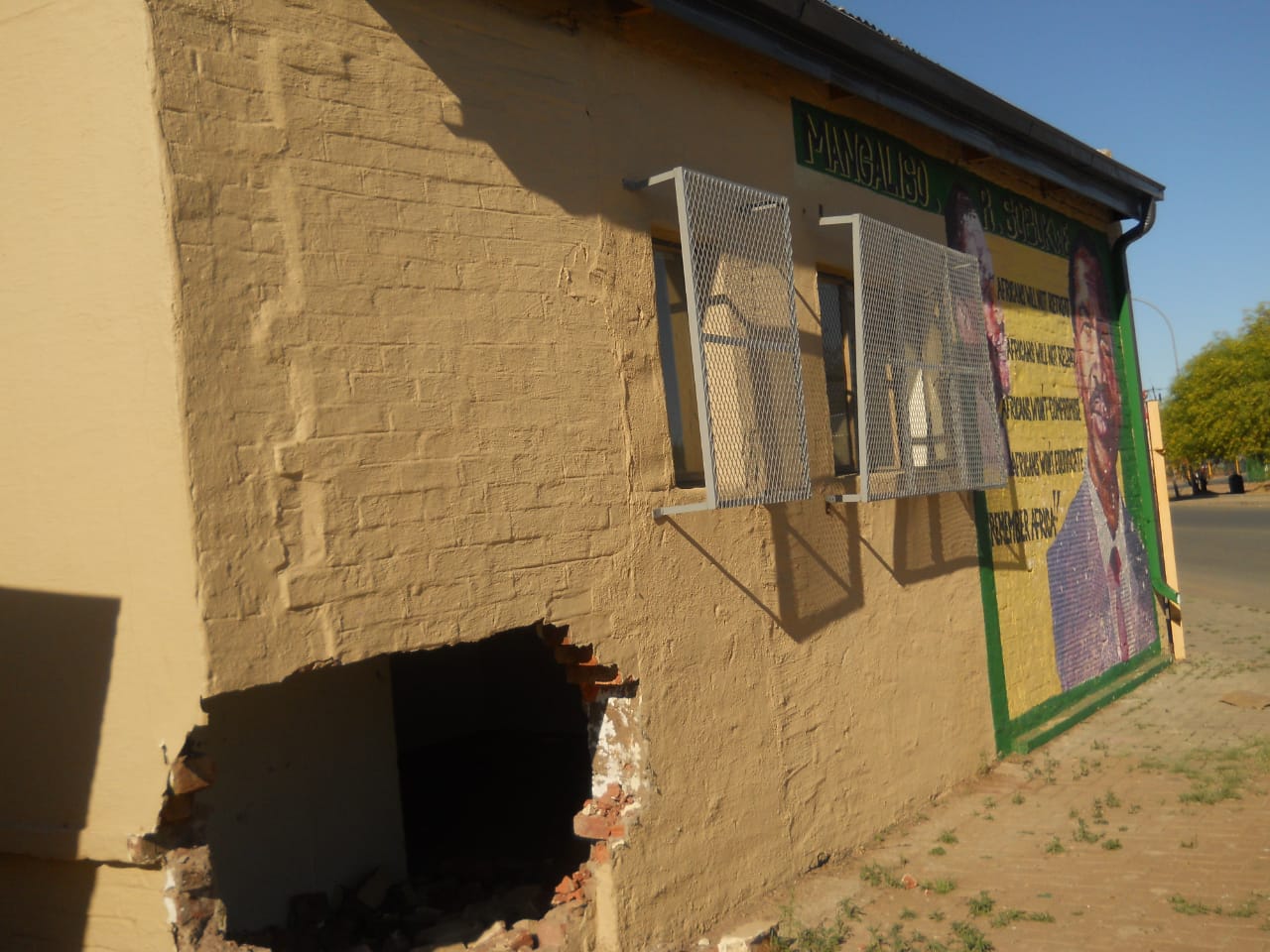 My queries and concerns fell on deaf ears.

A budget was set aside by the Northern Cape Department of Sport, Arts and Culture and work commenced on the project.
We don't know what the budget was (how much money was spent on spent) as this was never publicly disclosed. In fact, not even the Sobukwe family, nor the Sobukwe Trust, were informed of the costing of the project.

It would be in the public interest to know how much was actually invested in refurbishment of the R. M. Sobukwe Attorneys offices; public disclosure is necessary.

DSAC also said the after refurbishment the offices would also have security on site to ensure it doesn't get vandalised again.

Indeed immediately after the announcement was made, newspapers reported that work had begun to refurbish Sobukwe's law offices.

Furthermore, newspaper reports had also announced that the Kimberly Hospital, where Sobukwe took his last breath in February 1978, would be renamed after Sobukwe by DSAC.

This renaming event was planned to coincide with Heritage Day celebrations in September 2018.

When the DSAC officially announced the renaming of the hospital after Sobukwe they issued a poster without any image of Sobukwe, but the faces of Albertina Sisulu and Nelson Mandela. Another deliberate act of defacing and dis-membering Sobukwe.

I subsequently wrote to the government officials yet again raising concerns about this issue, and I further suggested that DSAC also consider not only renaming the hospital after Sobukwe, but also locating and preserving the actual ward where Sobukwe died and that the hospital provided quality services to the community.

Again, these concerns and suggestions fell on deaf ears. And in fact, since then there have been countless complaints on various social media platforms regarding the poor state and services at that hospital that now bears the name of such a noble man.

Meanwhile, the work on the Sobukwe law office had commenced; the refurbishment was done and completed within two weeks’ time. They were rushing to host the Human Rights Day at that location.

This obviously raised flags of a shoddy job waiting. And indeed, lo and behold, the building was simply refurbished with a few blocks and painted over with new paint.

No programme for the preservation or memorialisation of Sobukwe's legal work at that building was put in place.

Late last year I was informed by a close friend who stays in Galeshewe that she had seen that Sobukwe's office had been vandalised, yet again.

The fencing to the building located at the Mayibuye Precinct is damaged, and there's a big hole on the wall right next to a Sobukwe mural painted on the walls of the once R.M. Sobukwe Attorneys offices.

Only two years after Sobukwe's law office was refurbished, with the promises of 24 hours security to ensure safety of the building, it has once again been vandalised, Sobukwe's legacy defaced.

In fact, there were even years when Sobukwe's tombstone at his gravesite in Graaff-Reinet was subjected to constant vandalism. These vandalisms and attack on symbols that represent the memory of Prof signify continued attempts to dis-member and dis-figure, to erase and nullify him, even in death.

However, the ward in which Sobukwe died at Kimberly Hospital remains unknown, unidentified. No effort or work went into ensuring that the actual ward where Sobukwe took his last breath at that hospital was located and memorialized.

Similarly, Wits University has also never cared to identify, locate or memorialise the offices of Robert Sobukwe at that institution where he lectured Afrikan languages.

It was only late last year that I managed to get the actual location of Sobukwe's office at Wits, through journalist, Benjamin Pogrund, who had interviewed Sobukwe at his offices at Wits several times.

When I enquired from Pogrund regarding the exact location of Sobukwe's office at Wits he replied saying:

"The geography of the Wits campus has changed dramatically in the past 60 years. But my memory is that you went in through what was then the main entrance, by foot and by car, in Jan Smuts Avenue and went left, behind the Robert Sobukwe Block (then called the Central Block). A set of single-storey prefab buildings stood there and housed the African Languages Department; it contained a smallish lecture room where Sobukwe lectured and he also had a small office there. I would park my car close to the prefab buildings, I suppose the site today is where the Senate House stands". 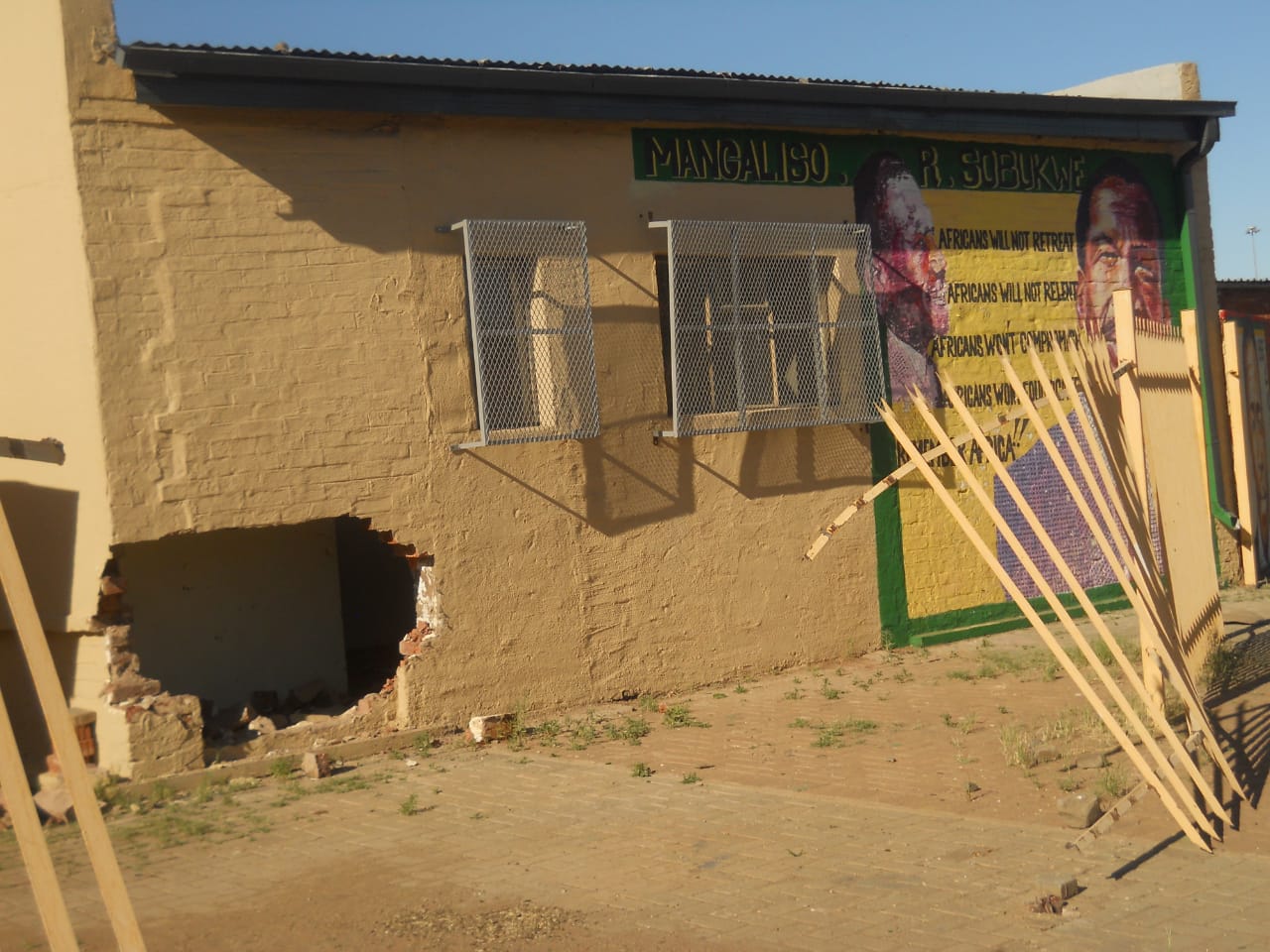 Through Pogrund I also got in touch with Simon Dagut, the son of Merton Dagut, a student of Robert Sobukwe at Wits who went on to become a leader in the financial world.

Regarding my enquiry about the exact location of Sobukwe's offices at Wits, Simon Dagut replied:

"My dad’s memory is very clear on this point, I’m delighted to say! Sobukwe’s office was in the prefabs which stood where Senate House now is, to the south of Central Block. Specifically Prefab B".

The refurbishment of Sobukwe's law office without any programmatic interventions in place to serve the community, as well as the cosmetic renaming of a hospital that continues to offer deplorable services to the people after him, coupled with the lack of will to locate and memorialise his offices at Wits, are just some of the ways in which Sobukwe's dis-membering is ensured.

As we will be commemorating the 60th anniversary of the Sharpeville-Langa Massacre on the 21st March, let us re-member Sobukwe and the contributions he made to the raising of the consciousness and spirit of Black people.

Nations that dis-member and neglect their heroes and heroines are not worthy of the legacies and heritage they represent. They perish.

1
42 Years on: Dis-membering Sobukwe
2
Biko Had No Special ‘Relationship’ With Johan Rupert
3
Black People Love The whiteboy More Than Self