The Economic Freedom Fighters (EFF) 2nd National People’s Assembly (NPA) will happen between the 13th and 16th of December 2019 in Johannesburg, Nasrec, under the theme “Consolidating the Ground for Socialist Power!”. Yesterday, on the 14th of November 2019, the party launched the discussion documents for the 2nd NPA, which have been processed by the EFF Central Command Team (CCT). The 2nd NPA will be guided by the following discussion documents:

In short, the discussion documents speak broadly about the following:

The Organisation character and re-­design perspective is styled as an organic contribution to how the EFF ought and should be positioned as an impactful political party of the working class and as a party that must win political power from those who have it now, capture the state, take the economy and redistribute it equally amongst all people. The perspective further makes proposals on what is to be done, including organisational redesign of constitutional structures, and constitutional amendments.

The Land and agrarian reform perspective, anchored on the founding manifesto as the first cardinal pillar of the EFF, looks at the resolution of the land in South Africa as the most important resolution needed for the emancipation of all South Africans and the ushering of economic freedom in this lifetime. The perspective also discusses agrarian reform and makes proposals. 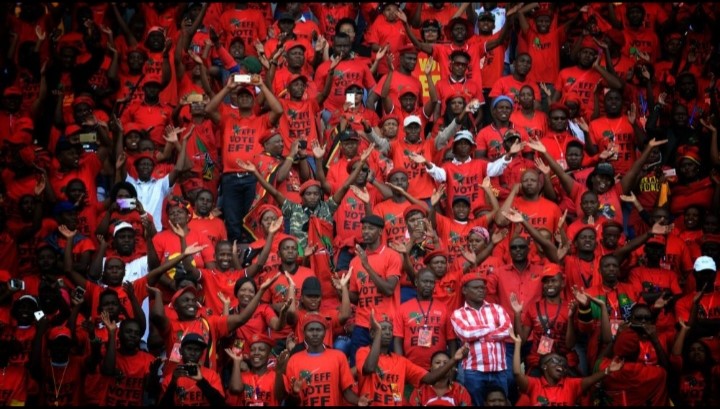 The perspective on gender struggles acknowledges that the struggle for the emancipation of women and gender non-­conforming is one that cannot be divorced from the struggle of black people as the marginalised collectively. The perspective looks at gender struggles in relation to labour, transgender, discriminatory cultural practices, Ukuthwala, ukungena, gender-­based violence, intimate partner violence, education, sexual reproductive health rights and other issues, and makes proposal for consideration by the 2nd NPA.

4. Media, Communications and Battle of Ideas

The perspective on Media, Communications and Battle of Ideas looks at the overview of media and communications in South Africa, and makes proposals on high demand spectrum, improvement of the public broadcaster, curbing of Multichoice domination, transformation of the out of home advertising, critique of South African journalism and StratCom phenomenon, and the improvements on EFF communications.

The Health and Education perspective looks at the overview of public health and education in South Africa, makes a diagnosis of current challenges facing health and education, and make proposals on repurposing the public healthcare system to focus more on primary healthcare, reopening of nursing colleges, and establishment of ward based or polyclinics. In education, the perspective makes proposals on early childhood, teaching focus, teachers training, free quality decolonised education and alignment of skills to economic productive sectors.

The perspective on Pan Africanism and Progressive Internationalism looks at the ultimate integration of the African continent through erosion and eventual elimination of unnecessary borders to build a united Africa. The perspective makes proposals on Pan African Parliament, the Pan African Court on people and human rights, and African standby military force.

Perspective on the Economy provide a diagnosis of South Africa’s economic crises, in particular the racialised economy, and make proposals on natural resources, state-­owned companies, forth industrial revolution, energy stabilisations amongst other proposals.

On state capacity, the discussion document provides a diagnosis of South African state and dispel the myth of a development state. The perspective makes proposals on how to repurpose the state as a driver of economic development, insourcing and intra-­state procurement, introduction of strategic equity partners for state-­owned enterprises and other aspects necessary to build a capable state.

The Justice System makes an important reflection on the current state of justice and legal system in the context of the role it plays as a component of the state. The perspective makes proposals on the role of the courts, our correctional services and chapter 9 institutions.

Sports, Arts and Culture perspective provide the current state of affairs, and make proposals on transformation sports, and arts and culture.

These documents will form part of the 2nd NPA and will be dispatched to all EFF structures and members of society to access and make contribution towards a socialist society where all South Africans can share in the wealth of the country. These discussion documents are not final policy positions of the EFF until they are duly adopted by the 2nd NPA.

We encourage EFF members to engage respectfully, observe code of conduct, remain disciplined, and make written submissions by email to discussiondocs@effonline.org, WhatsApp and SMS to +2782 303 0280. All members of society are welcomed and encouraged to also make submissions.