On the day when Mama Action took to the media and conceitedly proclaimed the exorbitant spend of the African National Congress (ANC) in excess of a billion rands towards its election campaign, Director Jefferson Tshabalala put a youthful team on stage that laid bare the very oftentimes baffling truth grudgingly faced by South Africans every day. In a brazenly tongue-in-cheek delivery, Secret Ballot introduces the audience to a band of pharisaic men who refer to themselves as ‘The Brotherhood’. Incontrovertibly the ANC’s top leadership, they plunder, murder, fornicate, and hold electorates ransom liberally with no consequences. 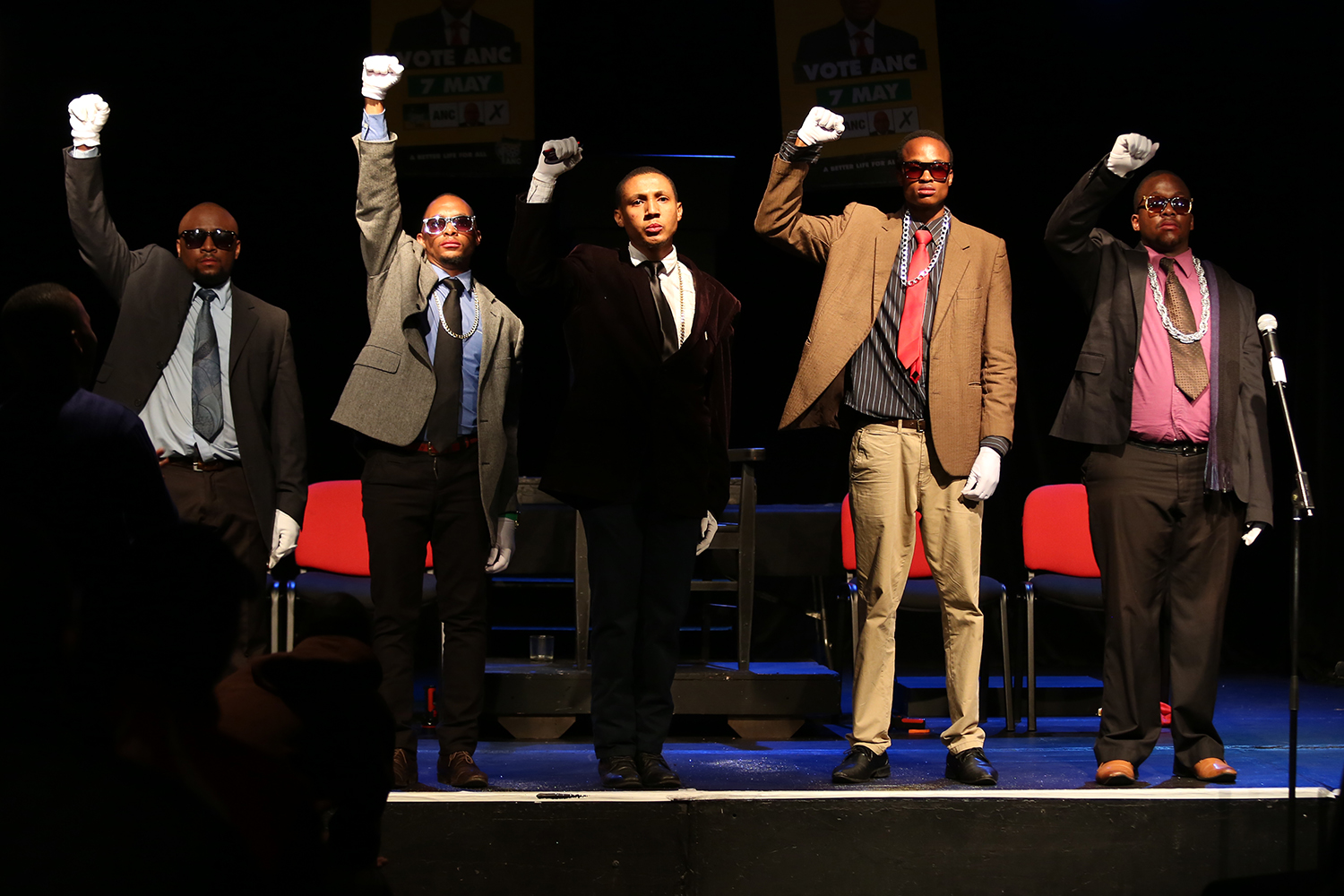 Set in the aftermath of the 2014 South African election campaign and told through five members of The Brotherhood, the show opens with The Brotherhood realising electoral victory that sees them rejoice in scenes reminiscent of serious persons in Molefi Oliphant and Danny Jordan plainly losing their marbles in Zurich as neckties and jacket buttons took flight in all sorts of directions on account of jubilance, the kind that turns grown men into children. The audience is soon introduced to ‘Number 1’ also known as Nkunzi Emnyama, leader of The Brotherhood and the democratic Republic of South Africa. Entitled and manifestly the law and order, Number 1 and The Brotherhood begin to rape, pillage and rundown the country to their hearts’ content. Through the repeated employ of the rape imagery juxtaposed with the act of eating and general consumption, Tshabalala voices what many South Africans are thinking but petrified of expressing. He introduces the emergent concept of social media politics and politicking, seemingly taking a jab at Twitter Comrades in the Shaka Sisulus and Mzwanele Manyis of the ANC and perhaps by extension, the rise of the Economic Freedom Fighters through social media mobilisation. Discrediting this emergence of social media politics and mobilisation, The Brotherhood, goes on to state emphatically and authoritatively that apartheid was not defeated by and through armchair politics. As he equally tackles the culture of cronyism, cadre deployment and tenderpreneurship within the ANC and the highest echelons of government it is apparent that these are exclusive to those identifying with and subservient to the cause. It is not long before winds of discontent and anxiousness mount, bearing foretokens of conflict. As the voices of what appears to be members of the Economic Freedom Fighters echo in the hall reminding Number 1 of what they, as his former students know and are capable of, thanks to his teachings, they all are portentously silenced in a rather weighty minute of the performance. The curtain drops with a devastatingly malevolent laugh from Number 1 signalling a triumph suggestive of his limitless influence and authority.

This well scripted and casted show exceeded all expectations for a performance staged in a 100+ seater auditorium. Starring some of South Africa’s emergent doyens of satire in Zabalaza Mchunu and Tembisa-born Tony Miyambo, Secret Ballot keeps many a member of the audience on the edges of their seats what with the constant breaking of the fourth wall. Torn between a Protest Musical and a Political Satire Farce, Tshabalala and team have done well to invoke memories of days yonder with struggle songs rearranged for a younger audience. Whether you know who will be recipient to your vote on the 3rd August 2016 or not, Secret Ballot should not be missed. As part of the 969 Festival hosted by the Wits Theatre, the show will be dropping its curtain for the last time tonight. Make an outing of it and enjoy this fire-starter; and possibly a chance for comment from the director.