It's been days since Kgethi Nkotsi's album Maswitsi was launched at the Durban Alliance Francaise and he finally finds time to pick up the phone and talk. I'm sitting with a glass of wine, waiting for him to conclude a chat, when he shouts from the background, "Tshwara 5 ranta, ke bo kae?" as he goes about his daily activities. It appears difficult to get the trombonist and arranger's attention. I imagine this is the routine, sending a child out to purchase bread or sweets before supper, he says that it is the mundane that makes his narrative unique. The phone crackles as he comes on the line and there, that recognizable laugh, “Sorry sester, I just came back from delivering CDs”, even through the phone you can tell, what a jovial chap.

Of course, I jump right into the question that has bothered me since the first time I spoke with him about his album about a month or two before it was recorded, "Why Maswitsi?" To many, jazz is an insider's musical language; considering typecasting, jazz is heavy, politically inclined, or spiritual, and here is a fellow who insists on making it playful. This, I must say, jolts me out of my comfortable chair and familiarity. 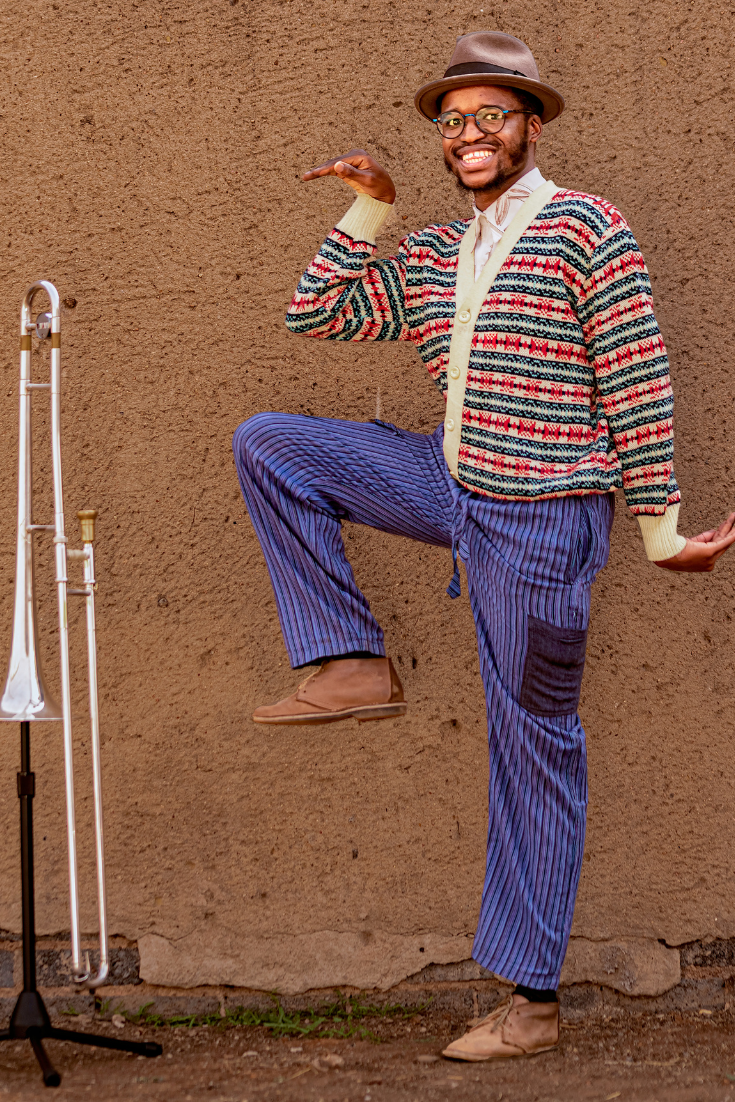 He refers to the chat I was eavesdropping on earlier and tells me how colourful his life is because he lives in the township. He then asks me to imagine a comparable scene in Ballito, which I fail miserably at. I see his point; the township is a theatre. I say this both as a performer and observer. “Maswitsi is not necessarily a genre but a type of sound; Maswitsi is a sweet sound” he states and I can readily agree that his music is delectable, his rhythm proceeds even language with dissonance and unresolved chords that can transport one all the way to Charlie’s Chocolate factory.

We delve more into the music. Nkotsi becomes a little more solemn than before, speaking of his need to be transparent and how that is more important to him than relevancy. “I’m inspired by what I know and being a kid in the township is what I know most”. His music is centered on dipopayi, and one of his notable tracks is "Re Ko Jaiveng," which is based on the popular cartoon of the conniving cat and lively mouse, Tom and Jerry. The first two parts of the song show Tom chasing Jerry, the third part shows Jerry hiding and Tom searching for him, and the fourth part shows Tom ultimately finding Jerry's hiding place and continuing the chase.

Nkotsi's music is a respite, it is invigorating, it is a breathing space and an interval before we face our daily problems, and I'm becoming used to the thought of his music being a response to the political as much as it is to the spiritual. With no malice intended, I reply to him that this is like Amapiano. With Nkotsi's music, you can't help but dance. When jazz musicians go off on long solos, the listening audience usually shifts back into a spectator role, and the performer's technical expertise tends to overshadow everything else. However, with Maswitsi, the solos lift and transport both the performer and the audience to a sublime level, where both are lifted out of their ordinary state of mind, and the music seems to just flow freely. Nkotsi speaks to the universal need to have an ecstatic experience—to step outside of ourselves, so to speak, and dancing to his music achieves this. Imagine back to when you were a child, joyfully skipping on the playground in a rhythmic pattern. This skipping is rhythmically very similar to the swing elements present in his songs.

As a fellow, Nkotsi is truly his music; artistically, he is a burst of colour with a personality to match, which he claims is why the rest of the band found it easy to interpret him. He modestly admits that he has always wanted to be a comic but that he isn't particularly funny. The trombonist began playing the trombone at the age of 16 at the Moses Taiwa Molelekwa Arts Foundation under the tutelage of Jerry Molelekwa, the late Moses Molelekwa's father, and is now a graduate of the University of KwaZulu Natal.

Nkgethi and I recall the day of the album launch: "I'm delighted my record got a stamp from the children," he says, referring to the many children who danced and appreciated his music at the event, one of whom even approached him to tell him that he is amazing. One had to be there to grasp the magic when he played “Majampa jampa” (not on the album) which is inspired by a skipping rope game, the children were ecstatic. An element worth noting in his music is the syncopation and the unexpected deviations with spaced strong beat way out of the norm adding elements of surprise and playfulness. Much like children at play, spontaneously and playfully making something up on the spot.

Kgethi Nkotsi’s album is available on iTunes and will be released on all digital platforms early January 2022. For a CD copy contact 078 408 4423

1
Politics Engulfed In Rhythm: Femi Koya
2
The Blesser & The Cursed
3
I’m Not Your Size