The Revolutionary Suicide of #JoziToStellenbosch

“We can attempt to limit the scope and range of violence in revolution by mobilizing as many partisans as possible at every level of socio-economic life. But given the hold that the ruling class has on this country, and its history of violence, nothing could be more certain than civil disorders, perhaps even civil war. I don't dread either. There are no good aspects of monopoly capital, so no reservations need be recognized in its destruction. Monopoly capital is the enemy. It crushes the life force of all of the people. It must be completely destroyed, as quickly as possible, utterly, totally, ruthlessly, relentlessly destroyed.” George Jackson, Blood in My Eye

On a cold morning on the 16th of June 2020, a few young men and women gathered at the Avalon Cemetery in Soweto, to commemorate the June 16th uprisings of 1976. Here they visited the graves of fallen heroes like Tsietsi Mashinini. They were moving under the banner of the South African Destitute Ex-Mineworkers Forum, a forum not even two years old — that exists to assist and fight for the rights of ex-mineworkers and current miners who are being exploited by the mining industry. During the visits, they officially pronounced the beginning of their campaign to Stellenbosch, called the #JoziToStellenbosch walk. The walk is from Johannesburg to Stellenbosch, a campaign seeking to face the owners of the production of the misery and destitution that is faced by the majority of Black people in this country. To the common man, this walk may seem rather unnecessary and attention-seeking, as it will not do any harm to the owners of South Africa. But that is lazy thinking. The walk is at best symbolic — no matter what happens when they arrive in Stellenbosch, it is bound to have much more impact than they themselves can even fathom.

Historically, the mineworker is the worker who made South Africa. South Africa and white wealth are built on the backs of the mineworker, since the late 1800’s. If Johannesburg is the field in the estate, and the rural provinces the barracks of the slaves, then Stellenbosch is the big house — where massa lives in comfort through the sweat of the slave — and the only way to free ourselves is by realising that the overseers of the plantation are mere administrators (the ANC and DA) of the plantation. The enemy is the owner, who hires people to do his work. In the democratic state we live in, a buffer has been created — to hide and blame the ruling party for all the problems that Black people face — with corruption being made to seem as the core problem for the sufferings of the downtrodden (who are left out on the peripheries of the economy). Recognising the true enemy and going after them, in this context, is not only revolutionary, but requires a certain amount of courage — for you will be given all manner of labels, and deemed insane.

Stellenbosch is like Greenville, Mississippi in the American South. It is the home of racists, the home of the Broederbond — where the architects of Apartheid; the owners of whatever we consume, from the toothbrushes we buy to the toothpastes we use, the soap we wash with, the cereals we eat in the morning, the clothes we wear and the media we consume, live. Stellenbosch operates in such a manner that even if you seek an alternative to whatever you want to procure, they probably own it too. Our lives are embodied and enclosed by the Stellenbosch Mafia’s narrative, whether we like it or not — and this narrative is anti-Black, anti-poor and anti-socialist. But like every oppressed society, we have weapons, and their deadliness varies. Now these youths chose to walk during an epidemic, in the peak of winter — from the cold highveld of Gauteng to the cold wet mountains of Stellenbosch. They left their comfort, even though there’s nothing comforting in the lives of black people. They could have hired a taxi and drove to Stellenbosch, but they chose to walk — because walking highlights the daily struggles that the poor working class go through every day. From getting up as early as 3am, to go and break their backs for the companies of white men who live in their glass houses in Stellenbosch, to coming back to their sardine shacks and having nothing to show for it. They are dispensable; they are replaceable. Their humanity is consistently denied and so sometimes they revolt. It doesn’t matter how spontaneous the revolts are, and the revolts always end. Some leader sells out, and they go back to the plantation. It is a never-ending cycle. Union Bosses, in bed with the owners of production. It is the system itself. 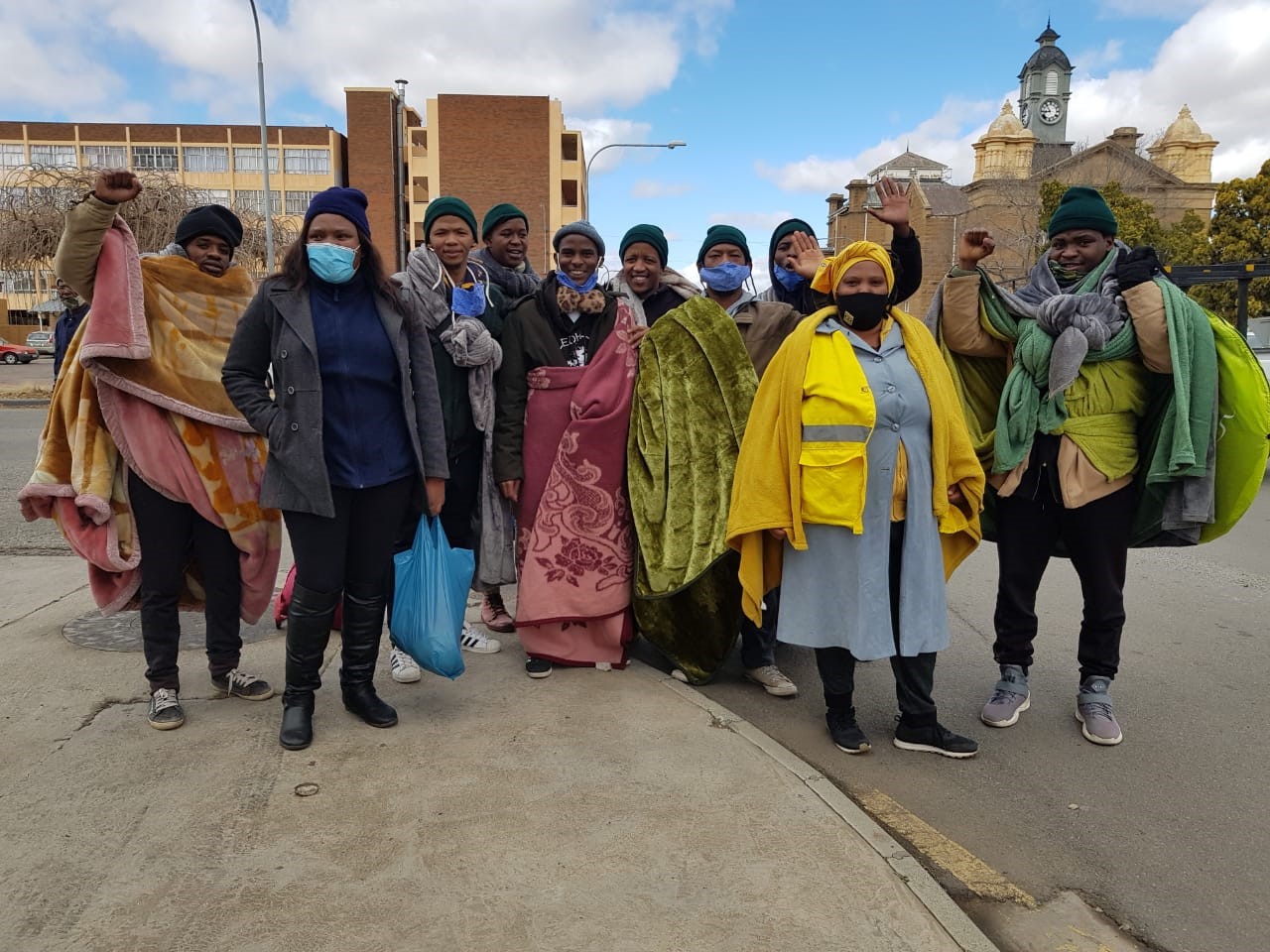 But every now and then (though not often enough), a revolutionary spirit sweeps across the country — and captures a few young minds fertile enough for it to bloom and blossom. It is the revolutionary spirit of Huey Newton and Bobby Seale, the spirit of Stephen Bantu Biko and Che Guevarra. The spirit of George Jackson and Mao Tse Tung. It is a spirit that refuses to watch things carry on the same, as usual — and it believes the youth only have themselves — and the sooner they realise this, the better. It is the spirit of revolutionary suicide. Revolutionary suicide, as Huey P Newton proclaims, “does not mean that I and my comrades have a death wish; it means just the opposite. We have such a strong desire to live with hope and human dignity, that existence without them is impossible. When reactionary forces crush us, we must move against these forces, even at the risk of death. We will have to be driven out with a stick”. For the youth of #JoziToStellenbosch, it is the spirit of undertaking a journey, traversing half the country by foot — conscientising the people whenever and wherever they stop to refresh. The walk itself is what raises awareness, about the hellish conditions that the people live in. The walk is an act of sacrifice, and it instils courage within the comrades who are walking. It is a spirit all politicians claim to have but fail to grasp… because it demands sacrifice.

Some here will argue this last point, but some politicians had their own ‘revolution’ and are now ‘in charge’ of the country. South Africa has never had a revolution; it has had revolutionary moments. This is a fact. It is how you get power, that will eventually determine what you do with it. There are also those who keep on exposing their reactionary proclivities, asking stupid questions like, when they get there, what are they going to do? Do they have a list of demands? It is this attitude that has kept the neoliberal way of politics intact. Why demand things from your oppressor, when you know he will not grant them? Why demand things, when the only thing you should be demanding, with your life, is your freedom? The time for sitting and negotiating with your oppressor, before you even retaliate, is over.

I know these young men who are walking, but I’m afraid and excited that I might not know them when they come back. Their level of consciousness could have undergone the kind of paradigm shift that can only happen when one chooses to actively undertake struggle. It is this shift in thinking, that happens through struggle, that must be spread out across the country. We know, they too know — that the walk is not only about arriving in Stellenbosch, and throwing those stones at the fragile institutions that own our lives and keep us in bondage. No, not just that, it is the journey that will give clarity to what must be done — for we sit for hours, days, weeks and years, asking ourselves these questions — thinking it is some easy intellectual question that can be solved by answers worked out through studies instead of experience. So whilst the walkers continue with their journey, some will join and some won’t be able to — and the ones who won’t be able to, must in their own stations raise awareness about the campaign — because it is about the lock and key in the enslavement of black people in South Africa.