Looking at a photograph is about listening and then looking. One has to listen to what the photograph wants to say before imposing anything on it. It is about how the ear catches the whispers and shouting that escape beyond the edges of the frame. It is about staring at what is there, what is not there, what could be there, what needs to be there. Turning Heads, Kgomotso Neto’s photography series inspired by black people and how they groom themselves on sidewalks, taxi ranks, malls, can only be viewed in this discipline. “The idea came from how a lot of us groom ourselves in the streets, in the city and the township. We cut hair, do nails, buy wigs in the streets. It’s always cheap and affordable to get yourself looking good in the streets to the point where your hairstyle turns heads, also I don’t know how my salons I’ve seen in the hood called ‘Turning Heads,’ that’s where one element of the shoot came from”. Neto explained.

After seeing the photographs that make up the Turning Heads series, returning to them every other day, for two months, they flood back in a collage, in the order that they had been played out, and then in their own order that they insist on. There is the photograph with the Afro comb sticking out, the one with hair hiding the face of the model, and then another, a close up. These and other photographs appear and reappear as they want to. 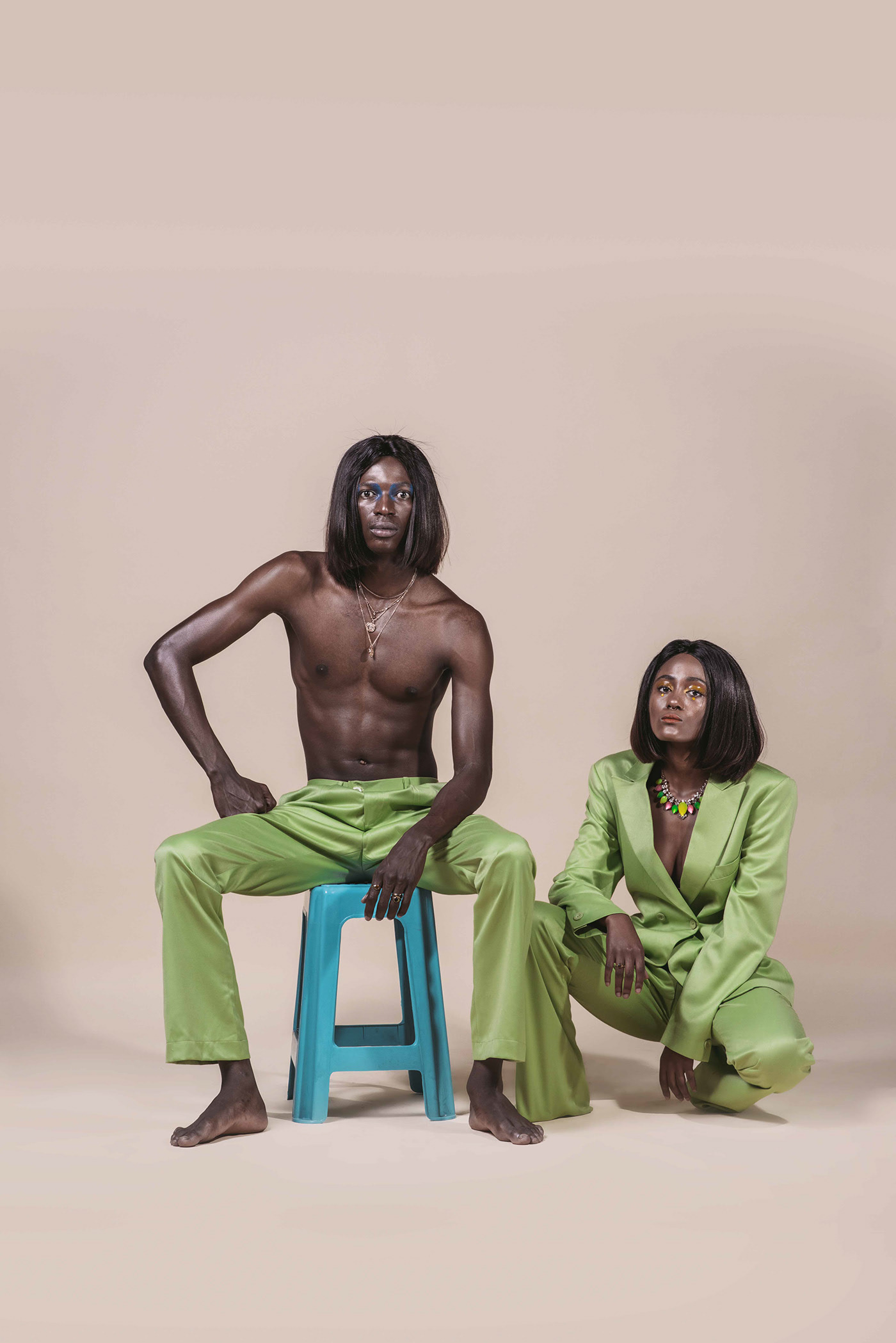 “I operate mostly on intuition,” he summarises his process over email. That quote should tell the story of a photographer who shoots with his heart rather than his finger. Everything else about his process is much more calculated. The framing is never an inch off, the lighting never a shade darker than it was meant to be, the clothes never fold in the wrong place, in a pose, the limbs, the body, fold exactly where they need to.

“The most important thing for me is to represent what I’m photographing in the most truthful and honest way possible. The photograph needs to be a true reflection of the situation at hand” Neto says.

Truthful and Honest. Those two words, in their form, in their extended form, in their realistic form, in their speculative form, exist in every photograph that Neto has made, from editorial work, to behind the scenes photographs, to corporate photographs. There is always a glint of the subject’s soul in their eyes, painted in tiny thousand pixels, a kind of a puzzle, of every moment in that person’s life, photographed together as a single expression. Technique is easy to master, one can master through repetition and be pedantic about photography rules. This, photographing with the heart, what Neto does, is elusive and unattainable.

Throughout his photography career, he has photographed black people in unpretentious and evocative ways. It is difficult to do that, to cut through the bullshit, the photography stylistic obsessions, and capture what lies beyond that, the fabric of black people’s existence. He has managed to negotiate this in editorial shoots, with fashion editors, make ups artist, creative directors, whose aesthetic sense might not align with his. In Turning Heads, in every sense of it, it captures his every sense, that of being inspired by the evanescence swagger of black people and their narratives.

“I’ve always had my hair cut in the streets or at a local barber in my neighbourhood,” Neto continues.

“The experience is always similar and the process of getting my hair cut is almost always the same - paging through a fashion magazine while waiting for my turn, getting seated on a swivel chair or if I’m in the street, it’s most likely to be a small colourful plastic chair. Once it’s my turn, the barber would first throw a protective sheet over my shoulders before he proceeds to clean the clippers with methylated spirit and a tooth brush. He would then begin to cut my hair. I usually go for a chiskop. When he is done, he would hand me a small mirror so I can look at myself and see if I’m satisfied with his work. This is just my experience with cutting hair.

A lot of people go through different experiences when grooming themselves in street salons. Some go to have their hair straightened with a relaxer cream such as Sofn’free, some to get braids/wigs, others to just wash their hair and the process is always different for what you’re getting treated for, but the result tends to always be the same - when you’re done, you leave feeling good about yourself and chances are you might Turn Heads along the way.” Neto explains.

Street salons, characterised by a single chair on the pavement, have tucked themselves into the fabric of the city of Johannesburg. On pavements, grooming machines hum, playing a part in the chaotic orchestra of the city. Hair extensions flap in the wind— dancers of beauty — a hand frantically weaving a pattern of hair — the hairdresser’s eyes scanning the crowds — hunting for another customer. Hair patterns are weaved into heads, to the soothing touch of the rays of the sun, and the mix of conversations.

Removing the narrative of how black people groom themselves on pavements, malls, shopping centres, taxi ranks, and locating it in studio, as Neto has done in this series, does not strip the reality of these establishments. The photographs move between double and single shots, of the models, Poelo and Dimpho Mashile, to single shots, in different poses, in clean single coloured wardrobe, the grooming process of salons is captured beautifully. The clothes were made by Didintle Ntshudisane, a stylist, adhering to Neto’s colour palette.

“I don’t usually do editorial studio shoots, at least not for my own personal work. I wanted this to be editorial, so I chose a colour scheme to work with, there were specific kinds of models I wanted to work with on this one, which are people with strong defined facial features,” Neto says.

The clothes are minimal, straight cloths, no extravagant patterns to them. There is a repetitive reality that they capture. The same reality of the salons across the city of Johannesburg. These salons have the same language and aesthetic. They are not extravagant. They are not by any means high end establishments. What forms their nucleus is the many black people that emerge into the streets looking fly, as if the sun that morning has only risen only for them. Emerging into other worlds, perhaps foreign to the salons, yet, these salons, in their distant silos, carve black people into the beauties that they deserve to be. 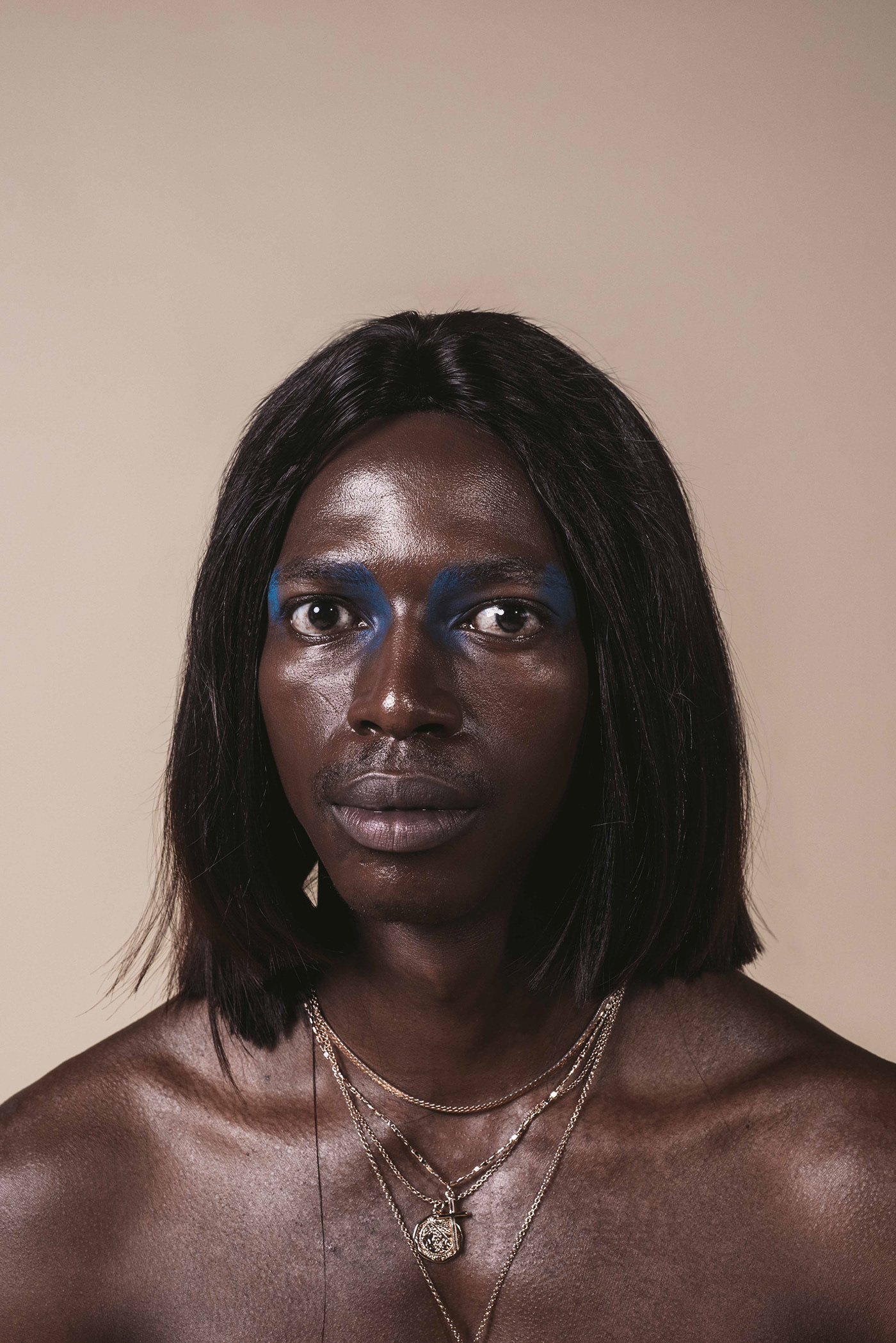 Looking and listening to these images, there is something else, at play, a poke at the ideas of masculinity and its ridiculousness. This doesn’t seem deliberate, instead of sips into one, until one cannot look at the images without seeing it. The male model, in a wig, in most of the images, stands upright, arms rigid, gaze fixed to the camera, being present, and further, after accomplishing that, poking holes at the rigid ideas of masculinity.

There are products that black people are familiar with, from hair products, to skin creams, to sickness remedies and Turning Heads captures it, by placing these objects within the frame. There is the methylated spirit, the Afro comb, Dark and Lovely and Easy Waves. In placing them, there is no desire to explain them, not even a suggestion at fixating on them, they are there, as they have always, all of every black person’s life.

Turning Heads is aesthetically beautiful, and it in every way captures the magic of black people, but the project leaps into other realities. It tells the story of the economics of black people. These street salons are means to create employment, for those people who own them, who work in them, and in those who come into them to groom themselves for job interviews.

There are many ways to read the photo series, suggested here, some not suggested here, but what is clear here is that Neto is representing and interpreting a black experience that most if not all of black people are familiar with. And that he has made the decision to shoot it in studio, to gloss it up, captures the beauty of it, the kind of beauty that often times can be missed, even by those who exist within it. 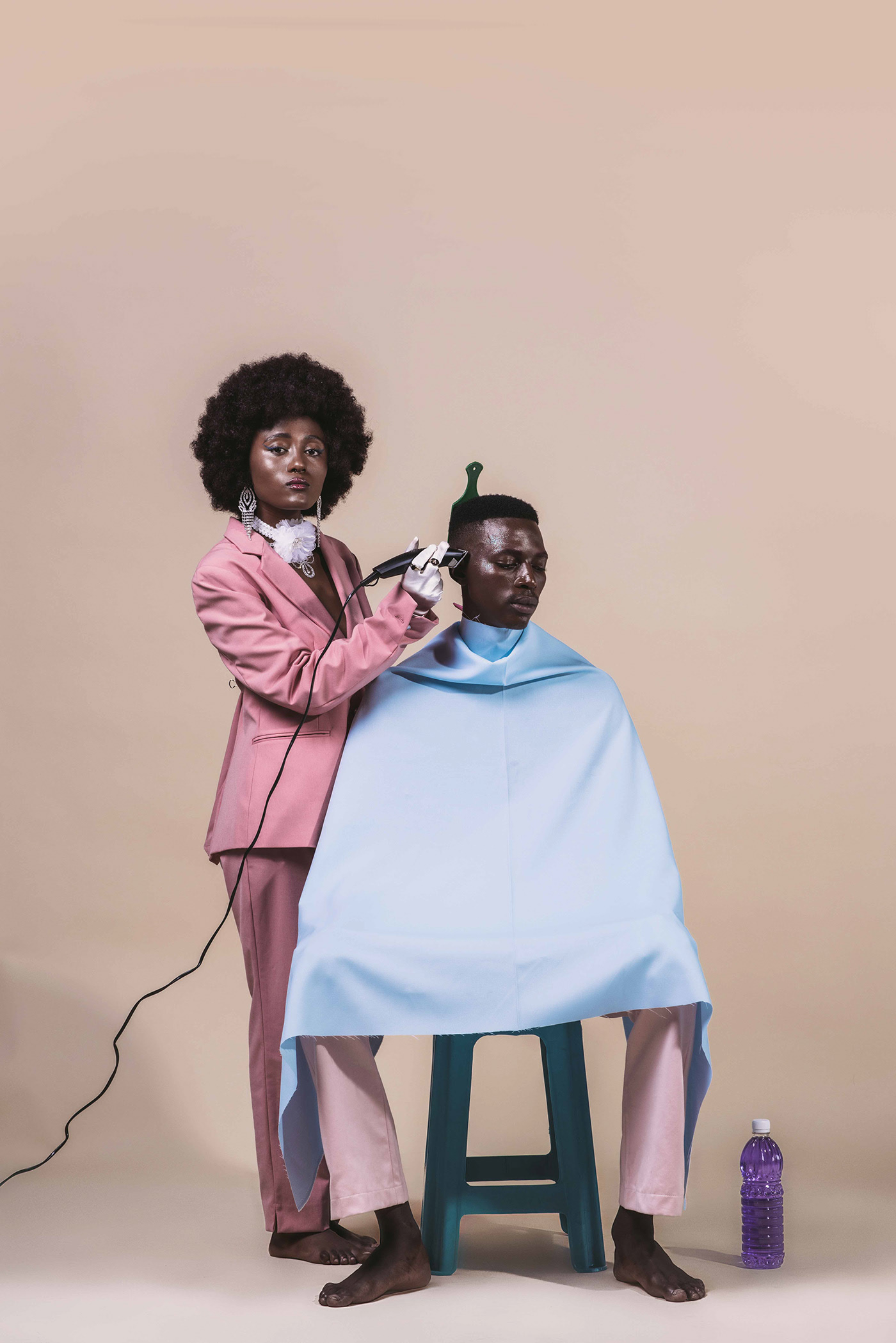 This project is about blackness and nothing is more beautiful than the many different fibres of blackness.

1
Sacrificing The Self for The Whole
2
Turning Heads